FitBit's recent selloff makes it a tantalizing value amid the tech sector's typical lofty multiples. However, its heightened risk profile could imply that more pain lies ahead for this fallen IPO star.

Having declined by a shocking 36% so far in 2016, Fitbit (FIT) is probably not going to have its best year on record. And after a particularly bruising start to the week, Fitbit shares now trade below their IPO price. 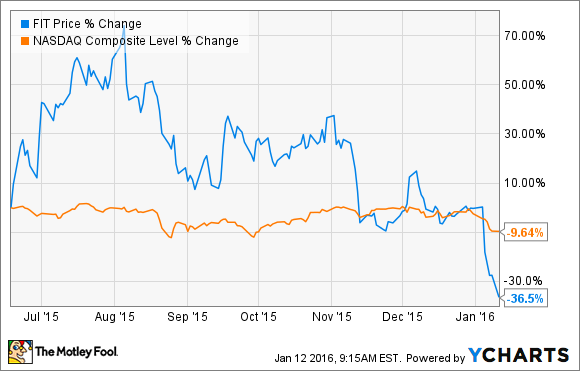 But for investors, this where things get interesting, as superinvestor Warren Buffett has reminded us that the market sometimes creates opportunities to buy great companies at or below fair prices. Has Fitbit's sell-off created an opening to snap up shares on the cheap? Or could the risks that dragged it downward still loom large?

Inside Fitbit's sell-off
Fitbit's sell-off is largely due to three things -- the uninspiring launch of its Fitbit Blaze watch, deep pocketed competition coming to the fitness wearables space and the announcement of a class action lawsuit last week.

Though it garnered some awards in the press, especially among fitness publications, the Blaze got a more bearish reaction from Wall Street. Shares fell 5% when the watch was announced last Tuesday, though Under Armour's (UAA -1.96%) releases also likely fueled the sell-off (more on that below).

I don't think the Blaze's cool reception has so much to do with what it does, but with what it doesn't do. Beyond its core fitness monitoring tools, its only additional features are push notifications and remote music control. Lacking third-party app integrations limits the device's audience to fitness enthusiasts who are willing to part with $199, but Fitbit's Surge "super watch" already caters to that group. So the Blaze is unlikely to give Fitbit any meaningful expansion into the smartwatch space. That's a strategic oversight that investors viewed as a missed growth opportunity for the company.

Adding to what was already an uninspiring Tuesday, fitness power Under Armour also used CES as a venue to announce its suite of health tracking products, several of which will compete directly with FitBit. Under Armour's Band wearable sits somewhere between the FitBit Charge and Blaze, which makes sense given its $180 price point. And though the Band will likely serve as its centerpiece, Under Armor also launched several additional hardware devices that all integrate into its own branded health app. Given Under Armour's hard won reputation as a competitor in stealing share from Nike, FitBit investors understandably interpreted the move as unwelcome news.

Then shares plummeted again on news that a class action lawsuit had been filed against Fitbit. According to the initial press release, the suit alleges that Fitbit made misleading statements regarding the accuracy of heart-rate monitors embedded in its Charge HR and Surge devices. Fitbit doesn't breakout sales distribution by product, but those two devices and the company's Charge product accounted for 79% of Fitbit's Q3 revenue.

Time to buy?
Fitbit's valuation is now almost tantalizing for a company that dominates its niche. After its recent sell-off, Fitbit is valued at only 16 times its 2016 earnings estimates. The company's long-term outlook remains largely positive, current legal risks notwithstanding, since it appears the threat from smartwatches might be overblown.

The company could also be on the verge of reporting a monster quarter. Its application became the most downloaded app in Apple's App Store in December. That performance is a proxy for sales and points to ongoing business momentum for the company.

When it comes to the risks, I'm more concerned about the looming class action suit than about the Blaze's strategic and product-specific shortcomings. The device is unlikely to pose any financial threat to the company, but the same can't be said for the lawsuit.

Fitbit only disclosed that the Charge, Charge HR, and Surge represented the bulk of its sales in its most recent quarterly report, so getting a sense of their importance to the company in the roughly one year  they've been on the market would be guesswork. Adding to the complexity, it isn't clear what the extent of the damages facing Fitbit could be. Without enough details, its impossible to create a credible estimate of potential liabilities.

So while Fitbit's newfound affordability seems tempting, the spectre of increased competition and heightened legal risk make it likely worth waiting to see how each scenario evolves before buying.

Andrew Tonner owns shares of Apple. The Motley Fool owns shares of and recommends Apple and Under Armour. Try any of our Foolish newsletter services free for 30 days. We Fools may not all hold the same opinions, but we all believe that considering a diverse range of insights makes us better investors. The Motley Fool has a disclosure policy.