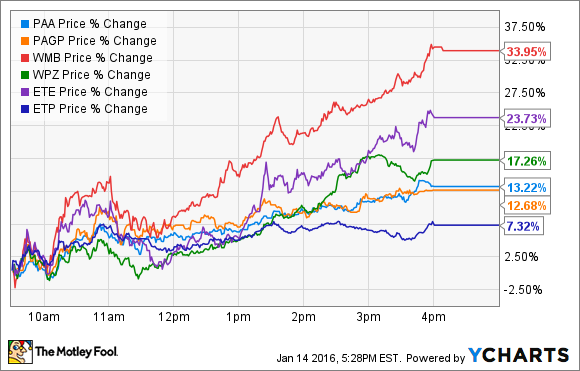 So what: Today's big jump follows huge declines starting on Monday that saw shares of Williams Companies, Williams Partners, and Energy Transfer shares all down more than 25%, while the Plains entities fell 10% and 13%, respectively. The keys behind the declines were well covered by fellow Fool Tyler Crowe yesterday, but can be summed up as follows.

Shares of the Plains entities declined because of a massive $15 billion private-equity-financing deal that it used primarily to support its distribution (MLP-speak for dividend). The new capital was in the form of convertible debt, which pays an 8% yield, and is convertible to shares after two years. News of this equity deal was quickly followed by downgrades from analysts at both JP Morgan and Stifel, and the market's initial reaction was yesterday's bloodbath.

As for Williams and Energy Transfer, the ups and downs are tied to the pending acquisition of Williams by Energy Transfer, and a recent downgrade of Williams' credit rating to junk status, and Williams Partners to just above junk rating. Many fear that this could deep-six the whole deal, as it seems likely to have a negative impact on Energy Transfer's credit rating, which would create havoc for the company when it comes to raising more capital.

Now what: While some bad news -- or at least news the market took as bad, or with a potentially bad implication -- was behind this week's sharp declines for these midstream MLP stocks, there wasn't really any corresponding "good" news today to send them bouncing back. Add it together, and it's been a really noisy week. 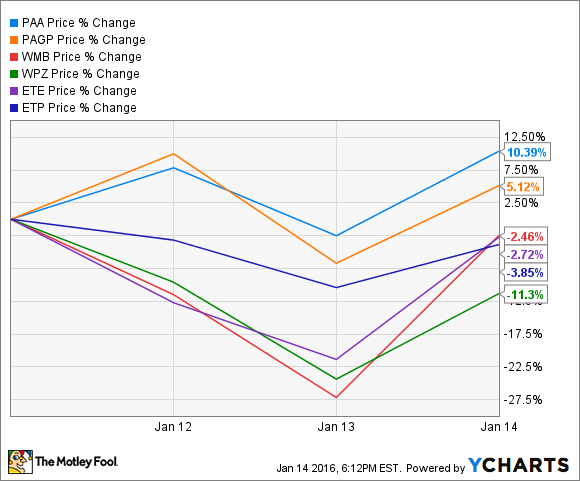 Frankly, not that much has really changed. Plains kicked the cash-flow problems can down the sidewalk with its debt deal, and there are fears the Energy Transfer/Williams acquisition could fall apart; but it's largely just uncertainty right now.

Bottom line? All of these entities are part of a group of midstream MLPs that have highly leveraged themselves during the past few years, binging on cheap debt to quickly expand. But the recent collapse of energy prices has the market fearful -- and probably rightfully so -- that these pipeline operators won't be able to grow, considering all the debt they now have taken on.

It's better to avoid these as a group for now. There are better-capitalized, less-at-risk places to invest today.