Federal Reserve Chair Janet Yellen is expected to preside over a new period of rising rates.

In late 2015, the Federal Reserve voted to raise interest rates for the first time in almost a decade, and heading into 2016, the prevailing sentiment was that rates would be increased several more times this year, and that this trend would probably continue in years to come, depending on a few key economic factors.

But with fresh uncertainty about the strength of the global economy shaking the markets and sending both the Dow Jones Industrials and S&P 500 down more than 6% as of this writing, there are real concerns that higher rates could be coming at a time when the economy is unable to handle them, leading to slower growth in the U.S. and stalling a labor market that's only recently shown signs of strength.

What can Americans expect going forward? It's not a simple question, nor one with an obvious answer. Here's a closer look at what it all means, and how it could impact you. 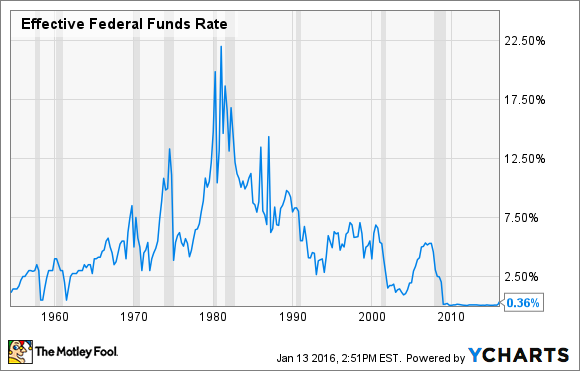 In other words, this is the underlying rate that much of the economy functions off of, since it affects the cost of capital for the entire banking sector. Think about it this way:

If a bank lends capital at the overnight funds rate, it receives interest based on the fed rate. The higher the rate, the more it gets, and vice-versa. This comes back to consumers, because this is a major part of what determines the interest rate consumers receive on savings, checking, certificates of deposit, and other fixed-income instruments.

It works the same way when a bank borrows money. It must pay interest in order to get those funds, so it must charge a higher rate on what it lends in order to cover its borrowing costs and expenses, and make a profit.

What it means for you
The costs of capital for banks and their borrowers have been at a historic lows over the past seven years. That has meant cheaper mortgages and car loans for consumers, but also lower yields on savings.

It has also led to lower bond rates, which has been both good and bad. The good of lower bond rates is that businesses have had access to lower-cost capital, which they can use to expand operations, hire new employees, and undertake other economically stimulating activity. At the same time, many businesses instead have used those funds for things like increasing dividends and share buybacks, which provide a one-time benefit to investors, but don't necessarily provide long-term economic benefits.

The bad is that lower interest rates mean lower bond yields, which is a negative for fixed-income investments such as bonds and bond funds. With many Baby Boomers entering or nearing retirement, lower yields in fixed income instruments can impact retirement income.

So far, the recent rate hike has led to an increase in borrowing rates on mortgage and credit cards, but deposit rates on most savings accounts and CDs have yet to rise much. There are two reasons why this is the case. Lenders must recoup higher costs on lending, so you'll generally always see borrowing rates move more quickly with relation to changes in the fed rate, but since the fed funds rate remains at a very low level today -- between 0.25% and 0.5% -- there's very little wiggle room for deposit institutes to raise rates.

What to expect is hard to predict
The Fed is likely to increase rates further in 2016. As Dan Caplinger wrote in December, investors in futures tied to short-term rates have overwhelmingly put their money behind a rate hike in March, and for the fed rate to be near 1% by year's end. That could be conservative: The FOMC (the committee that controls policy for the Fed) has projected a 1.4% median rate by year's end.

At the same time, there are concerns about the state of the global economy. Fears of a weakening Asia -- particularly China -- are key drivers behind a huge decline in U.S. stocks to start the year, but the repercussions are much larger than just stock prices. China is both a major supplier to and consumer, as the second-largest economy in the world. If Chinese growth stalls more -- or more quickly -- than expected, it could impact the U.S. economy, and slow the Fed's rate increase projections.

And while that would be good for borrowers, it would mean a continuation of the low yields savers have gotten for nearly a decade.

Looking ahead: Rising rates would be a good sign
If the Fed is indeed able to continue increasing rates in 2016, that would be a good thing. Yes -- borrowers would pay higher rates on credit cards and home and car loans, while not seeing much of a bump in yields on deposits, but the Fed is only likely to increase rates if the U.S. economy remains strong, and job growth and income growth is steady. Besides, even if rates do increase at the FOMC's own projections, consumers would still have access to some of the cheapest capital in American history.

If rates don't go up much this year, that would be a bad sign for the economy.