Find out why LNG Tanker MLPs have been unfairly beaten down along with oil prices, which three are worth buying today, and which one should be avoided. 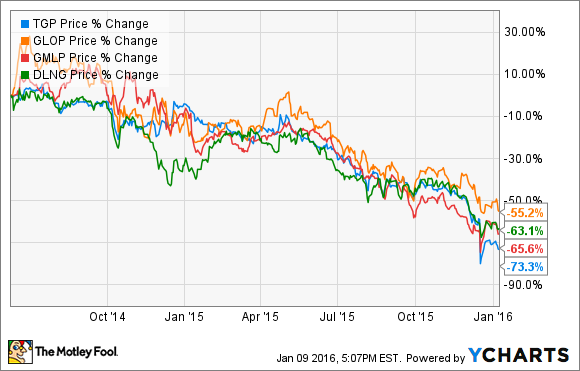 Find out why three out of the four of these LNG Tanker MLPs are potentially worthy long-term investments today, and which one is best for income investors to avoid.

Wall Street doesn't understand the business model
The way the market has treated these MLPs, you'd think their cash flows were dependent on volatile energy prices. In fact, all four are actually seaborne midstream MLPs, with cash flows protected under long-term, fixed-fee contracts that make for more stable distributable cash flow (DCF), which is what funds the payout.

Even better, the market for global LNG trade is expected to grow massively over the coming years, with nine export projects coming online between last August and the end of 2016 alone.

Any way you look at it, LNG tanker MLPs are trading extremely cheap right now. Normally, MLPs trading at between 3.5 and 7 times distributable cash flow or 2 to 4 times operating cash flow would indicate something very wrong with the underlying business, such as shrinking cash flows or a highly unsustainable payout that was in imminent danger of being cut.

Yet when we look at the payout profiles of these MLPs, we see that three out of the four are in a position to maintain their payouts.

With valuations ridiculously low right now, a good case could be made that even a massive payout cut would still make three of these MLPs attractive long-term buys, but if they can sustain their payouts -- which I believe they have a reasonable chance of doing -- then the potential long-term total returns truly become exceptional.

Note that those numbers take into account Teekay LNG Partners' recent 80% distribution cut.For businesses with seemingly sustainable coverage ratios and stable DCF, which is not affected by commodity prices, I think it's ludicrous for GasLog, Golar, and Dynagas to be trading at such distressed yields.

Granted short-term fleet growth is likely impossible with access to equity growth capital cut off right now. However, simply collecting steady income over the next few years is more than enough to make these MLPs worth considering. Then again, the market may be reacting to Teekay LNG Partners' recent slashing of its payout, which has created fear that their underlying MLP business model may be broken.

However, when one looks at the reasons for Teekay's payout cut, it becomes obvious that the risk to its competitors' distributions are overblown.

Why Teekay LNG Partners is the worst of the bunch

There are two primary reasons Teekay LNG was forced to slash its distribution so severely. First, because of its high leverage ratio, management wasn't confident that, with its access to equity markets essentially shut down, it could borrow enough cheap debt to fund its $1.75 billion in contractual obligations through the end of 2017, 71% of which was to pay for new tankers.

Teekay's return on invested capital (ROIC) is so low that likely higher interest rates on new debt could make its new capital expenditures unprofitable, and thus it was forced to rely on its own cash flow to help pay for its high short-term capital expenditure budget. Of course, given that its excess DCF under the reduced payout comes to just $210 million, the MLP will still be forced to raise additional growth capital, probably at higher costs, regardless of the payout cut.

In comparison, its competitors have no upcoming capital expenditures, and in fact, Golar LNG Partners' management recently issued a statement reassuring investors that it intended to maintain its present payout.

Such guidance must always be taken with a healthy dose of skepticism. However, Golar LNG Partners, GasLog Partners, and Dynagas Partners have just $717 million, $590 million, and $158 million in respective contractual obligations through 2017, almost all of it maturing debt. These smaller obligations give me increased confidence that they will be able to sustain their payouts until oil prices recover and reopen access to equity markets.

Note that GasLog Partners' high leverage ratio does make it the riskiest of these three MLPs, since, should oil not recover within the next few years, management may be forced to cut the payout to focus on paying down debt.

That said, given their current highly predictable, and growing, cash flows locked in under long-term, fixed-fee contracts, I think all three of these MLPs are trading at extremely undervalued levels that could result in highly attractive total returns over the next five to 10 years, even if distribution cuts do become necessary.

Here's Why LNG Shipping Stocks Fell as Much as 52.1% Today