Lockheed Martin beat the odds to grow revenues as defense spending plunged. Now, what are the odds of a dividend hike?

Defense spending is down in the United States, and that could be bad news for defense companies like Lockheed Martin (LMT -0.40%). After more than doubling through the first decade of the 21st century, American military spending began to slide about five years ago. Current Pentagon projections suggest spending won't return to 2010 levels for years -- if ever. Even worse for investors, tight budgets at the Pentagon have a way of "trickling down" to the defense contractors who service the Department of Defense.

If that trickle should become a flood, it has the potential to wash away hopes for rising dividends among some of the nation's most-generous dividend payers -- and none more so than Lockheed Martin.

The Daddy "War" bucks of the defense industry
Boasting a dividend payout ratio north of 53%, Lockheed Martin is the most-generous dividend payer in the entire U.S. defense industry. With a payout ratio of 43%, Boeing (BA -0.88%) comes closest to Lockheed levels of generosity; but even Boeing is only a part-time defense contractor. Two out of every three revenue dollars that Boeing collects come from its commercial airplanes division.

As for Lockheed's other defense industry peers? Northrop, Raytheon, General Dynamics -- not one of them comes close to returning as much of its net-income cash to shareholders in the form of dividends as does Lockheed. During the past 12 months, out of the $11.27 per share that Lockheed Martin earned, a full $6.15 of that went straight to the shareholders in the form of dividend checks, continuing a trend that has seen Lockheed Martin raise its dividend by double-digit percentages 13 years in a row. 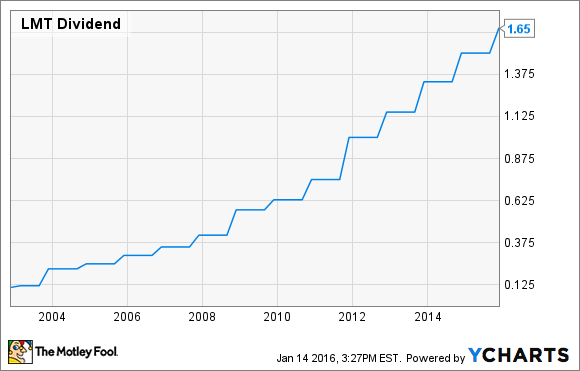 Defense drought
Can they do it again? In an era of stagnant-to-declining defense expenditures, can Lockheed still afford to lead the pack in dividend payouts? Let's take a look.

During the past five years, as U.S. defense spending slumped 19%, many defense contractors felt the pinch. Revenues at Northrop Grumman were hardest hit -- down 15% in five years. But pain was felt far and wide: Raytheon's revenues dropped more than 9% from 2010 to 2014, L-3 Communications dropped 9.5%, and General Dynamics was down 5%. At Lockheed Martin, though, the story was a little bit different.

By 2014, the defense-spending slump caught up with Lockheed, driving revenues (slightly) below 2010 levels. But that didn't last long at all. At last report, Lockheed's trailing revenues were once again trending higher, with $45.8 billion recorded during the past 12 months.

An oasis in the desert
As it turns out, even in the midst of a general defense-spending drought, America's biggest pure-play defense contractor is looking quite healthy today. Revenues are on par with what they were five years ago -- and they're growing. According to data from analysts polled on S&P Capital IQ, even as the rest of the defense industry contends with stagnant defense spending, Lockheed is expected to see revenues rise by as much as 22% through 2019 to well over $55 billion.

Combined with Lockheed Martin's long history of raising dividends in good times and bad, that revenue "visibility" will likely give Lockheed Martin the confidence it needs to keep growing its dividend in 2016 -- and beyond.

Fool contributor Rich Smith owns shares of Raytheon. You can find him on Motley Fool CAPS, publicly pontificating under the handle TMFDitty, where he's currently ranked No. 255 out of more than 75,000 rated members.