Historically, the gaming industry has been a high-risk corner of the market, suitable only for investors willing to watch debt-ridden companies bet that multibillion-dollar resorts will pay off in spades.

Today, the industry is still very risky, but the calculus has changed for investors. Companies like Las Vegas Sands (NYSE:LVS), Wynn Resorts (NASDAQ:WYNN), and Melco Crown (NASDAQ:MLCO) all have manageable balance sheets, strong cash flows, and even regular dividends for investors. Maybe the new world of gaming is the high-dividend yield play.

The dividends in gaming
Based on the most recently reported dividends, Las Vegas Sands' is the leader in the clubhouse, with a yield of 6.7% today. Wynn Resorts yields 3.9%, even after slashing its dividend in 2015, and Melco Crown yields a less impressive 0.5%, which I'll cover more in a minute.

When it comes to dividends, Las Vegas Sands is clearly the leader and has already said it'll increase its dividend from $0.65 per quarter to $0.72 per quarter in 2016. So, investors buying today will get an implied yield of 7.7%.

All three companies are paying dividends now because they're generating large amounts of cash flow and don't have burdensome debt loads. In fact, if it weren't for Wynn Resorts adding debt to build the $4.1 billion Wynn Palace and Melco Crown adding debt to build the $3.2 billion Studio City, which just opened, the debt loads below would look even more reasonable compared to $1.25 billion and $974 million in EBITDA, respectively. 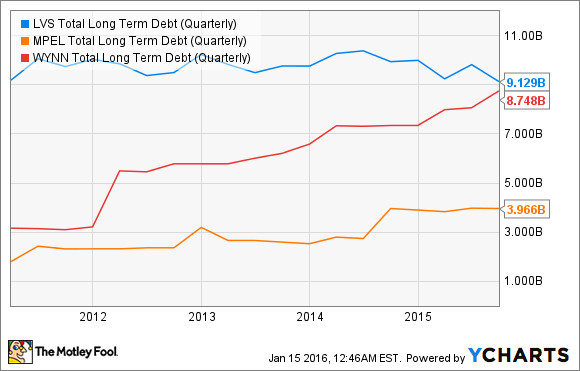 Despite the reasonable debt levels and strong dividend yields from Las Vegas Sands and Wynn Resorts, gaming dividends may not be built like other dividends.

What you need to know
Some companies that pay dividends view them as sacrosanct. But gaming companies have shown that they feel differently, so even if you're attracted to the yield opportunity today, don't think that they won't cut dividends when operations flounder.

Last year, Steve Wynn cut Wynn Resorts' dividend by 66% to $0.50 quarterly, and Melco Crown's payout has been volatile because it pays about 30% of net income as a dividend, which is why its dividend almost vanished after Q3 2015. Las Vegas Sands hasn't made any signals that it'll cut its dividend soon, but gaming companies seem more willing than most to reduce dividends when profits decline.

Long term, that's probably a good strategy for gaming companies because it keeps them from prioritizing a dividend over the health of the balance sheet.

As the market plunges in early 2016, if you're looking to add a little risk and get a dividend along the way, you may want to reconsider gaming stocks. They're relatively new to the world of dividends, but you can get a high yield if you play the industry right.