Please ensure Javascript is enabled for purposes of website accessibility
Log In Help Join The Motley Fool
Free Article Join Over 1 Million Premium Members And Get More In-Depth Stock Guidance and Research
By Brian Feroldi - Jan 17, 2016 at 8:00AM

It was another rough week for healthcare ETFs, but this fund held up better than the rest.

Image by stevepb via pixabay.

It was another rough week to be an investor, as stock markets took another step back. The S&P 500 continued to slide as it shed another 1.83% of its value during the past five trading days.

Healthcare investors fared even worse, and many exchange-traded funds that focus on the sector dropped far more than the index. However, one healthcare focused ETF -- the Health Care Select Sector SPDR ETF (XLV 1.28%) -- held up better than most, as its comparable loss of only 1.32% allowed it to keep ahead of the S&P 500 this week. 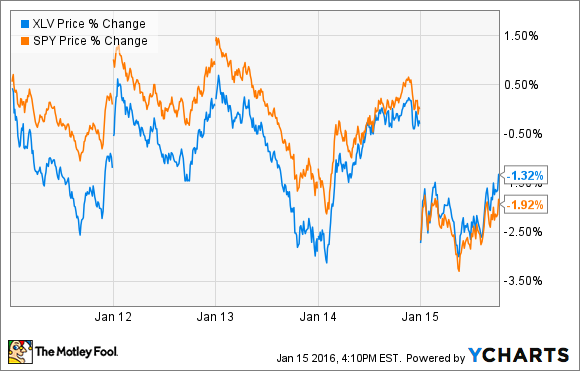 What's going on inside the Health Care Select Sector SPDR ETF that allowed it to hold up so well?

Cracking it open
The Health Care Select Sector SPDR ETF is one of the biggest and most-popular healthcare ETFs out there, as it currently manages more than $12 billion. This fund's goal is to track the performance of healthcare stocks within the S&P 500, weighted by market cap.

While this fund currently holds positions in 57 different companies, it is actually fairly concentrated. A look at this fund's top 10 holdings is telling:

As you can see, this ETF keeps the majority of its assets in the giants of the healthcare industry. In fact, its current weighted average market cap is north of $106 billion dollars.

What worked this week?
As you would expect during a rough week for the market, most of the fund's top holdings declined during the past week. However, a few companies managed to buck the trend and put up positive returns. 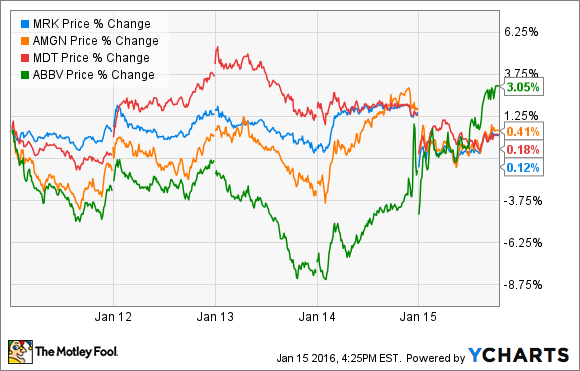 Pharma giant AbbVie (ABBV 0.37%) was the clear winner this week, as its shares ended the week up more than 3%. Two news items appear to be responsible for the surge in its share price.

First, AbbVie announced that the FDA accepted its New Drug Application for venetoclax. AbbVie submitted the drug as a potential treatment for chronic lymphocytic leukemia in adults who have received at least one prior therapy, and they granted the application a priority review. That means that the FDA should have an answer in six months time, instead of the normal wait of 10 months.

While that news was good, shares really roared higher on a news item released later in the week. On Thursday, news broke that the U.S. Patent Office rejected Amgen's (AMGN 0.02%) attempts to invalidate patents related to AbbVie's best-selling drug, Humira. Amgen is pushing to bring a biosimilar version of Humira to the market by 2017, and it was trying to use a legal process called Inter Partes Review to invalidate two patents of Humira's patents.

Amgen hoped that, by using this tactic, it would be able to bring its Humira competitor to market on time. The U.S. Patent Office did not even formally review the move, as it believed that Amgen didn't have any chance of success.

Given that AbbVie is expecting Humira to deliver more than $18 billion in revenue by 2020, news of a competitor taking a step back was good enough to lift its shares.

Worth a look
There's a lot to like about the Health Care Select Sector SPDR ETF, as it offers investors broad-based exposure to an industry that's likely to continue to rise for a dirt-cheap expense ratio of only 0.15%. Investors who are looking for a way to bulk up their exposure to the healthcare sector should consider giving this ETF a look.