A lawsuit by two FCA dealers alleges that the automaker offered big payments to dealers willing to inflate their monthly sales numbers. If proven, the allegations will raise big questions about FCA's remarkable growth story and undermine the investment case for the stock. Should investors be worried?

Jeep sales rose an impressive 25% last year. Or did they? In a new lawsuit, two dealers say they were pressured by FCA to inflate sales numbers. Image source: Fiat Chrysler Automobiles

Automaker stocks had a tough time last week. But shares of Fiat Chrysler Automobiles (FCAU) were hit harder than most after a lawsuit by two U.S. dealers alleged that FCA has been falsifying its impressive U.S. sales reports.

Explosive allegations in a new federal lawsuit against FCA
Here's what we know: The suit, filed in federal court on Jan. 12 by a pair of FCA dealerships owned by the privately held Napoleon Automotive Group, alleges (among other things) that FCA offered to pay dealers thousands of dollars to report unsold vehicles as sold.

Specifically, according to the suit, FCA wanted dealers to report extra sales at the end of the month by listing vehicles still in inventory as having been sold. The dealers would then "back out" the sales, or cancel them, early the next month before the factory warranties on the vehicles were processed in FCA's systems.

That's a big deal. If true (and that's a big "if," as we'll see), those maneuvers would have inflated FCA's monthly U.S. sales totals, showing more year-over-year sales growth than actually occurred.

Again, if true, that puts a huge dent in the investment case for FCA. Investors have been drawn to FCA, despite its struggles in other arenas of its business, because it has shown consistently outstanding sales growth in the U.S. for several years now. That growth has given investors some reason to believe in CEO Sergio Marchionne's audacious plans for the company, in which he hopes to turn FCA's collection of regional brands into a strongly profitable global portfolio.

A credible suggestion that FCA's growth was inflated puts that whole story at risk. That's why investors around the world reacted strongly to the news when it was first reported by trade publication Automotive News late in the evening on Jan. 13. 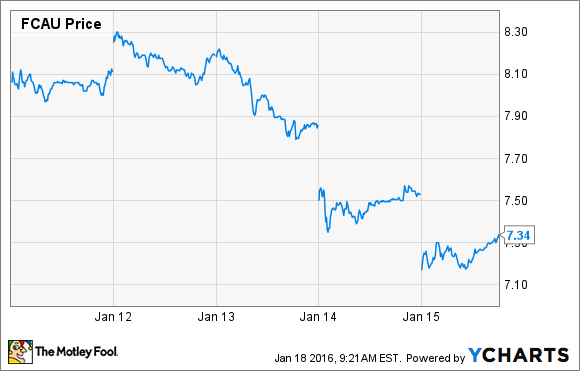 As you can see, the stock dropped over 4% on Jan. 14, and another 2.5% or so the next day as investors continued to consider the news. But again, as of right now, all of these allegations are a big maybe.

FCA denied the allegations -- strongly
"The lawsuit makes allegations of false sales reporting by FCA US," the company said in a statement released late on Jan. 14. "Notwithstanding numerous requests to provide evidence of this alleged activity, the plaintiffs have refused to substantiate their claims. FCA US carried out an investigation of the facts, and has determined that these allegations are baseless and plaintiffs were notified of this fact before they filed suit.

"This lawsuit is nothing more than the product of two disgruntled dealers who have failed to perform their obligations under the dealer agreements they signed with FCA US. They have consistently failed to perform since at least 2012, and have also used the threats of litigation over the last several months in a wrongful attempt to compel FCA US to reserve special treatment for them, including the allocation of additional open points in the US FCA network.

"FCA US will continue to resist these pressures, safeguarding the relationship of trust and openness which governs its relationship with its dealers. FCA finds it unfortunate and disappointing that reputable media would be willing to be used in questionable litigation practices without a full understanding of the facts."

OK then. So who do we believe here?

Mostly, investors don't care, because the claims aren't the kind that undermine investment cases. But this is different, because FCA has been on a big sales run in the U.S. -- despite mediocre reviews of its latest products and quality ratings that continue to be at the bottom of the industry barrel.

Old Detroit rivals General Motors (GM 2.65%) and Ford (F 2.21%) have made huge strides in quality over the last several years, becoming strongly competitive with the Japanese brands that have long been the benchmarks. But FCA has continued to struggle.

Those struggles (apparently) haven't hurt the company in the marketplace. December marked the 69th consecutive month of year-over-year sales gains for FCA in the United States.

For all of their product and business improvements, neither GM nor Ford (nor those Japanese rivals) has managed a streak like that. It's remarkable. So remarkable, in fact, that some investors didn't find it all that hard to believe that FCA might have fudged the numbers.

But did it? We don't know yet. This lawsuit was just filed. It'll be a while before we see any of the evidence. But I'll be watching it very closely.