The oil giant could keep falling even though the stock is already down 15.7% year to date.

The new year hasn't been kind to ConocoPhillips (COP 0.84%), which is down double digits in just the last two weeks. Given the market turmoil, the oil giant's stock could have even further to fall. Here are three reasons the sell-off might not be over.

Oil's bottomless pit
The price of crude oil seems to have fallen into a bottomless pit. No one knows when or at what price crude will bottom. That said, one thing investors can be sure of is that crude oil will continue to pull ConocoPhillips' stock down with it every step of the way: 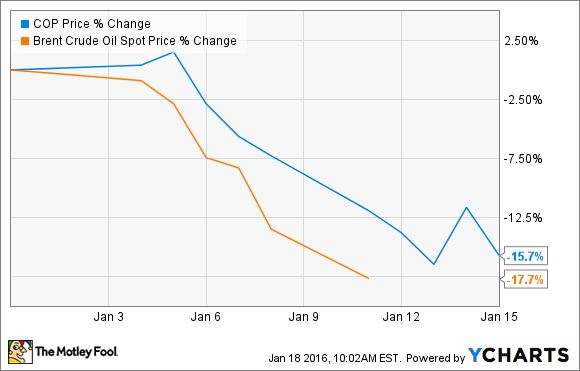 A big credit downgrade
About a month ago Moody's put 29 independent U.S. oil companies on review for a potential credit rating downgrade, including ConocoPhillips. While it expects that many companies will be downgraded by at least one notch, it could also confirm some ratings. Either outcome is a possibility at ConocoPhillips, given the view expressed by CFO Jeff Sheets earlier last year when he said:

We have ready access to the credit markets and our debt continues to trade at levels between those of A and double-A rated companies ... As we assess commodity price environments both in 2015 and for the next few years, we think it's unlikely that we'll need to increase our debt to a level that would cause our credit ratings to slip out of the single-A credit rating range, although it could move lower within the A range if we stay at current commodity price environments for a prolonged period.

According to Sheets, ConocoPhillips firmly believes its credit rating will stay in the single-A range, which does indicate that it's possible that the company's current A/A2 rating could be downgraded by one notch to A-/A3. Having said that, if it is downgraded by more than one notch, into the B range, it would likely lead to a big sell-off because it would suggest the company's balance sheet isn't as strong as it thought.

Such a downgrade would push the company into the level of smaller peer like Apache (APA 1.45%), which currently has a Baa1 rating. Apache, however, was also put on review for a potential downgrade, which is noteworthy given that Apache has the exact same proportion of net debt as ConocoPhillips: 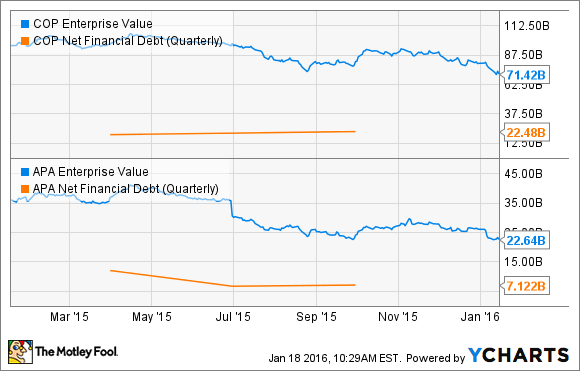 When we do the math using the data from the the above chart, we find that the net debt as a percentage of its enterprise value for both companies is exactly 31.5%, which could imply that ConocoPhillips potentially faces a downgrade to Apache's level.

Asset sales unravel
One of the avenues ConocoPhillips is taking in order to maintain a strong balance sheet is selling non-core assets. The company is said to be pursuing $2.3 billion in asset sales, which were all under agreement when the company released its 2016 capex plan in early December. However, since that time, commodity prices have continued to fall, which could put some of those asset sales in jeopardy.

While the company hasn't announced any specific sales yet, it should have some announcements when it reports fourth-quarter results in early February. However, if no asset sales are announced at that time, or the company warns on its conference call that it might not meet its target, it could cause the stock to fall because these asset sales are an important part of its funding plan.

Investor takeaway
ConocoPhillips investors should brace themselves for the potential for more downside in 2016. For some, that's an opportunity to buy more stock. However, for others, it's a warning to be mindful of their allocation because the downside risk remains despite the fact that the company is one of the strongest independent oil companies in the sector.