The competition to dominate the streaming-music industry looks poised to heat up with recent news from Apple and Spotify.

Though there will be other challengers, the battle for the future of music has currently narrowed to a four-horse race involving Apple (AAPL -0.14%), Spotify, Pandora (P), and Alphabet (GOOG -0.55%) (GOOGL -0.61%) and 2016 figures to be the year the industry sees a more mature competitive balance. With the stakes so high, investors can expect the industry's incumbents to push headlong to consolidate as many subscribers as possible in the year ahead. In perhaps the first two examples, both Apple and Spotify recently showed signs of progress in executing their respective strategies.

Apple and Spotify maintain their momentum
Though some questioned whether it had stalled after its initial rollout, Apple Music appears to have increased its subscriber growth momentum in recent months. In October, CEO Tim Cook revealed that Apple Music had gained 6.5 million paying customers since its June 30 launch. Now, according to The Financial Times, Apple Music recently surpassed the 10 million-paying-subscriber mark.

But that adoption rate looks uninspiring up against Apple's estimated 800 million iTunes accounts,  Even Spotify counts 75 million total subscribers, of which 20 million opt for paid subscriptions. Spotify has largely maintained its lead by out-innovating the competition, a strategy it again demonstrated earlier this month when Spotify unveiled a new feature called "Behind The Lyrics," a series of curated playlists the company developed in partnership with lyrics repository Genius. The tracks on these playlists source both lyrics and other interesting facts for each track, a novel feature that should allow Spotify to continue to grow its subscriber base by innovating in ways the competition can't. Last year's release of both Discovery Weekly and Fresh Finds similarly demonstrated that Spotify has the chops to innovate in the face of threats from some of the most well-funded and far-reaching names in tech. Combined, these moves help set the stage for another fierce year of competition in the space, which should make Pandora investors somewhat uneasy. 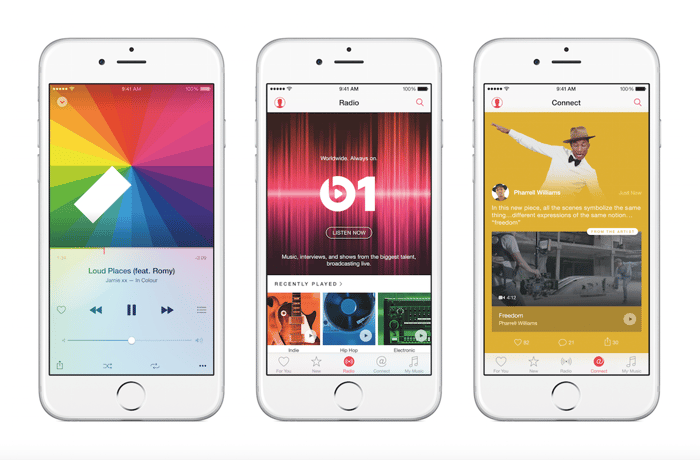 Alphabet and Pandora left in the cold?
After accounting for their recent successes, Apple Music and Spotify appear by far the strongest contenders in on-demand music today -- though, like Apple, Alphabet's twin digital-music services  both enjoy a massive installed base through which to bolster their ranks. However, it's unclear whether either of Alphabet's on-demand services -- Google Play Music and YouTube Music -- has gained a sizable following. That Alphabet has two different subscription services suggests that it has yet to develop a credible strategy to challenge Apple and Spotify. Size does have its advantages, though, and Alphabet stands to contend, given its prowess within the broader music industry.

This leaves Pandora, which also finds itself in a far stronger position going into 2016, thanks to its long overdue shift toward on-demand streaming with its purchase of the now-defunct Rdio's assets late last year. However, much like Apple Music's purchase of Beats, the time lag between Pandora's purchase of Rdio's assets and the eventual launch of its own on-demand product could eat up the bulk of the year. It took Apple, whose software development chops surely outstrip Pandora's, roughly 11 months  to transform Beats Music on-demand software into what we know today as Apple Music.

Using Apple's timeline as a rough proxy, this implies that Pandora would launch its on-demand service in late November. Doing so is a critical priority for Pandora, but given the recent momentum from both Apple and Spotify, the estimated lag will create a more uphill competitive environment for Pandora.

The interweaving storylines involving Apple, Spotify, Pandora, and Alphabet could make 2016 the most interesting year in recent memory for digital music.