Cablevision (NYSE: CVC) stocks now sits in that weird no man's land that is the time between when a company accepts a buyout offer and when federal regulators approve the deal.

In this case, the cable and Internet company that serves customer in New York, New Jersey, and Connecticut has agreed to sell itself to Altice. The French telecom company will pay $34.90 in cash per share, a 22% premium over where the stock was trading when the deal was announced, according to Reuters. That gives the company a value of about $10 billion, and Altice will assume another $7.7 billion in debt.

If the agreement gets approved -- and that's by no means a sure thing -- Cablevision would cease to exist as a stock. But, since federal, state, and even New York City regulators have pledged to examine the deal (and whether it benefits Cablevision's 3 million or so subscribers), it could very well be denied or delayed. That makes the company's stock -- even with an offer on the table that's above its current trading price -- a bit of a risk. 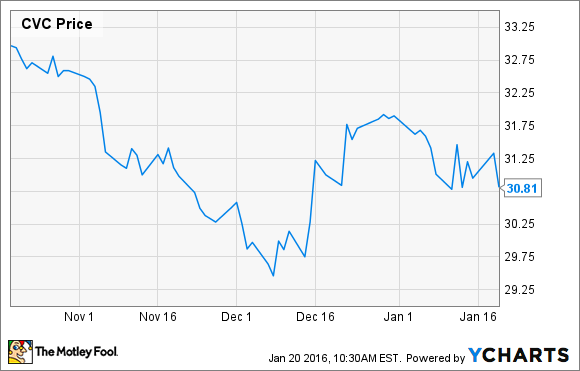 The deal could drag on
While Cablevision stock jumped when the deal was announced in mid-September, it has fallen since then largely because of uncertainty regarding not only whether it will be approved, but how long it will take for any decision to be made.

"The spread has widened in large part because people have become increasingly concerned that neither the city nor the state will find that the transaction is in the public interest, or alternatively, they'll demand so much in terms of givebacks that ultimately the deal won't be palatable to Altice," Craig Moffett, analyst at MoffettNathanson LLC, told The Wall Street Journal.

The Federal Communications Commission has been very slow to act on recent merger and acquisition deals in front of it. Specifically, it has not made a decision as to whether it will allow Charter Communications (NASDAQ:CHTR) to purchase Time Warner Cable (NYSE: TWC), a deal that was made in May 2015. That's roughly eight months ago, and there's no reason to believe a decision is coming anytime soon.

It's possible that any decision on Altice/Cablevision could wait until after one is made on Charter/TWC. That could be quite a long ways away, and ongoing uncertainty generally sends stock prices lower.

The FCC could deny Charter/Time Warner Cable
While originally it was widely believed the FCC would approve Charter buying Time Warner Cable, it's certainly possible it chooses not to. If that happens, it creates significant uncertainty for Cablevision largely because a number of pieces will be back in play.

If the TWC deal is denied, Charter may not complete its deal to buy privately held Bright House. It's also likely that any denial of this acquisition, coming in the wake of the FCC denying Comcast's attempt to buy TWC, would make it clear that the federal agency is against major consolidation. Were that to happen, Time Warner Cable might have to remain its own company, and it might be an attractive partner for Altice.

A denial of the Charter/TWC could ultimately benefit Cablevision, or it could hurt it, but in the short term, it may send its stock down in anticipation of its acquisition being denied as well.

The deal could be denied
Altice and Cablevision are not only facing federal regulators, they must also deal with New York state and city, two governments often eager to assert authority. New York City Mayor Bill de Blasio has already said he intends to investigate whether Altice can complete the deal without lessening service to Cablevision's three million-plus customers.

"Altice is talking about $900 million in synergies. Well, what's getting cut? How's that going to impact the economy of New York and quality of services?" the mayor's tops legal counsel Maya Wiley told the Journal. "We certainly are not afraid to disapprove a transaction."

Even though its unclear as to whether New York City has the legal authority to stop the deal, it clearly has enough power to be a big thorn in the side of Altice. Federal or even state regulators can most certainly kill the transaction, and that would be bad news for Cablevision shareholders. It would leave them owning stock in a debt-laden company with limited options depending upon whether Charter/TWC was approved or denied.

An outright no from regulators might be the least likely scenario, but it would also cause the most damage to the company's stock price.