Utilities are learning how to fight rooftop solar, and that's bad news for SolarCity Corp.

When the solar investment tax credit (ITC) extension passed in December, it was expected to be a boon for solar installers like SolarCity Corp (SCTY.DL), Vivint Solar Inc (VSLR), and Sunrun Inc (RUN 1.63%). The subsidy helps pay for solar installations, so it's obvious that an extension will keep the industry growing, right?

How SolarCity drives value for customers
The growth of SolarCity, Vivint Solar, and Sunrun hasn't been driven by homeowners having some altruistic desire to get clean energy; that growth is driven by saving customers money. And it's those cost savings utilities are trying to eat away across the country.

One way utilities are trying to make solar less attractive is by adding fixed, or minimum, charges to customers' bills. They argue that a fee just to use the grid is justified, especially for customers sending electricity to the grid under net metering. Below, I've laid out how an old bill might look with just a usage charge, and what a new bill might look like with a fixed charge. Notice the bills have the same final cost to the customer.

This really begins to matter when you start to look at how residential solar companies price their systems. SolarCity, for example, says the average customer pays about $0.13 per kWh for electricity with no money down. If your electricity bill is already below $0.13 per kWh, there's really no point in moving to solar because there's no savings. If your cost per kWh is less than $0.13, rooftop solar is a non-starter.

Keep in mind that customers typically need to see significant savings to sign a 20-year contract. SolarCity says its average customer saves $408 per year, or 18% of their old electricity cost, in the first year they install a system.

SolarCity outlined how important these cost cutoffs are in the chart below. You can see that below $0.16 per kWh, each penny you can drop your price by opens up millions of potential new customers. 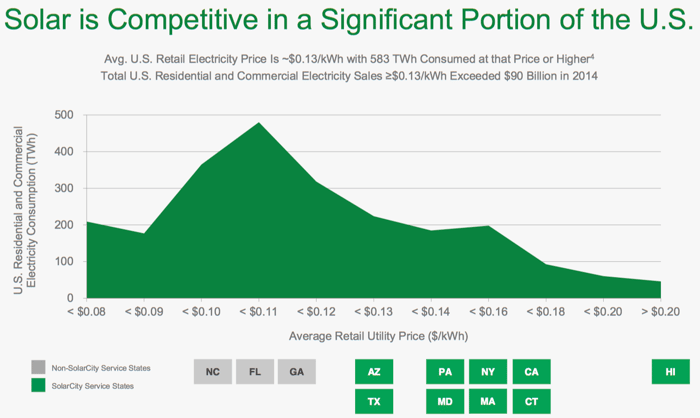 Utilities see this chart in the opposite way. If they can lower charges per kWh and increase fixed fees, they'll be able to make rooftop solar less competitive across the country.

Net metering will be SolarCity's biggest battle yet
Today, net metering is the standard policy in most of the Continental U.S., but that's changing. Arizona and Nevada have added fees that make solar less economical, and other utilities are expected to follow suit.

As utilities add fees, it makes solar less economical for new customers, but it's how it affects old customers that may have the biggest impact on residential solar installers. As usual, the devil is in the details.

This would be a punishment for existing customers that could come back at residential solar companies. After all, why keep paying a solar bill if it no longer saves you money?

More risk than you may realize
Residential solar companies present themselves as low-risk companies with long-term contracts, but they may not be as safe as they appear. The savings they provide to customers are built on energy policies that are under attack and won't likely last for long. Even California is building its plan for Net Energy Metering 2.0, which won't be as friendly to solar companies as NEM 1.0 was -- something investors will want to consider before going all-in on rooftop solar.