Unnamed sources say the drug company is selling some or all of its assets.

What: The Medicines Company (MDCO) ended the day up 14.5% after Bloomberg reported that the drug company is exploring selling itself.

So what: Investors don't seem to know what to do with the information. The stock spiked on the news and then nearly fell back to where it started the day, only to shoot back up again, albeit slower than the morning action. 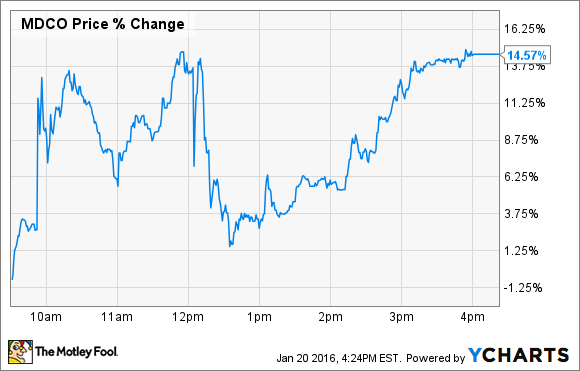 The biotech indexes started to rally around the same time, so the afternoon increase could have little to do with the potential buyout; in this market, drug companies are trading more on how investors feel about the sector as a whole than on the prospects of the individual companies.

Now what: We already knew that The Medicines Company's management is considering narrowing its focus, potentially selling assets or spinning them out into a new company. On its last earnings conference call in November, management gave a timeframe of six months to 18 months for a spinout, but noted that it could sell off its three approved hemostatic agents as well as some non-core products before then. It seems likely these reported rumors are linked to these potential sales.

On that same call, Fredric Eshelman, the company's non-executive chairman said, "The company's board of directors believes that our shares currently trade at a significant discount to the company's intrinsic value." Given that shares are lower than where they were for most of November, it seems unlikely we'll see a full sale unless the company gets an offer with an outrageous premium.

There are plenty of cases where the sum of two individual companies has resulted in higher valuations than the whole company could muster -- typically because they attract different investors -- but there are no guarantees. Buying The Medicines Company at this point is an act of faith in the ability of the drugmaker's management to extract value out of the company's assets.

Brian Orelli and The Motley Fool have no position in any of the stocks mentioned. Try any of our Foolish newsletter services free for 30 days. We Fools may not all hold the same opinions, but we all believe that considering a diverse range of insights makes us better investors. The Motley Fool has a disclosure policy.