What: With the price of oil surging more than 5% today as of 4:00 p.m. ET, stocks of oil and gas producers went through the roof. The ones with the largest gains also happen to be the small handful of companies that seem to move up and down by 10% on a daily basis. Here is a quick look at a small handful of companies that moved more than 10% on oil prices and some other announcements today.

So what: The obvious thing that is sending shares of these companies so high today is that big move in oil prices. With oil this low, it doesn't take a big nominal change for oil to move 5%. All of the companies mentioned here are also in rough shape with low oil, either because they have high debt loads, their production portfolios are reliant on much higher oil prices, or potentially both.

The two companies that moved big time today but probably shouldn't have are Ultra Petroleum and Range Resources. While they may get lifted by enthusiasm for oil prices, very little of these two companies' profits comes from oil. At their core, they are both natural gas producers, and today, we barely saw gas prices move. At around $2.00 per thousand cubic feet, profits will still be very hard to come by for Ultra and Range, even though the two companies are some of the lowest-cost producers out there.

On top of today's favorable oil price movement, both Noble Energy and Carizo Oil & Gas received analyst upgrades. Carizo was upgraded to buy by analysts at KLR Group, citing more favorable production from its Eagle Ford position even in today's low price environment. Noble was also upgraded to buy by analysts at Nomura that cited the company's natural gas production in Israel that has a fixed price as well as its stronger financials, which suggest it is going to be one of the companies to make it out of this downturn in decent shape. Granted, analysts have been a little late to the game when it comes to upgrading and downgrading oil and gas companies as of late, so longer-term investors shouldn't read into it too much.

Denbury Resources announced that it had let its offering for a debt swap expire. The swap was to exchange subordinated notes to senior notes that would have given the company more flexibility under its existing debt covenants, but even after giving a higher interest premium, the company couldn't get enough appetite for the swap. You can read into this in two ways: Either its bad news that Denbury couldn't get out from under its debt covenants because investors didn't want to lose their place in line to get paid if the company were to go bankrupt, or it's a blessing in disguise because those debts aren't due until 2021 at the earliest, and leaving them in place means lower interest rates.

Concho Resources probably had the best day of them all, though. The company was able to execute an asset swap where it was able to pick up more core acreage in the Delaware Basin -- part of the Permain Basin -- without having to shell out a whole lot in additional cash. The one thing that makes today's announcement a little muted is that the deal isn't expected to have any impact on the company's current production or plans for 2016, so this looks to be a small bet for further down the road.

Now what: In the grand scheme of things, these movements don't mean much. Even though today's gains look big, all of these companies are still down big time from back when oil prices were in around $100 per barrel. 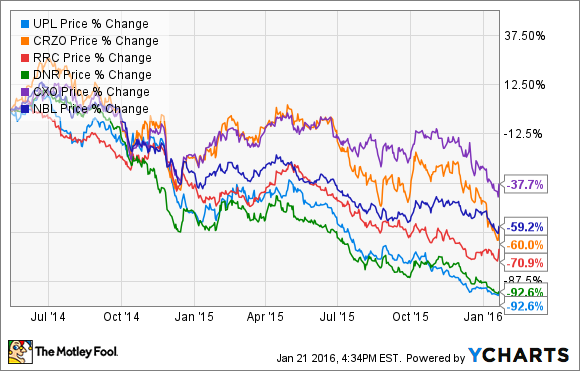 Chances are, these companies are all going to move by large percentages almost every day as the market remains rather volatile, and if you're invested in these companies, you're probably better off sticking your head in the sand and waiting until there is some real news to report before making any significant changes to your investing thesis.

The Motley Fool owns shares of Denbury Resources. The Motley Fool recommends Ultra Petroleum. Try any of our Foolish newsletter services free for 30 days. We Fools may not all hold the same opinions, but we all believe that considering a diverse range of insights makes us better investors. The Motley Fool has a disclosure policy.