Commercial cloud, Windows 10, and Surface could be the focus of the Windows-maker's earnings release.

Microsoft (MSFT 1.70%) will report its fiscal second quarter results on Thursday, January 28. Analysts expect the Redmond tech giant to have earned about $0.71 per share on revenue of around $25.3 billion -- both figures would be roughly flat from the same quarter last year. 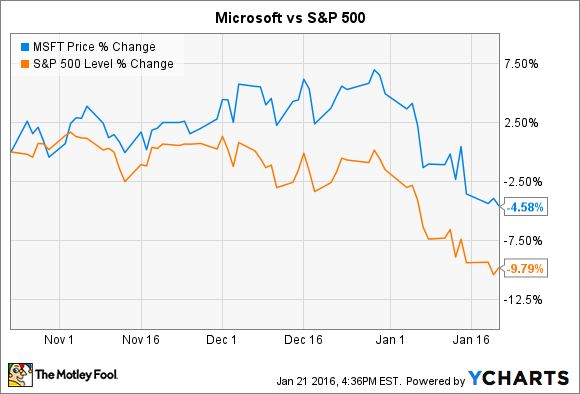 Shares of the Windows-maker have fallen about 4% since the company last reported earnings in October, but they have outperformed the broader market over that same period of time (the S&P 500 has slipped nearly 10%). Will Microsoft's earnings help it maintain that over-performance or send shares tumbling? It's impossible to say for sure, but here are three things Microsoft investors should pay close attention to when the company turns in its earnings report.

Closing in on $20 billion?
Historically, Microsoft's success has been driven by its software -- the sale of Windows and Office licenses dominated Microsoft's financials for much of its history. But in a mobile-first, cloud-first world (a phrase CEO Satya Nadella is particularly fond of), Microsoft is increasingly dependent on its cloud services, especially those aimed at enterprise customers.

Last quarter, Microsoft's cloud revenue run rate came in at $8.2 billion, up from $8 billion the quarter before. Investors should expect additional gains this quarter, as management's expectations remain considerably higher. Microsoft hopes to hit $20 billion by its fiscal year 2018, six quarters from now. Any slowdown or sign of sluggishness could shake investor confidence.

More than 200 million
Earlier this month, Microsoft announced that Windows 10, its latest operating system, was now running on more than 200 million machines. Look for Microsoft to give more updates on the strength and speed of Windows 10 adoption, and its expectations for the broader PC market. According to research firm Gartner, PC shipments slumped 8.3% in the fourth quarter last year, which could translate into lower Windows-related revenue.

Microsoft is looking to monetize Windows through means other than direct payments. Windows 10 includes deep integration with Microsoft's search engine, Bing. Last quarter, Bing achieved profitability for the first time. Microsoft has said it expects Bing's financial trajectory to continue improving in the coming quarters. While it remains a small part of Microsoft's business, any updates around Bing in the context of Windows 10's increasingly popularity could be interesting.

Microsoft's hardware isn't a major part of its business -- at least not yet -- but it's too big for investors to ignore. In 2014, Microsoft's quarterly Surface revenue broke above $1 billion for the first time. And there's been some evidence that demand for Surface products is growing: according to a report from 1010data released in December, U.S. online shoppers spent more on Surfaces than they did on iPads during the month of October. It won't be the most crucial part of Microsoft's earnings release, but investors should watch for updates on the Surface business.