U.S. stocks have now recouped all of their losses from the first part of the week, with the Dow Jones Industrial Average (DJINDICES:^DJI) and the S&P 500 (SNPINDEX:^GSPC) up 0.98% and 1.69%, respectively, at 1:15 p.m. EST. For net buyers of stocks (such as yourself, presumably), that is, of course, bad news.

This month's stock market volatility, which has produced one of the worst starts to the year on record, has rattled investors. You don't have to look very hard for evidence that market participants, professional and retail, are confused (and if you aren't confused, you haven't been paying attention, as the old saw goes).

Here are just two headlines from the front page of Yahoo! Finance this morning:

Global recession is NOT in the forecast: J.P. Morgan

Why oil and stocks are trading in lockstep

Are J.P. Morgan's analysts smarter than those at Bank of America Merrill Lynch? Do they have access to information that the others don't? The answer to both questions is no. All of Wall Street's economists, strategists, and analysts went to the very same schools, made the same grades, speak to the same people, etc.

What is unspoken (except by iconoclasts such as Nassim Taleb), is that these highly paid knowledge workers are putting a lot of time and effort into putting a veneer of certainty on topics that are unknowable, such as whether the U.S. will enter into recession this year.

But there is a second, more important point regarding these topics: They don't much matter to an intelligent investor's results. What do I mean by an "intelligent" investor? One who understands that stocks are simply highly liquid fractional interests in businesses and, crucially, whose behavior is consistent with that knowledge.

Or, as billionaire investor Warren Buffett pointed out in Fortune magazine in Dec. 2001:

To refer to a personal taste of mine, I'm going to buy hamburgers the rest of my life. When hamburgers go down in price, we sing the "Hallelujah Chorus" in the Buffett household. When hamburgers go up in price, we weep. For most people, it's the same with everything in life they will be buying -- except stocks. When stocks go down and you can get more for your money, people don't like them anymore.

As Buffett's comparison suggests, most investors' attitudes don't make a lot of sense. Here's a graphic illustration, using a two-year chart of the S&P 500: 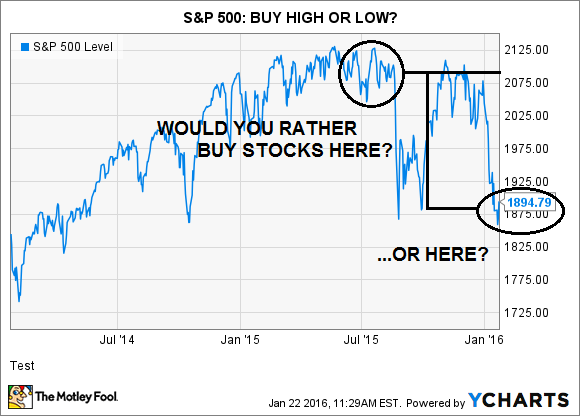 Instead of focusing on questions one can't possibly answer ("Will we have a recession?"), stock-pickers in particular ought to focus on questions that are knowable and within their circle of competence:

This month's price action has produced quite a few situations where the answer to that question is a resounding "yes." Yesterday, this column highlighted Bank of America, but there are plenty of others: Another high-quality banking institution, Banco Santander, trades at similar multiples as B of A. Shares of Warren Buffett's own Berkshire Hathaway look mighty attractive at a mere 26% premium to their book value.

Other market participants may be confused or concerned right now, but intelligent, business-focused investors know it's a time to rejoice...and ramp up your buying.