Shares of Bank of America Corp., Mastercard Inc., USG Corporation, and even Berkshire Hathaway Inc. should be on the Oracle's list this year.

Why's Buffett smiling? Because he's sitting on billions of dollars in a buyer's market.

Warren Buffett has spoken about being greedy when others are fearful. If he really believes that, then he must be licking his chops right now, with the U.S. stock market in complete "sell" mode to start 2016, and Berkshire Hathaway (BRK.B -0.70%) (BRK.A -0.68%) sitting on more than $60 billion in cash through the end of last quarter.

So what stocks should Buffett buy? Here are three that could be perfect candidates for Buffett to bag with his $60 billion elephant gun.

Riding a huge global trend
One of Buffett's best-known investing successes is American Express, but Berkshire also holds a small stake in Mastercard (MA 0.05%). Not only does Mastercard have an enviable position as the No. 2 credit card processing giant behind Visa, but there is an enormous opportunity for growth ahead.

Mastercard has a huge market share already, but the electronic payments business is still very much a growth industry. Credit and debit cards may seem commonplace, but even in developed markets, cash and checks still make up well over half of all transactions. Move outside of developed nations, and more than 90% of payments are cash-based. Added together, only 15% of global transactions are electronic in nature.

This goes beyond credit cards. While most people know Mastercard for its namesake credit card, it's important to understand that those cards are issued by bank partners that actually lend the credit. Mastercard's real business is its payment network, facilitating the transaction and payment to merchants in a secure and timely manner. This includes debit, pre-paid, mobile payment apps -- basically every type of electronic transaction you can think of. In other words, Mastercard is the facilitator of electronic commerce of all types, not just a name on a credit card.

Throw in a billion-person expansion of the global middle class over the next 15 years and now's a great time for Buffett to go big on another leader in electronic payments.

Back to his value roots
Buffett hasn't been a die-hard value investor in decades, but Bank of America Corp. (BAC -0.43%) has to stir his soul at this point. Since the financial crisis, the megabank has spent hundreds of billions on litigation and loan losses related to the housing crisis, and is only just now moving beyond that part of its past.

The bank just reported its full 2015 financial results recently, and earnings for the year were the highest they have been in nearly a decade. At the same time, there is every reason to expect those earnings to continue to grow, as it shakes off the vestiges of its past legal challenges and the losses from its Countrywide Mortgage acquisition at the start of the housing crisis. 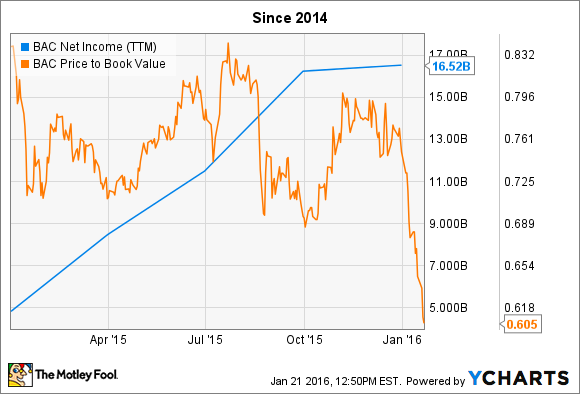 Bank of America is one of the cheapest big-bank stocks you can buy, with a price to book value multiple barely over 0.6, a significant discount to its value, and well below the multiple of most of its peers.

Sure, Berkshire already holds a $5 billion investment in Bank of America warrants -- which are valued at nearly triple that today -- but the value and profit growth opportunity is almost too good to pass up at this point.

Buy more Berkshire
Buffett has been reticent in the past to buy back shares of Berkshire itself, largely because he's historically been able to find better long-term uses for cash than the one-time benefit of reducing the share count. However, that could change this year, especially if the market continues to fall. In his 2012 letter to shareholders, Buffett wrote the following:

We originally said we would not pay more than 110% of book value, but that proved unrealistic. Therefore, we increased the limit to 120% in December when a large block became available at about 116% of book value. 19 But never forget: In repurchase decisions, price is all-important. Value is destroyed when purchases are made above intrinsic value. The directors and I believe that continuing shareholders are benefited in a meaningful way by purchases up to our 120% limit.

As of this writing, Berkshire's shares trade at around 124% of book value, knocking on Buffett's price limit where shares start to look attractive for repurchase.

Looking ahead: Expect the unexpected
Buffett has continued to show himself to be disciplined and focused on the very long term, even as he approaches his ninth decade of life, so rest assured that whatever he does with Berkshire's massive pile of cash, it will add value to the company for years to come. And it's probably not going to be any of the stocks above -- unless Uncle Warren happens to get his best ideas from me (he doesn't).

Nonetheless, now is starting to look like a great time to be a long-term investor with money to burn. The market may be down 10% to start 2016, but if you're a buyer right now with years ahead of you to invest, the bargain bins are starting to fill up. Channel your inner Oracle of Omaha and find some long-term winners for your own portfolio.