Please ensure Javascript is enabled for purposes of website accessibility
Log In Help Join The Motley Fool
Free Article Join Over 1 Million Premium Members And Get More In-Depth Stock Guidance and Research
By Dan Caplinger - Jan 22, 2016 at 11:02AM

The consulting giant has climbed steadily, and consistently treated its shareholders well on the income front.

Emerging from its roots as a unit of accounting giant Arthur Andersen, Accenture (ACN -0.17%) has become one of the world's preeminent independent consulting firms. With a focus on technology, Accenture has helped numerous businesses streamline their tech operations, going up against IBM (IBM -1.14%) and other giants of the tech industry to do so.

Along the way, dividends have been an essential component of the company's long-term success; Accenture weathered the financial crisis without a dividend cut, and kept its payout levels climbing. But can it keep its dividend moving in the right direction in 2016?

Putting an accent on dividend growth
Accenture's growth has been reflected in its share price, but the consultant has kept its dividends rising along the way as well. From 2005 to 2009, the company paid a single annual dividend, and it increased its payment by 150% over that time frame. In 2010, Accenture moved to a semi-annual dividend schedule, and payouts have nearly tripled in the five years since.

One thing to note, though, is that Accenture's pace of dividend increases has slowed along the way. During the late 2000s, boosts of 17% to 50% were typical, and even after the financial crisis, the company made one 50% hike and several 20% increases. Yet over the past two years, boosts of just 10% and 8% marked a slowdown in the progress that Accenture has made. 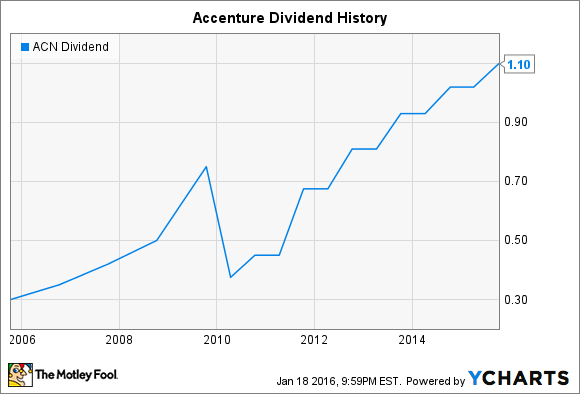 ACN Dividend data by YCharts. Note: Chart misleadingly represents the shift from annual to semi-annual payment frequency as a decline.

Some of Accenture's troubles can be traced to the fact that it does much of its business overseas, so the strength of the U.S. dollar has held back its growth in dollar terms. For instance, in its most recent quarter, Accenture's net revenue rose just 1.5%. But in local-currency terms, its top line improved by 10%. Executives at the company have been pleased with the progress that Accenture is making in taking better advantage of opportunities in the IT consulting arena, and strong growth in North America and Europe have many excited about the company's future.

Will Accenture accent dividend growth in 2016?
In particular, Accenture has joined IBM and other big players in the IT industry in focusing on cloud computing, data analytics, and cybersecurity as key high-growth markets. Such a major strategic shift inevitably comes with disruptions, but Accenture has done a better job than IBM at keeping its sales from falling during its transition.

Nevertheless, Accenture needs to be aware of increasing competition in the industry. A wide range of companies that used to specialize in the hardware end of the business have realized that they can boost their profit margins by offering consulting services as well. If they can cut out Accenture as an intermediary, then they can collect more profits for themselves. Accenture will have to work hard to counter that trend and demonstrate the value of its independent services.

The key to Accenture's dividend future likely rests with the fate of the foreign currency markets. If the U.S. dollar remains strong -- which Accenture believes is likely throughout 2016 -- then the consulting giant will likely show restraint, making only a modest increase to its semi-annual dividend in the second half of the year. On the other hand, if the dollar finally starts to flatten out,  it could pave the way for more aggressive dividend boosts in the double-digit percentage range. That might finally satisfy shareholders who've had to endure slowing dividend growth.

Dan Caplinger has no position in any stocks mentioned. The Motley Fool recommends Accenture. Try any of our Foolish newsletter services free for 30 days. We Fools may not all hold the same opinions, but we all believe that considering a diverse range of insights makes us better investors. The Motley Fool has a disclosure policy.