Please ensure Javascript is enabled for purposes of website accessibility
Log In Help Join The Motley Fool
Free Article Join Over 1 Million Premium Members And Get More In-Depth Stock Guidance and Research
By Travis Hoium – Jan 23, 2016 at 10:40AM

The battle between David Tepper and SunEdison could spell disaster for the renewable energy company.

Shares of SunEdison Inc (SUNEQ) have been through a whirlwind in the past six months and the turbulence for shares is likely far from over. Last summer, investors thought this was the next great renewable energy stock and now investors (including myself) are wondering if the company can stay in business much longer. At the center of the debate is a billionaire investor who could sink the company by the time the winter snow melts. 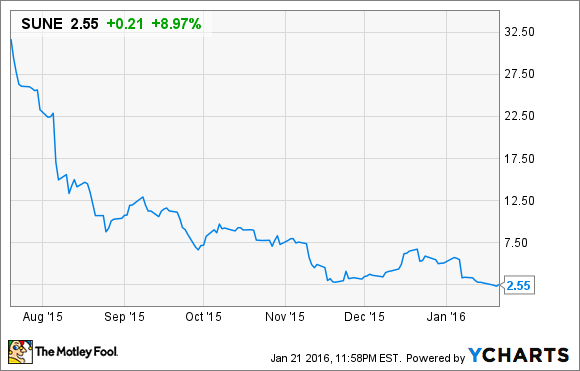 The billionaire ready to kill SunEdison
To understand SunEdison's troubles today, you have to understand some of SunEdison's history. The company was once known as MEMC Electronic Materials, a maker of silicon materials that went into solar panels, before buying SunEdison. In 2013, under the watchful eye of hedge fund Altai Capital Management,  the company changed its name to SunEdison  and began focusing on renewable energy project development. It spun off the semiconductor business and launched yieldcos TerraForm Power (TERP) and TerraForm Global, who were central to that strategy as a low cost place to deposit billions in renewable energy assets. Despite massive losses, the market loved the strategy and shares soared until mid-2015.

Problems arose last summer when SunEdison agreed to buy Vivint Solar and sell most of the operating assets to TerraForm Power. After the deal was announced TerraForm Power's share plunged, meaning if new shares were issued to facilitate the purchase they would be issued at dividend yields above the cash yield generated from Vivint assets, and the entire model began to fall apart. From SunEdison's perspective, completing the acquisition was still worthwhile if it could dump assets on TerraForm Power, but the yieldco's investors didn't see the same benefit.

Investors began questioning why a yieldco built to own large wind and solar projects with long-term sales contracts to utilities would be buying riskier residential solar assets with relatively low return on investment (the original acquisition specified a 9.5% cash on cash yield, lower than TerraForm Power's current dividend yield of 16.2%). The most vocal critic was David Tepper of Appaloosa Management, who acquired about a 10% stake in TerraForm Power and started demanding answers to why an independent company would acquire residential solar assets for returns lower than its own stock's dividend yield.

SunEdison is stuck between a rock and a hard place
Tepper's latest move is a lawsuit aimed to block TerraForm Power's acquisition of Vivint Solar assets. If successful, it wouldn't block the Vivint Solar acquisition by SunEdison, but it could make financing it very difficult.

SunEdison has had to resort to asset sales  and debt exchanges of late and if TerraForm Power doesn't buy operating assets SunEdison would have to come up with the additional $799 million  needed to complete the transaction. SunEdison anticipated having $1.12 billion in cash on hand at the end of Q1 2016, so the deal could get done, but it would be a stretch. Without new financing, the acquisition could cause a credit crunch, something SunEdison doesn't need considering that the last time it raised debt it got a variable rate with a floor of 11% (above the cash yield of Vivint assets).

SunEdison's balance sheet is already a mess and acquiring Vivint Solar without the help of TerraForm Power would only make it worse. It could even lead to bankruptcy without asset sales and/or new financing.

Confidence is lost
As Tepper tries to get TerraForm Power out of the Vivint Solar deal, the architects of SunEdison's business model are fleeing the company. On January 14, COO Perez Gundin  left SunEdison and on January 19, Steven Tesoriere, Managing Principal at Altai Capital Management  and a key architect of the current SunEdison business model, resigned from the board  of directors. This follows multiple TerraForm Power board members resigning in November as well. It's hard to have confidence in a company whose leaders are jumping ship.

To sum up the situation at SunEdison; executives are fleeing, debt costs are rising, and a billionaire hedge fund manager is trying to block a transaction that would have made the Vivint Solar acquisition manageable.

I don't know where this ends, but none of the signs are good for SunEdison today. It will take a miracle for the company to get out from under its past mistakes and now the company is in court fighting against one of the most powerful men on Wall Street. That's far too many red flags for me to overlook.