It's fair to say that Starbucks (NASDAQ:SBUX) changed how Americans drink coffee.

Before the chain became ubiquitous, cappuccinos and lattes were reserved for fancy restaurants and the rare local coffeehouse. Espresso was not something most U.S. citizens drank regularly, and many who did mistakenly called it "expresso." Before Starbucks, we lived in a world where coffee was served up "light and sweet" in foam cups from Dunkin' Donuts or at convenience stores.

Now, Starbucks operates in all 50 states, and it has made drink words such as "Macchiato" and "Frappuccino" part of our national vocabulary. It has also changed coffee from something ordered quickly with some minor personalization into a nitpicky explosion of personal preference. No Dunkin' Donuts customer ever ordered a grande, soy, half-caf, Cinnamon Dolce Latte with extra foam, but that's a borderline simple order for a Starbucks customer.

The coffee chain with the green Siren logo has changed how we drink and has managed to introduce new products and advances into its cafe experience. But just because Starbucks tries something doesn't mean it works, and the company has had a number of well-hyped, heavily promoted, giant failures.

Stabucks has a big menu, which it changes often Source: author.

It's sort of like a melted candy bar
One of the big challenges where Starbucks has generally succeeded is having drinks that appeal to people who don't like coffee. This has gone well beyond offering tea and hot chocolate into fruit juices, smoothies, cream-based Frappuccinos, and lightly caffeinated fruity energy drinks. But while the chain has managed to appeal to non-coffee drinkers with this vast array of choices, one area where it failed was its attempt to introduce drinking chocolate in the United States.

While hot chocolate is chocolate blended with milk, drinking chocolate, which is popular in Europe, is just melted chocolate. Starbucks marketed its Chantico line of drinking chocolate by calling it a "a drinkable dessert," but the idea failed to catch on with American customers and it was quickly abandoned.

Coffee and cola?
While sometimes two tastes that seem like a bad idea to mix turn out to go great together (try maple ice cream and bacon), more often than not they don't. That didn't stop Starbucks from teaming with PepsiCo (NASDAQ:PEP)to launch Mazagran, a bottled product that was a carbonated cross between coffee and cola.

The product, which tested in the Los Angeles area in 1995, got a fair amount of attention, but one early customer pretty much summed up its life cycle. "It's bound to sell well because people want to try it," Helena Wichman told the Los Angeles Times, "but after they try it, I don't think they'll want to have it again."

That appears to be true, because the drink was scrapped very quickly in favor of a bottled version of the then-new Frappuccino, which had become an in-store hit that same year.

It's a sorbet you can drink
Before it launched its Refresher line of lightly caffeinated fruit-flavored drinks, Starbucks tried another take on fruity -- its Sorbetto line. The line, which required a special machine to make it, never made it past a brief test on the West Coast. The line included two flavors --"tangy sorbetto," a twist on Pinkberry yogurt, and "citrus ice sorbetto," which Huffington Post described as "grapefruit tart, yet still plenty sweet."

The company had hoped that the slushy treat would be a fruity complement to its Frappuccino, but that did not come to be.

Customers say no to Vivanno
In 2008 Starbucks had yet another "next new thing" that it hoped would become a major feature on its menu. Called Vivanno, it was a line of smoothies, which contained a whole banana, while giving drinkers 16 grams of protein and 5 grams of fiber with 270 calories or less and no artificial colors, artificial sweeteners, or high-fructose corn syrup in a 16-ounce serving. That's how the company put it in a press release.

"Our customers have told us they're looking for overall well-being in their lives, and healthier options are part of that. We feel the simple, transparent ingredient list and the functional nutrition of Vivanno meet this need," said Katie Thomson, a registered dietitian and Starbucks' senior nutritionist, at the time.

Vivanno seemed like a good idea, but while the drinks were marketed very heavily in the chain's stores with extensive sampling, they never connected with consumers. Having a healthy(ish) meal-replacement option should have been a winner -- a way to compete with smoothie and frozen-yogurt shops -- but instead of becoming a brand like Frappuccino, Vivanno was quietly dropped.

Oddly, Starbucks still sells the smoothies -- they simply no longer have any branding. That's a better fate than the three previous products on this list, but Vivanno was still a huge failure given the new markets that the beverage line could have opened up for the chain.

Failures yet to come
The key thing linking all of these flops is that they were attempts by Starbucks to create a new category for its stores. That's clearly a major challenge that's much harder than launching a new seasonal beverage. 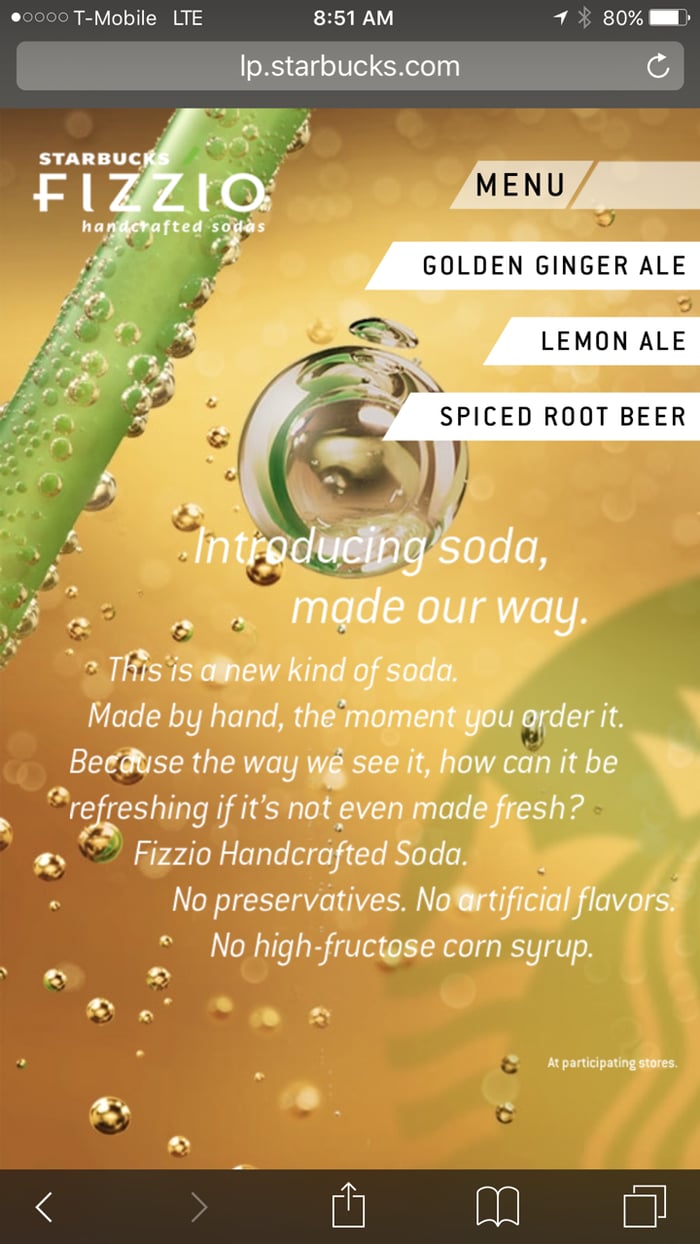 Right now, the company has two product lines that both seem to be faltering: its Refreshers, which are made with are made with real fruit juice and are lightly caffeinated with green coffee extract, and the Fizzio soda line, which are carbonated drinks made fresh. Both still exist, but neither has been a breakout hit.

Of the two, Fizzio looks to be in greater danger, as its national rollout was never finished, and some of the stores that had previously featured it still sell it, but no longer list it on menu boards.

Refreshers are also being minimized on the company's newest menu at some locations, with only one listed, but the canned version of the drink shows up in a variety of flavors in the chain's packaged beverage and food coolers. The line also has featured placements in many grocery stores by the checkouts, so it seems like a better long-term bet for survival than Fizzio.

The sodas, which are less sweet than you would expect, do fill a need on the Starbucks menu. They're a nice, relatively low-calorie treat for non-coffee fans or people who have already had their fill of caffeine for the day.

But as we have learned with all of these lines, just because a product makes sense and feels like it should work doesn't mean Starbucks customers will embrace it. Creating the next Frappuccino would materially affect the company's bottom line, especially if it was a product that increased traffic to stores in the late afternoon or evening. That, however, is a huge challenge, and the company is likely to create a lot more Sorbettos and Vivannos before it finds its next hit.