Please ensure Javascript is enabled for purposes of website accessibility
Log In Help Join The Motley Fool
Free Article Join Over 1 Million Premium Members And Get More In-Depth Stock Guidance and Research
By Tim Beyers - Jan 23, 2016 at 9:17AM

The stock has been a proven winner for many years. Here are three things that could derail it in 2016.

Salesforce.com has been drawing developers and customers in increasing numbers. Can the momentum continue in 2016? Image source: Salesforce.

Few stocks have have ever defied doubters as well -- or as consistently -- as Salesforce.com (CRM 3.50%). A six-bagger over the past decade, Salesforce has become the poster company for cloud computing while multiplying revenue from just $176.4 million in fiscal 2005 to $5,373.6 million last year, a 30-fold increase, according to S&P Capital IQ.

Yet this growth story is far from over. CEO Marc Benioff is dead-set on getting to $10 billion faster than any other company in the history of the enterprise software market -- an industry that includes names such as Microsoft and Oracle, among others.

He's making plenty of progress. As the chart below shows, both revenue and cash from operations have improved steadily over the trailing 12 months, leading the stock up more than 20% over the same period. The S&P 500 is off more than 7% in that time. 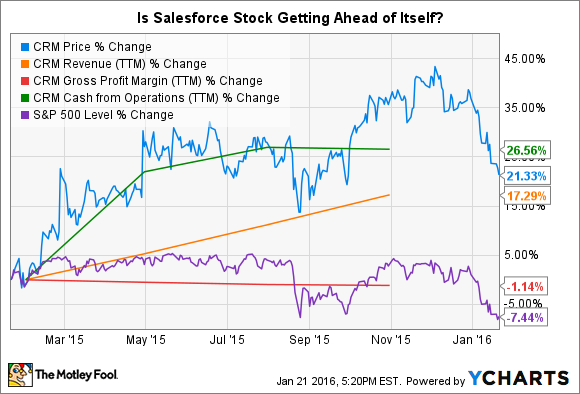 The open question is whether the rally can continue. History says yes: Salesforce has topped analysts' consensus revenue estimates in each of the past four quarters, S&P Capital IQ reports. The company also exceeded profit targets in three of those four periods, usually by $0.02 per share.

With that in mind, it's tough to see how anyone would presume Salesforce will disappoint investors in 2016. But if it happens, it'll because of one of these three dreadful outcomes came to be:

Now it's your turn to weigh in. Do you see Salesforce winning or losing in 2016? What other potential gotchas could snare investors? Keep the conversation going in the comments section below.