If you've ever seen the documentary Food, then you know the kind of power Monsanto (NYSE:MON) has in the agricultural industry. You probably also know that It's not the most beloved company in the world.

So, despite its size and influence, things look uncertain for Monsanto. There was the failed merger with Syngenta, which saw Monsanto throw in the towel after Sygenta rejected a sweetened offer in late 2015. Then there's the report of lower revenue and net income in Q1 2016 versus the same period a year prior. These difficulties are just the tip of the iceberg, and Monsanto's stock is down 22% over the past 12 months. Which of course begs the question, is there a margin of safety at current levels? Let's take a closer look.

The near term
Monsanto is in the middle of a restructuring plan that calls for the reduction of 2,600 jobs and the closure of its Brazilian sugarcane operations over the next two years. The sugarcane closure is meant to focus the company on its core competencies in seed and crop protection products, and the restructuring is intended to help optimize the business and generate substantial cash flow in the coming years.

Aided by its restructuring efforts, MON continues to return a generous amount of capital back to shareholders and is still at the forefront of innovation in its space. The company continues to invest in its business, and its leading innovation in the sector represents a major component in its success for the long term. Regardless of the recent uncertainty surrounding the company, it has wide-ranging R&D resources and priceless mountains of data that give them a tremendous advantage over the competition in developing next-generation products.

Farming in the 21st Century
Monsanto has been at the forefront of genetically modified seeds since 1982. The company helps farmers improve productivity and reduces expenses with its herbicides, biotechnology traits, and precision agriculture. The company operates through two segments: Seeds & Genomics, which produces genetically and naturally modified crops and vegetable seeds; and Agricultural Productivity, which consists of branded herbicide Roundup. The Seeds & Genomics segment will be the driver of future growth, as the Agricultural Productivity segment has come under pressure of late because of competition and an increase of supply on the market. The increased competition is expected to weigh on earnings and margins.

However, Monsanto's extensive patent portfolio, specifically the crop- and function-specific trait patents, gives the company a strong competitive advantage. The company has done very well in the past by having customers go through an upgrade cycle to new product versions with new patents before the old patents expire. 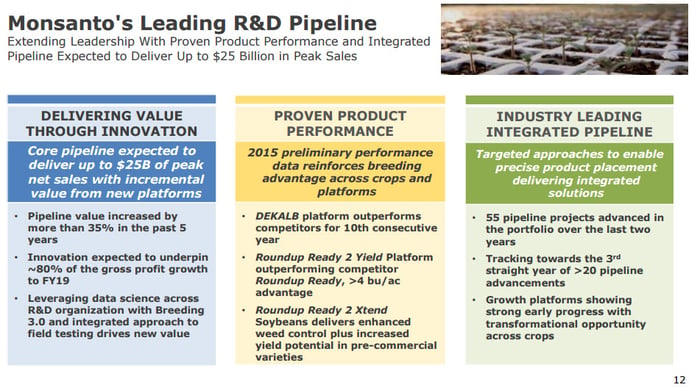 Labeling intellectual property as a sustainable competitive advantage is something that should be done with care. However, if Monsanto can continue to develop next-generation products through its extensive R&D budget  of $1.5 billion per year, that's an enormous competitive advantage that many competitors simply cannot replicate.

Depressed commodity environment and PR challenges
Recent commodity headwinds have forced the company to get more aggressive on the cost-cutting side of the ledger. Management expects forex volatility and a depressed commodity environment to drive down acres for growing crops. In response, the company is going to rein in operating spending, which is expected to save $500 million by 2018. 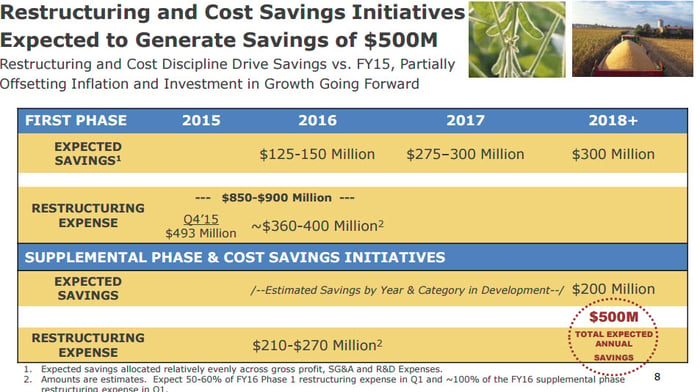 As I mentioned, Monsanto also has a less than stellar public reputation. Developed countries in the West have already begun to shun GMOs foods for organic options. That's something to be aware of, especially in terms of how attitudes will progress around the globe.

Also, the recent merger attempt of Monsanto's acquisition of rival Syngenta points to the difficulty of finding growth in the marketplace. The merger could still happen someday, but the fact that it was attempted could be a warning sign that the big players are having a hard time growing organically -- no pun intended. The merger would have created a dominant global player in the agricultural space, strengthening it to do battle with rivals DuPont (NYSE:DD), Dow Chemical (NYSE:DOW), BASF, and Bayer.

Long-term growth wave
Population and GDP growth around the globe position Monsanto well over the long term through increased food demand. Limited land and the decline in the number of farmers makes this an incredibly valuable company in feeding the world. Continued yield maximization is at the forefront of what it's trying to achieve through both research and development and its current products. Its patent-protected portfolio gives it a big leg up over the competition. 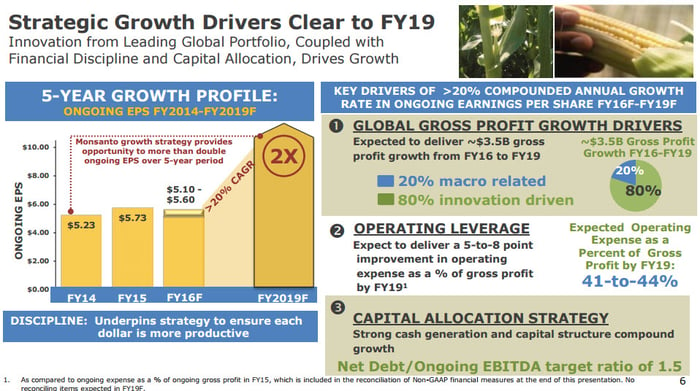 The company is positioned well for growth from strategic advancement and operational discipline. Growth from Seeds & Genomics is set to play a significant role in this growth strategy, as Monsanto expects to hit mid- to high-single-digit growth in gross profit from new corn hybrids globally, soybean penetration, and licensing opportunities. The growth initiatives, combined with a new $3 billion share repurchase program, should accelerate earnings growth to more than two times its current figure by 2019.

Management team
Monsanto has generated over $7 billion of free cash flow in the past four years. It's been able to accomplish this level of success through managing working capital at a highly disciplined level, by managing receivables and inventories within a similar percentage over the past three years. Its capex discipline has helped it focus on reinvesting on things that drive the growth of the business. 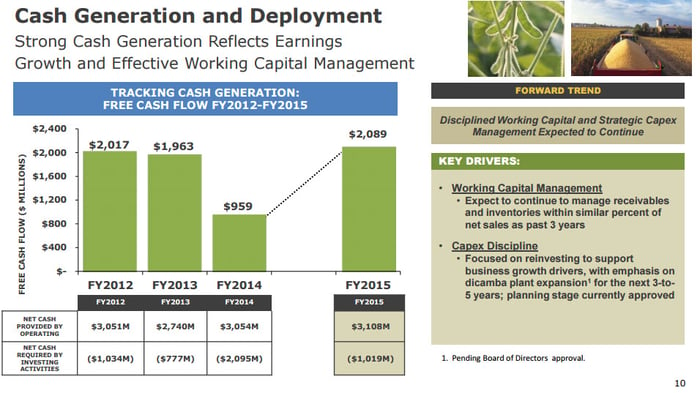 Management has been extremely shareholder friendly, having returned $11.6 billion to shareholders in the form of dividends ($2.6 billion) and share repurchases ($9 billion) since 2013. It recently completed a $6 billion buyback program and just initiated another $3 billion program. Overall, management has repurchased 15% of the shares outstanding since 2013. In addition, management has been able to generate returns on capital of over 22% the past three years, which shows its ability to allocate capital effectively. 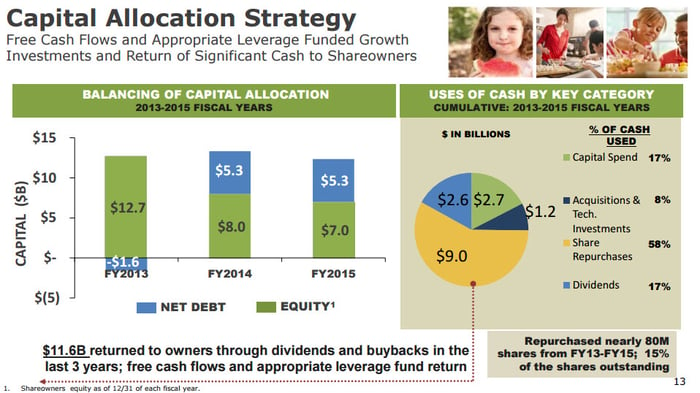 Bottom line
Monsanto has been at the forefront of genetically modified seeds since 1982. Competition appears to be increasing, as we can see with the recent merger attempt with Syngenta. Despite the constant litigation and scrutiny, the company continues to do well. It may not be well-loved, but all evidence suggests that Monsanto is a high-quality company in a consolidated industry, with good growth prospects and a strong competitive position. Shares may not look overly appealing right now, with an FCF yield of 5.27%, an EV/EBIT of 15.56, and a dividend yield of 2.3%. However, if the company can execute on its strategy of doubling earnings by 2019, shares at current levels could be a home run, and certainly worthy of consideration by Foolish investors.