Please ensure Javascript is enabled for purposes of website accessibility
Log In Help Join The Motley Fool
Free Article Join Over 1 Million Premium Members And Get More In-Depth Stock Guidance and Research
By Brian Feroldi, Daniel Miller, and Matthew DiLallo - Jan 24, 2016 at 10:03AM

Are you new to investing? Here's the advice that our contributors wish they had received when they first got started.

No one starts out as a master investor, as many Motley Fool contributors can attest. We were all investing novices at one point, and each one of us has made our fair share of dumb investing decisions over the years.

Knowing that, we asked our team of Motley Fool contributors to share one piece of advice that they wish someone would have told them before they invested their first dollar. Read below to see what they had to say.

Matt DiLallo: I really wish someone had shared with me Warren Buffett's mantra that "price is what you pay, value is what you get." If that happened, I might not have wasted my first investment on Sun Microsystems, which, at the time, was trading for around $5 per share. I chose that stock over the blue chip Procter & Gamble, which was my runner-up, because I could buy 10 shares instead of just one. I was focused on the price and not the value. I bought a cheap company -- not a great company.

During the next few years, Sun's value continued to erode, and I eventually sold it for much less than my initial investment. Meanwhile, P&G has delivered strong outperformance over the years: 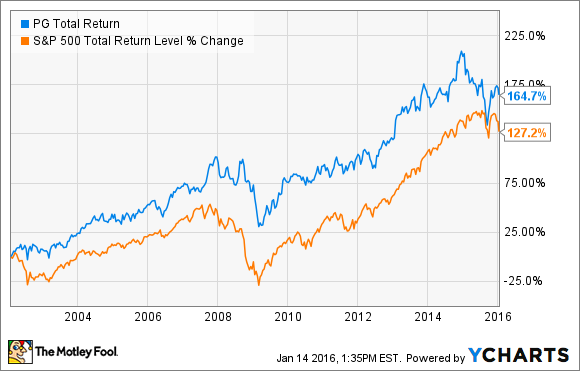 I thought that it would be much easier for a $5 stock to double than it would be for a $50 stock to do the same. That logic, however, hasn't proven to be true. In fact, most of my best investments have actually been stocks I bought at more than $100 a share. That's because these were often great companies that went on to continue to deliver great performance.

Given what I've learned over the years, my best advice to someone starting out is to look at the business first and the stock price second. Find a great business that's selling for a reasonable value, and buy it with the intention of holding it for a long time.

Brian Feroldi: When I first started out, I was in such a rush to get started that I largely skipped right past the research part of the investment process, and just dove in head first. How much cash did the company have? Were their products selling well (if they even had any)? Did their management team own any stock?

None of these pesky details mattered to me, so I didn't even attempt to look them up. Instead, I largely chased after hot penny stocks that were swirling around my inbox in the hopes I would strike it rich in a hurry.

As you can guess, this process lead me to have dreadful results, and I ended up losing a large amount of my initial capital. Thankfully, I was lucky that this happened to me when I was young, and didn't have a lot of money to lose. Still, at the time, it felt like I lost a lot.

Lesson learned -- if you're not willing to put the time in to research a company properly, than you shouldn't be investing in the first place. I wish someone had told me that before I had to learn it the hard way.

Nowadays, I spend a great deal of time researching a potential investment before I even consider adding it to my portfolio. For example, I've had my eye on Halozyme Therapeutics for several months now, but I haven't purchased shares yet as I'm wanting to see more clinical data on its PEGPH20 product candidate before I pull the trigger. The old me would have simply bought shares of Halozyme Therapeutics before I even knew that PEGPH20 was in its pipeline!

Daniel Miller: One thing I wish I had done would be to follow my own advice to not trade on margin.

Many of my friends ask me for investing tips, research, and advice. When I give advice to my friends, I always explain the right way to do things. I tell them the safe, smart, and long-term way to look at investing. I explain the benefits of diversification, of trading less frequently, and of keeping a portion of your portfolio in cash. I also teach them how to avoid falling knives and to avoid trading on margin.

Then I go home, satisfied that I delivered sound advice to my friends; and then I don't take my own advice.

Perhaps part of that is because I think I'm better than the average investor, and that those rules of thumb only apply to newer investors. Whatever the reason, had I followed my own advice, I would certainly have been in a much better position today, and sleeping more soundly at night. (Looking at you, plunging oil prices.)

For instance, one of my best investments was in Core Laboratories, which had more than doubled up for me by last summer. Then when oil prices plunged, and CLB, along with the entire market, felt the pain, I decided to use margin to load up on shares of CLB, despite advising friends and family to never try and catch a falling knife, and to never use margin in such a risky way.

I've learned many valuable lessons that I have no doubt will make me a great investor going forward. However, my New Year's resolutions are to create a real plan with financial goals, build up a cash position in my portfolio, and better diversify my investments. Most importantly, my last New Year's resolution is to follow my own advice, something that's years overdue, and something I wish someone had told me long ago.

Brian Feroldi has no position in any stocks mentioned. Daniel Miller and Matt DiLallo own shares of Core Laboratories, which the Motley Fool also owns shares of and recommends. The Motley Fool recommends Procter & Gamble. Try any of our Foolish newsletter services free for 30 days. We Fools may not all hold the same opinions, but we all believe that considering a diverse range of insights makes us better investors. The Motley Fool has a disclosure policy.