The online retail giant now has more clothing and accessory items available on its site than electronics. 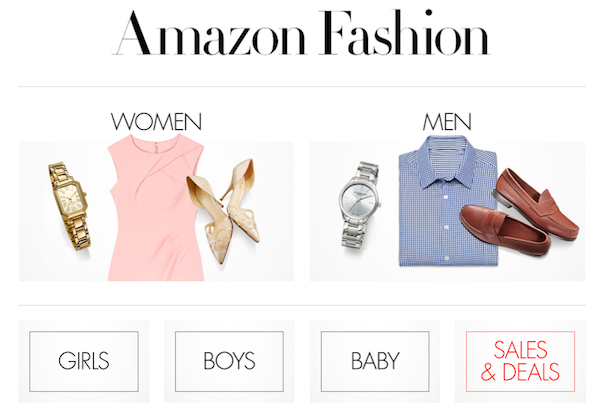 Amazon.com (AMZN 0.84%) has garnered lots of attention for things like its Prime Day event, Black Friday deals, and even its Internet of Things ambitions. But since 2012, the company has quietly been building its clothing empire -- and it's shaping up to be a huge one.

Just before the 2015 holiday season, Amazon had amassed a total of 30 million clothing and accessory items into its online store. If you're having hard time understanding if that's a lot or a little, consider that Amazon currently has more clothing and accessories options on its website than it has electronics -- and the site has a lot of electronics.

Amazon has increased its clothing and accessory offerings by an amazing 91% over the past 12 months, according to investment bank R.W. Baird. And it's not just the number of items offered that is increasing. Sales from Amazon's clothing segment are expected to propel the company to the top spot among apparel retailers, ahead of current leader Macy's (M 1.50%), as early as next year.

Can Amazon really pull this off?
Aside from adding tons of new items into its online store, Amazon has made a handful of major pushes over the past year to solidify Amazon Fashion's brand.

The company sponsored the men's New York Fashion Week over the summer in an effort to show the company is getting more serious about the industry.

Amazon also opened up a 46,000-square-foot photo studio in London last year. The building will allow the company to take about 500,000 clothing images each year -- a major upgrade from its initial approach of taking clothing photos at a distribution center in Kentucky years ago.

Amazon has said it's open to selling its own private-label clothes as well. The company's reasoning behind this is that some brands have chosen not to sell on its site, and it wants to fill in the gaps for its customers.

"When we see gaps, when certain brands have actually decided for their own reasons not to sell with us, our customer still wants a product like that," Jeff Yurcisin, Amazon Fashion's vice president of clothing, said at the WWD Apparel and Retail CEO Summit back in October.

While some fashion brands may have scoffed at the idea of selling on Amazon, their disdain may not last much longer. Amazon has already amassed 2,500 clothing labels on its site; soon, it'll be the go-to clothing destination.

According to research from Cowen and Company, Amazon is expected to control a 14% share of the U.S. clothing market by 2020, up from 5% last year, with sales expected to top $50 billion,, surpassing Macy's, TJ Maxx, Wal-Mart, and Nordstrom. Those numbers, mixed with Amazon's fashion focus, will likely convince many brand holdouts to embrace Amazon' vision of clothing sales.

I have to admit that Amazon isn't the first place I think of to buy my clothes (though I'm a big user of its Prime services), but apparently, that's not the norm for everyone. I believe the predictions that the company will take the top retail apparel spot away from Macy's are likely to come true, as Amazon has amassed a truly huge catalog of clothing options. It may be hard to for some people to image that consumers would want to buy most of their clothes from a website as opposed to a traditional brick-and-mortar store, but we've seen Amazon overcome that barrier before in books, electronics, and a host of other categories. Now it's the apparel industry's turn.

Chris Neiger has no position in any stocks mentioned. The Motley Fool owns shares of and recommends Amazon.com. The Motley Fool recommends Nordstrom. Try any of our Foolish newsletter services free for 30 days. We Fools may not all hold the same opinions, but we all believe that considering a diverse range of insights makes us better investors. The Motley Fool has a disclosure policy.