Please ensure Javascript is enabled for purposes of website accessibility
Log In Help Join The Motley Fool
Free Article Join Over 1 Million Premium Members And Get More In-Depth Stock Guidance and Research
By Travis Hoium - Jan 25, 2016 at 11:30AM

Growth in the solar industry may benefit two solar giants more than competitors.

The entire solar industry is overjoyed by the extension of the 30% solar investment tax credit (ITC) late in 2015. It keeps the industry's biggest subsidy in place and should drive growth for the foreseeable future.

But not all parts of the solar industry will benefit equally. Residential solar companies are in fierce competition between themselves and are now fighting utilities who are trying to undermine their growth. The bigger beneficiaries may be companies who build large solar farms and sell electricity directly to utilities.

Why utility scale solar is set to explode
The advantage utility scale solar companies have is that they're selling power directly to utilities, regulators are supporting these projects, and they're by far the cheapest way to generate electricity from the sun. These projects simply have less friction from the electric grid establishment than rooftop solar, which is more of a disruptive force to the utility business model (for better or worse).

Now that power purchase agreements between utilities and solar companies are below 5 cents per watt, solar is often the lowest cost option for new electricity, especially in the southern U.S. That should foster growth from 3.9 GW of utility scale solar installed in 2014 to around 10 GW in 2020, according to GTM Research. 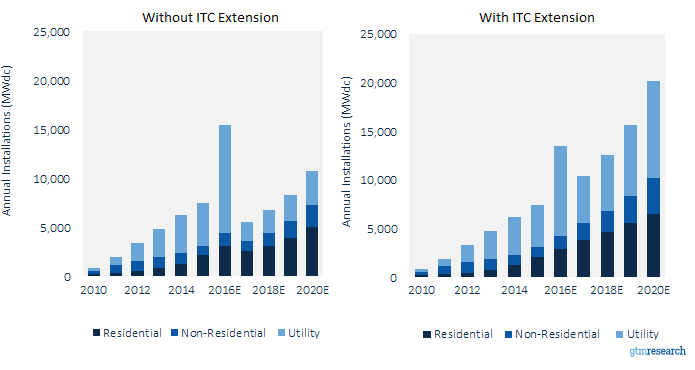 The winners from solar's growth
Today, the companies who make money in utility scale solar are vertically integrated, which helps squeeze out every penny of cost possible. First Solar (FSLR -0.59%) and SunPower (SPWR -1.85%) fit that bill and are expecting to enter a new growth phase with the ITC extension.

First Solar is expecting to increase production 20% in 2016 and is expecting revenue to grow around  $500 million to a range of $3.9-$4.1 billion. Management hasn't indicated how much it expects to grow beyond 2016 but with increased certainty in the U.S. I wouldn't be surprised if it plans to double production or more by 2020. 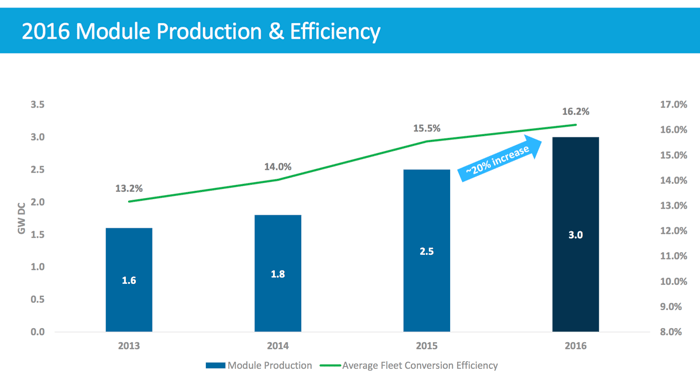 Beyond 2016, SunPower expects to expand production capacity to 4 GW by 2019, including a new line of products meant for higher cost of capital countries like India and South Africa.

The value in solar is incredible
When you think about First Solar and SunPower both potentially being able to double or even triple their size between 2015 and 2020 you might think that they are probably expensive stocks. But that's not the case.

While other solar companies have been grabbing headlines, First Solar and SunPower have been building businesses that have a competitive advantage in the very important utility scale solar industry. And with their stocks at great values they could be set up to explode in coming years.

Travis Hoium owns shares of First Solar and SunPower. The Motley Fool has no position in any of the stocks mentioned. Try any of our Foolish newsletter services free for 30 days. We Fools may not all hold the same opinions, but we all believe that considering a diverse range of insights makes us better investors. The Motley Fool has a disclosure policy.