Please ensure Javascript is enabled for purposes of website accessibility
Log In Help Join The Motley Fool
Free Article Join Over 1 Million Premium Members And Get More In-Depth Stock Guidance and Research
By Luke Neely - Jan 25, 2016 at 8:00AM

Shell's bid for BG Group has brought about skepticism from the market.

On April 8, 2015, Royal Dutch Shell (RDS.B) announced the terms of an agreement to buy BG Group for 383 pence in cash (or $5.51 per share) and 0.4454 Shell B Shares. If shareholders of both companies approve the deal when they vote on Jan. 28 and 29, the combined company will become the largest publicly traded LNG producers in the world, with more than double the reserves of ExxonMobil (XOM 1.98%). And it would catapult Shell into becoming the world's second-largest non-state oil company in the world from a market cap perspective, ahead of Chevron (CVX 1.64%).

Investors are at an interesting juncture right now since the oil and gas price collapse. Let's see how the deal makes sense.

The argument
Not everyone is convinced that the deal is a good idea, though. Oil prices have decreased 40% since the announcement, making investors increasingly worried that Shell may be paying too much. Shell will have to pay $18.94 billion in cash. The company has more than enough to cover the cost, with $45.21 billion in cash on its balance sheet. But BG Group's shares do appear overpriced at current levels, based on numerous traditional metrics. Shell's stock, in contrast, looks appealing at current levels, with a forward P/E of 8.07, a depressed P/FCF of 21.17, and a dividend yield that stands at 9.62%.

Cumming's apprehension is understandable. However, his rationale could be too short-term in nature for long-term investors and sustainability of the business long-term. The Shell-BG deal will ultimately be measured 10 to 30 years down the line. It's a strategic acquisition that will allow Shell to position itself in the growing LNG market and oilfields off Brazil. Despite the valuation questions, Shell can afford the deal and it positions themselves long-term. 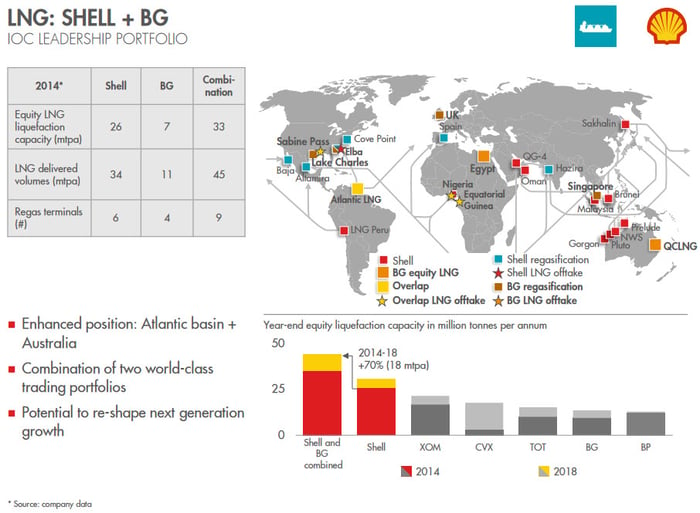 The acquisition would add 25% to Shell's proven oil and gas reserves and 20% to its production. "BG and Shell are a great fit," says Shell CEO Ben van Beurden. "This transaction fits with our strategy and our read on the industry landscape around us. BG will accelerate Shell's financial growth strategy, particularly in deep water and liquefied natural gas, two of Shell's growth priorities and areas where the company is already one of the industry leaders."

"Furthermore," he continued, "the addition of BG's competitive natural gas positions makes strategic sense, ahead of the long-term growth in demand we see for this cleaner-burning fuel. ... Over time, the combination will enhance our free cash flow potential, and our capacity to undertake share buybacks, where I expect to see a substantial increase in pace."

The company has already planned for a prolonged downturn in the oil market, with more cuts in capex and asset sales on the way. Shell has already announced the reduction of 2,800 jobs once the BG Group merger is complete. However, Van Beurden says Shell's main priority is to maintain its dividend at current levels. He believes the Shell-BG Group tie-up will strengthen Shell's balance sheet and is confident that the deal will go through.

Investor takeaway
Although this deal will help bolster Shell over the long run as it positions itself in markets that are likely to grow long-term, we do not know the possible ramifications from this depressed commodity environment and its effect on the balance sheet. It appears strong enough to support the deal right now, but a sustained low priced commodity environment could really devastate Shell's balance sheet (specifically its cash balance to cover losses).

Regardless, it's encouraging to see Shell become opportunistic in this low-energy-price environment, and BG appears to be an excellent strategic fit. However, it could be an ill-timed move for the company. Another few months of low oil prices will certainly weigh on Shell.

But Shell can't afford to let the deal slip away, since its oil and gas reserves have dropped precipitously over the past four years. So I expect the deal to go through, given the cash on Shell's balance sheet and the issuance of Shell shares to fund the deal, even if now isn't the best time to get the deal done.