Please ensure Javascript is enabled for purposes of website accessibility
Log In Help Join The Motley Fool
Free Article Join Over 1 Million Premium Members And Get More In-Depth Stock Guidance and Research
By Daniel Miller - Jan 25, 2016 at 11:11AM

Fewer people have driver's licenses, and as millennials move to cities, major automakers will have to adapt their businesses quickly.

It's a trend that's likely to continue as more millennials move to big cities, where public transportation is simple, and owning a car is more of a hassle.

As Americans drive less and need to own a car less, it spells trouble for major automakers such as General Motors (GM 3.63%) and Ford Motor Company (F 3.06%), which generate a massive portion of their profits from selling vehicles. However, that's not giving Detroit's two-largest automakers enough credit for the efforts both have put into their futures.

What's an automaker to do?
If your sole business is to produce automobiles at a time when your profit engine, North America, is driving less, what's the answer? Simple: Adapt. 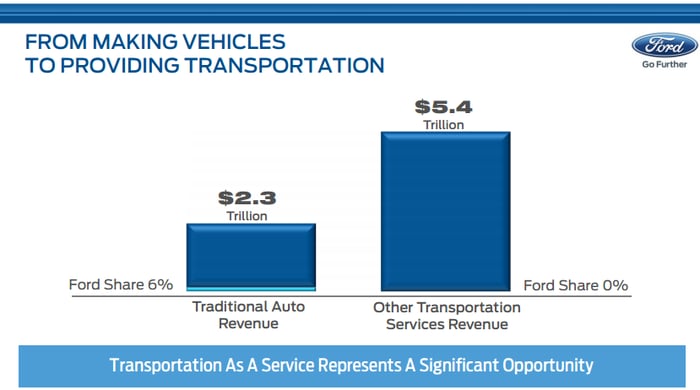 That looks like a whole lot of opportunity for Ford, as well as General Motors, to expand their businesses beyond the scope of designing and producing vehicles. General Motors has thus far made a bigger splash, and even this week has made multiple big-money moves.

General Motors announced its next step to change how the population uses a car-sharing service through its new Maven project, a service that combines a couple of different GM programs under one brand name. Consumers will simply use Maven's app to search for, reserve, unlock, and use a GM vehicle parked at 21 spots across Ann Arbor, Michigan.

GM notes that the pricing will be simple, transparent, and will include insurance and fuel. This week, Maven is expanding in multiple cities in the U.S., and to more than 100,000 people in Ann Arbor.

This isn't an intriguing development because Maven is a groundbreaking idea; it's because GM -- a company that maintains a $20 billion cash pile and has a fleet of its own vehicles -- is behind it. That immediately makes this a viable and legitimate competitor to start-ups with similar services, and has a high upside for GM investors.

GM isn't the only Detroit automaker eyeballing new ways to generate new revenue streams. Ford has started a number of programs and services designed to test new ideas. Ford is now piloting an on-demand Dynamic Shuttle service for its Dearborn, Michigan employees. It's one of Ford's new mobility solutions that will use ride-hailing technology to help change the way the world moves.

Next quarter, Ford plans to introduce a mobile-friendly Web portal, as well as a smartphone app for riders, but the goal isn't to out-Uber Uber. Rather, it's finding a gap between taxi service/Uber and public bussing -- or even carpooling -- as Ford's transit shuttle will carry six to eight passengers.

The intriguing part is that the potential of the program extends far beyond the automaker's initial testing. Consider that it could be very useful in developing countries, where owning a car is rare, and economic/job growth is outpacing public transportation infrastructure. That would make a great market for this shuttle service to take off. Ford also notes that the Dynamic shuttle could eventually extend to more applications, such as delivery services, or emergency medical transportation.

The graphic above emphasizes how many opportunities the major automakers overlooked to expand their businesses. Now that Uber is looking to raise funding that values the company at more than $62 billion -- more than Ford or General Motors -- you know that Detroit automakers are paying attention, and planning how to create the next big idea in transportation services.