What: Shares of generator manufacturer Generac Holdings (GNRC 3.97%) fell 11% in late trading Monday, giving up most of the gains from trading last week.

So what: Generac is often seen as a beneficiary of major storms, like the one that hit the East Coast over the weekend. Consumers typically buy more generators for backup power when a storm is coming, so investors were betting that a boost in demand would help Generac in January.

There's no doubt that more generators are sold when the weather is bad, but it's a short-term bump in demand that won't last unless the storms keep up. The same investors who bid up shares last week in anticipation of the storm are probably the ones selling shares and moving onto their next short-term idea today. 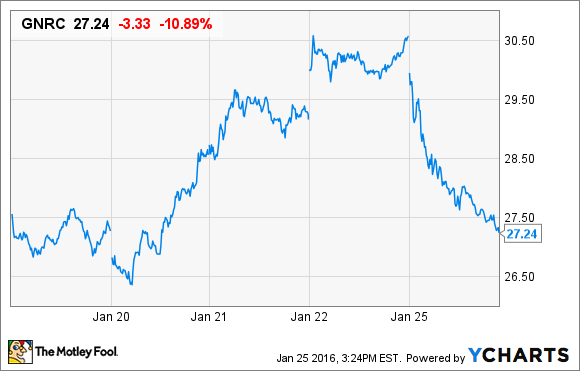 Now what: I wouldn't be concerned about today's drop because, as you can see above, shares are about where they were a week ago. In the meantime, nothing about the company has changed, except maybe an uptick in sales last week. Shares are trading at less than 10 times trailing earnings and sales ticked higher in Q3 2014, the most recent reported, even without a big storm season. Now the stock could be an even better value if January sales surge because of the winter storm Jonas.

Travis Hoium has no position in any stocks mentioned. The Motley Fool recommends Generac Holdings. Try any of our Foolish newsletter services free for 30 days. We Fools may not all hold the same opinions, but we all believe that considering a diverse range of insights makes us better investors. The Motley Fool has a disclosure policy.