Like most of its biopharma peers, Horizon Pharma (NASDAQ:HZNP) has gotten clobbered in the first few weeks of 2016. Specifically, the drugmaker's shares have traded downwards in near lockstep with the iShares Nasdaq Biotechnology ETF so far this year: 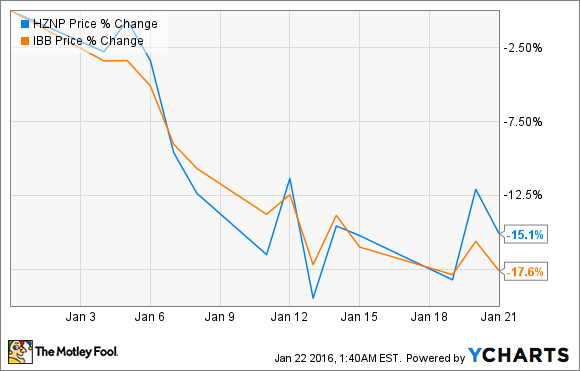 Unfortunately, this downtrend may be far from over. Here are three reasons why Horizon's shareholders may want to brace themselves for a rough 2016.

Reason No. 1: Pharmacy benefits managers have Horizon in their crosshairs
In late 2015, Horizon's stock surged after the company announced strong financial guidance for 2016 and beyond. 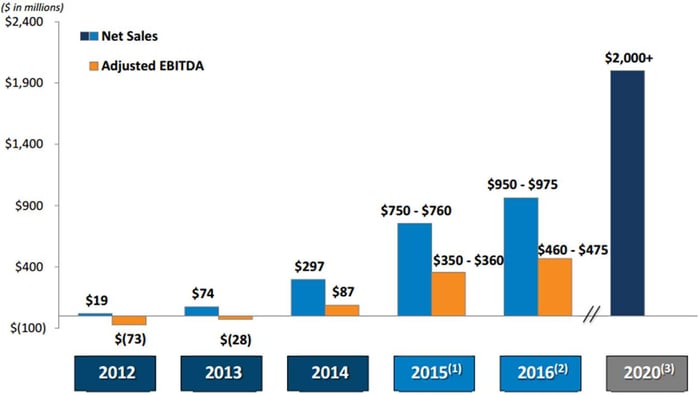 However, this optimistic financial outlook appears to hinge on the company's continued use of so-called specialty mail-order pharmacies that streamline the reimbursement process, and apparently remove the risk of generic competition to key products like the arthritis drug Duexis.

The problem is that top pharmacy benefits managers, or PMBs, have started to comb through their networks to suss out such entities. Express Scripts (NASDAQ:ESRX), for instance, reportedly dumped Linden Care pharmacy last November for its apparent near-exclusive relationship with Horizon, and even filed suit in hopes of recouping $140 million from the drugmaker. Unfortunately for Horizon's shareholders, this trend appears to only be growing, with several other PBMs now joining Express Scripts' fight against mail-order pharmacies.

Reason No. 2: Bernie Sanders may win the presidency
At the start of the race, the little-known senator hailing from Vermont seemed like a long shot to win the U.S. presidential election. With the Democratic primaries/caucuses now about to kick off, however, Sanders has surged ahead of Hillary Clinton in key states like Iowa and New Hampshire, according to recent polls. Perhaps most interesting is that several polls suggest that Sanders would also easily defeat Donald Trump -- the current leading Republican candidate -- in a general election.

Why would a Bernie Sanders presidency be a disaster for Horizon? Simply put, Sanders has made it clear that he would go directly after high-priced drugs like Duexis as a means to lower healthcare costs within the United States. While Horizon has argued otherwise, Duexis has been roundly criticized for seemingly being marked up by around 3,700% from its generic components. So, it stands to reason that medicines with such steep price premiums would among the first to be targeted in a Sanders-led reform effort.

Reason No. 3: Horizon's balance sheet isn't in tip-top shape
In Horizon's effort to diversify its revenue base and to move more into the orphan drug space, the company has taken on over $1 billion in debt through various acquisitions. The net result is that Horizon's balance sheet sports an healthy amount of leverage at the moment. According to S&P Capital IQ, for instance, the company's debt-to-equity ratio stands at 90.6% at last count.

The good news is that Horizon doesn't appear to be in any short-term financial trouble with a current ratio near 3. However, that situation could change in a hurry if the drugmaker is forced to slash its prices because of political headwinds, or loses market share due to the combined efforts of the major PBMs.

The Foolish bottom line
On paper, Horizon looks like it could be one of the fastest-growing mid-cap drugmakers in 2016. After all, the company is expected to grow its annual revenue by over 30% this year and its EPS by 23%. Because of the three issues mentioned above, though, investors may want to tread lightly with this particular growth stock. My bet is that the iShares Nasdaq Biotechnology ETF will eventually start to rebound this year, but Horizon will continue to head lower due to the lingering questions surrounding the sustainability of its business model.