Please ensure Javascript is enabled for purposes of website accessibility
Log In Help Join The Motley Fool
Free Article Join Over 1 Million Premium Members And Get More In-Depth Stock Guidance and Research
By Travis Hoium - Updated Jun 27, 2017 at 10:41AM

There may be more struggles ahead now that NRG Energy is betting on its fossil fuel business.

NRG Energy (NRG 2.37%) has been in free fall since mid-2014, and the company has been an example of all the problems plaguing the wholesale energy market. Power plants that once generated consistent profits selling into competitive markets are struggling as peak power rates fall.

A transition to renewable energy hasn't pleased investors, either. Profit growth didn't come as quickly as they expected and now NRG Energy is spinning off most of its green business. What more could hurt this electricity-generating giant in 2016? 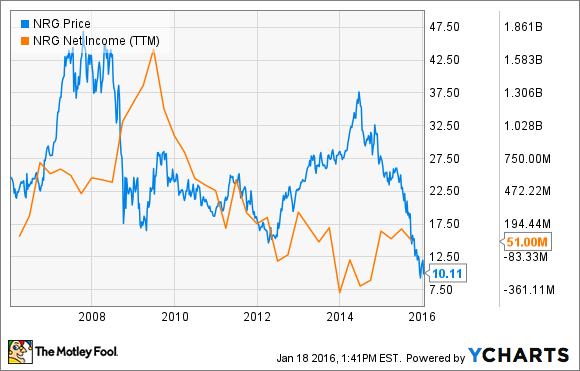 One of the disturbing trends for NRG Energy over the past year was the decline in the yieldco NRG Yield (CWEN 1.79%). The company was supposed to be a stable operator that owned primarily renewable energy assets with long-term contracts to sell energy. But some weak performance from wind farms this year and a general decline in the yieldco market sent shares plunging. 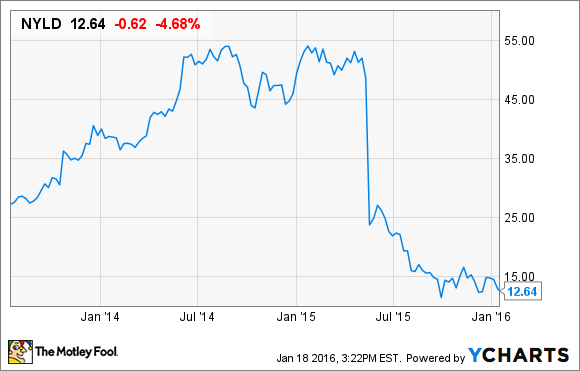 The problem with the low stock price for NRG Yield is that it'll make it harder for the company to expand and add cash flow-generating projects, which would eventually flow back to NRG Energy in the form of dividends and incentive distribution rights. If the yieldco doesn't recover from recent lows, it could put further pressure on NRG Energy's shares.

GreenCo assets are written off at a loss

One of former CEO David Crane's big projects was to develop NRG Energy into a renewable energy company. He did that by launching NRG Yield, which aligns fairly well with the traditional business, but he also bought assets that may end up being a bigger risk than he hoped.

Over the past few years, NRG bought Roof Diagnostics, Pure Energies Group, Verengo Solar's northeast sales and operations business, and solar consumer products company Goal Zero. The goal was to leverage NRG Energy's utility footprint to get customers to go solar and transform the business into a renewable energy powerhouse. But those acquisitions didn't work out quite how Crane had hoped.

Renewable energy, particularly in the residential space, is highly competitive and hasn't generated the kind of growth investors had hoped for. So, NRG Energy is spinning off the green business in an effort to attract a new kind of investor and focus the company on focused renewable growth. But I don't see how this combination of businesses makes for a winning strategy versus companies like SolarCity or SunPower. If the company is forced to write down those assets or can't spin them off at attractive prices, it'll hurt the stock further.

At the end of third-quarter 2015, NRG Energy had a debt load of $19.9 billion, an incredible sum for a company with a market cap of $2.9 billion. The problem with that level of debt is that net income is falling and interest costs are rising. The combination doesn't leave NRG Energy in a strong position unless it's either able to reduce debt or increase earnings.

In the future, debt providers may also look for higher returns from NRG Energy, determining that it's higher risk than they once thought. You can see below that interest expenses have been rising sharply over the past decade, partly due to the acquisitions I highlighted above. 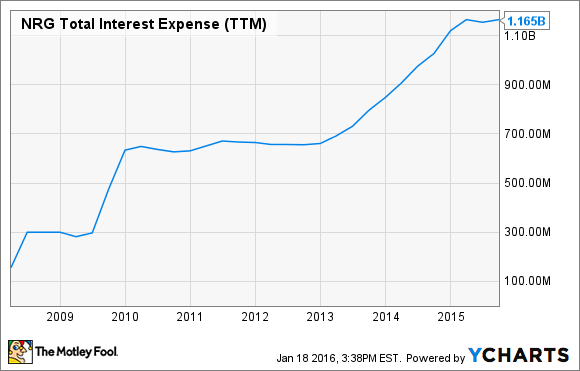 Debt is that one big risk energy companies face, and if earnings aren't able to keep up with debt costs, a business can fall apart quickly. Operational improvement is important, but keeping an eye on interest costs will be crucial for investors hoping for a stock recovery.

Get the latest NRG Energy stock news and facts.