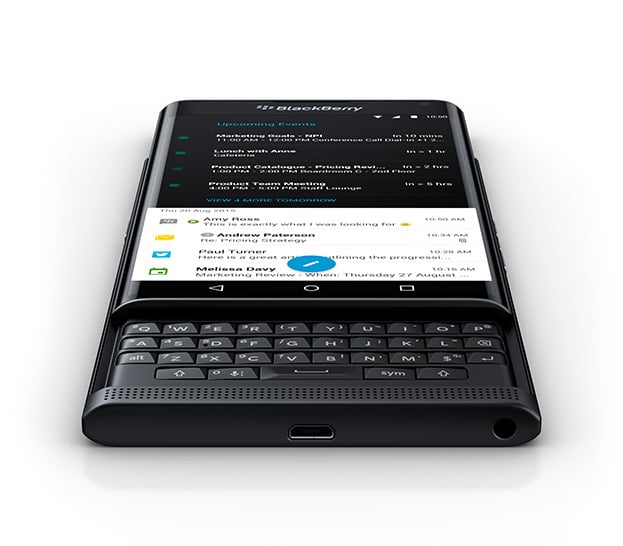 In the U.S., it's hard to sell a smartphone without carrier support.

Fortunately for BlackBerry (NYSE:BB), the company's flagship PRIV smartphone will soon be available on all four major U.S. carriers. This comes after just a few months of exclusivity with AT&T. The future of BlackBerry's handset business appears increasingly tied to the PRIV, and by extension, Alphabet (NASDAQ:GOOG) (NASDAQ:GOOGL) Android.

T-Mobile, Verizon, and Sprint
T-Mobile was the second major U.S. carrier to begin selling the PRIV, launching the handset on Jan. 26. Verizon will follow suit in March, while BlackBerry has confirmed that Sprint will also begin selling the PRIV though details are unavailable. Internationally, the PRIV will be available in 31 different countries by the end of February, up from just four at the end of November.

The additional support should help BlackBerry sell more units, as more consumers and enterprise customers get access. BlackBerry has been selling the PRIV unlocked (directly through its own website and a handful of major retailers) since it launched, but its arrival in carrier stores and the added benefit of phone financing should make the device significantly more accessible.

BlackBerry recognized revenue on only 700,000 handsets last quarter, down from about two million in the year-ago quarter. However, the PRIV launched just a few weeks before the quarter ended, limiting its contribution to the results. Still, it was able to boost BlackBerry's average selling price significantly -- the average BlackBerry handset sold for $315 last quarter, up $75 year-over-year. BlackBerry's next quarterly report, which should come in March, will provide a better sense of demand for the PRIV.

In the ballpark
More importantly, the PRIV played a crucial role in improving the profitability profile of BlackBerry's handset business. CEO John Chen has insisted that it would only continue selling handsets if it could do so profitably. BlackBerry's hardware business hasn't been profitable during Chen's tenure, but it's getting there. "We're in [the] ballpark now," Chen said on the company's December earnings call. Chen wasn't too specific in giving guidance but said the handset division could achieve breakeven within the next quarter or two. "Depending on how PRIV does in [the fourth quarter] -- there's a chance," he said.

Retailing for around $700, the PRIV is an expensive handset, especially for an underdog like BlackBerry. Other handsets that BlackBerry offers, including the Leap and Classic, sell for under $400. That price tag likely comes with the added benefit of higher margins, "For [the current quarter], I'm expecting sequential revenue growth in devices and higher gross margin," Chen said.

Future centers around Android
Speaking to CNet at CES 2016 earlier this month, Chen confirmed that BlackBerry would launch at least one new device this year, possibly two. Both would be powered by Android. In a blog post rewritten shortly thereafter, Chen clarified his remarks, reaffirming BlackBerry's commitment to its BB10 platform even as it develops additional Android-powered devices. But while BlackBerry will continue to support the BB10 operating system, Chen's blog post did not confirm the existence of any new BB10 handsets.

If BlackBerry is to continue making handsets, it will likely do so strictly as an Android manufacturer. The PRIV has received fairly strong reviews but faces enormous competition from Alphabet's many hardware partners. Long-time Android users who desire a physical keyboard could be persuaded to switch to BlackBerry, but BlackBerry diehards -- once hooked into Alphabet's ecosystem -- could more easily switch to a rival manufacturer.

Chen was asked about the PRIV's customers during the December earnings call. Were PRIV buyers coming from BlackBerry's established base of loyal fans? Or was it poaching customers from other Android handset-makers?

"[Our early PRIV customer base has been] dominated by BlackBerry customers, but we're seeing some other Android customers [come] over and [even] a small percentage of [iPhone owners]," Chen said.