BofI Holding, Inc. has been dealing with a serious short attack, with nearly 40% of shares sold short at last count. Will the upcoming quarterly earnings give us any insight into this saga?

BofI Holding, (AX 0.43%) is either a growth darling, one of the most profitable and efficient banks out there, or a house of cards, depending on whether you buy into the ongoing short attack that's been carrying on for months now or trust the bank's management. Since mid-October, shares are down 40%, and shares held short have spiked: 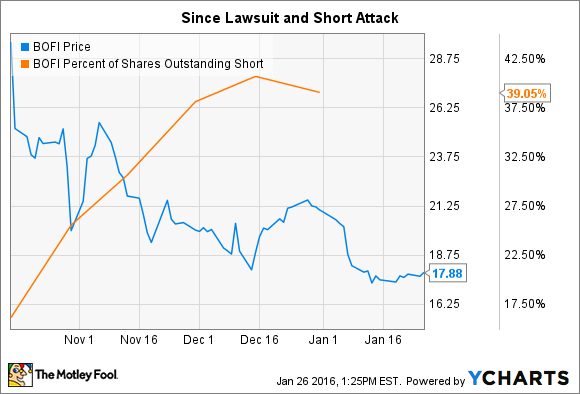 BofI reports earnings on Jan. 28, and management will yet again have the opportunity to address allegations that are being made and to provide evidence that disputes them while also giving a financial update on the state of the business.

What should investors watch for? Let's take a closer look.

Loan quality under question
Two of the key drivers behind BofI's incredible growth have been both the high rate of asset growth, both loans and deposits, and the high quality of those assets. Last quarter, BofI reported 0.57% of its loans were nonperforming, as compared to Wells Fargo & Co.(WFC 2.31%), which reported 1.4% of its loan assets were non-performing last quarter. Of that total, its nonperforming consumer loans rate was 1.95%. Bank of America (BAC 1.68%) reported 1.1% non-performing loan assets in its most recent quarterly earnings.

This actually brings up a recent accusation made against the company, that it was using unreported, associated corporate entities, in the form of Delaware-based LLCs to house nonperforming assets, such as commercial or residential mortgages that are in default or foreclosure, so that it can get these underperforming assets off its balance sheet.

The evidence presented to support the allegations against BofI is very thin on actual evidence, but it's something that management needs to clear up and be forthright about. The fact is, BofI has incredibly low rates of nonperformance, and management needs to make it clear that it isn't doing anything to artificially inflate the quality of its assets.

Was last quarter's result a fluke or a trend that will lead to higher-cost loan acquisition going forward? Time will tell, but it's a metric to keep an eye on.

Addressing the (new) allegations of misconduct by executives and audit committee members
Any company facing the kind of attacks that BofI has been dealing with over the past several months has a thin line to walk. The company should not dedicate too many resources to fighting what may be disinformation or outright lies, but at the same time, management has an obligation to shareholders to assuage those concerns and provide evidence to contradict the claims when it can.

There's also a time to take the high road, so to speak, and simply stop responding when there's nothing new to respond to or when the only thing that will refute the accusations is the business results and time.

I think it's likely that BofI's management will take a little bit of both approaches this earnings, shining a light on the things it can show to be untrue while not taking the bait on those that are either dubious or not fact-based attacks.

Looking ahead: Trust but verify
Banking is complex, and banking financials can be difficult to grasp. Add in the added complexity when crossing multiple state lines and using various legal entities for different purposes and it creates the potential for misdeeds (both intentional and unintentional) as well as an opportunity for short-sellers to create fear, uncertainty, and doubt about a company to send a stock lower. We've seen that play out here.

At the same time, BofI has yet to have any regulatory agency knock on its door, and that speaks volumes. In the current environment it seems that bank regulators would seize the opportunity to go after any bank that's doing half the things that BofI is accused of doing, so it's hard to ignore that important aspect of the situation. On the other hand, regulators can be very slow to move, and surely the market -- and short-sellers -- are banking on that happening at some point.

Put it all together and uncertainty has been winning out. Whether it's "sound and fury signifying nothing" or "where there's smoke, there's fire" is something time will tell, but management has an opportunity to put some of that uncertainty to bed this week.

What happens next? Stay tuned for more following the earnings release on the 28th.