Please ensure Javascript is enabled for purposes of website accessibility
Log In Help Join The Motley Fool
Free Article Join Over 1 Million Premium Members And Get More In-Depth Stock Guidance and Research
By Evan Niu, CFA - Jan 27, 2016 at 11:30AM

The iPhone maker is still planning on ramping up R&D spending and capital expenditures.

Global markets are in a bit of a rut right now, which is affecting even Apple (AAPL 2.14%). On last night's earnings call, Tim Cook acknowledged several important headwinds that Apple is facing right now. But despite the difficulties, Apple isn't swayed from investing in future growth. In fact, Cook says that investing during downturns has always proven to yield strong results farther down the line. Apple isn't scared.

R&D expense is moving on up
Apple has always been known for extremely efficient R&D spending, often comprising just a minuscule percentage of sales. While bears may equate lower spending to lower innovation, I consider it higher efficiency. Higher spending levels often translate into wasteful spending. In dollar terms, Apple spent just $8.5 billion research and development during 2015. But if you look at the company's R&D spending as a percentage of revenue, you'll notice that it's on the rise compared to historical levels. 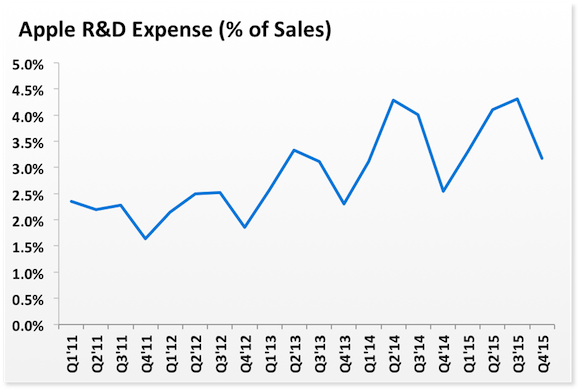 Of course, the real question is what is Apple spending all these development dollars on? We do know that it has hired over 1,000 auto engineers for the rumored Apple Car, although the head of Project Titan has now left the company and Apple reportedly implemented a hiring freeze within the division. Design chief Jony Ive is supposedly unhappy with the team's progress.

Apple is certainly continuing to invest in Apple Watch's pipeline, since the first-generation model has a long way to go to become a truly compelling product category.

Meanwhile, Cook acknowledged on the call that the nascent field of virtual reality is "really cool and has some interesting applications." The executive does not believe that VR will prove to simply be a niche, suggesting that Apple could be interested since the company typically only pursues mainstream market opportunities. Oh, Apple also just hired a prominent VR researcher too, by the way.

Apple is clearly searching for the next growth opportunity, and you can see it in the R&D figures. Cook said Apple continues to invest in R&D "without pause," saying that there are "great things in the pipeline."

When asked about this capex forecast on the call, CFO Luca Maestri reiterated that the plans are unchanged, even in light of the difficult macroeconomic environment. First and foremost, product tooling and manufacturing equipment always comes first in terms of priority. The company is also allocating a lot to expanding its data center infrastructure. With 1 billion Apple devices now in use, the company needs this infrastructure to deliver its various services. This year will also include a lot of spending for Apple's new spaceship campus, which is proceeding on schedule.