The Jeep Cherokee has been a huge hit for Fiat Chrysler -- so much so that the company is now working on boosting production. Image source: Fiat Chrysler Automobiles

The key numbers
FCA's net profit for the quarter fell to 251 million euros ($273 million) from 420 million euros in the year-ago period, after one-time charges of 834 million euros related to planned shifts in the company's production in North America.

For the year, FCA earned a net profit of 377 million euros. That again excludes Ferrari, which will report its fourth-quarter results separately on February 2.

North America was strong, results elsewhere were mixed
The big theme of FCA's earnings presentation was this: FCA is selling a lot of trucks and SUVs, and it's working on finding ways to increase production of those models. That's especially true of FCA's Jeep brand: Global shipments of Jeeps rose 21% in 2015 over 2014, and production lines making key models like the iconic Wrangler are running flat-out.

The company is making progress on CEO Sergio Marchionne's five-year plan. The adjusted EBIT margin in FCA's NAFTA region (North America) was 7.1% in the fourth quarter. That's probably still well short of what old Detroit rivals Ford (NYSE:F) and General Motors (NYSE:GM) will report in coming days, but it's up by 2.9 percentage points from the year-ago period.

Shipments in North America rose 9% during the fourth quarter, but revenues (up 23%) and adjusted EBIT (just over double) show that the mix of products sold was much more favorable than a year ago. Again, that's Jeeps and trucks, with new premium-trim versions of the Ram pickup line helping to boost profit.

It was a different story in FCA's LATAM, or Latin American, region. Difficult economic conditions in key markets like Brazil and Argentina have clobbered new-vehicle sales across the board. FCA's shipments were down 35% from the year-ago period, with revenue also falling 35%. The unit managed to eke out a tiny (29 million euros) adjusted-EBIT profit, however.

Shipments in FCA's APAC region, or Asia Pacific, also fell significantly during the quarter, dropping 54% to just 26,000. Part of that drop was due to losses inflicted by the Tianjin port explosion, as well as a reduction in imports generally as FCA transitions some products to local production. Volumes also fell in Australia after FCA increased prices to offset currency-exchange shifts.

Things were brighter in FCA's EMEA, or European, region. Shipments rose 15% during the quarter, and adjusted EBIT rose 23% to 111 million euros. FCA has now had five consecutive quarters of profitability (on an adjusted-EBIT basis) in Europe.

Looking ahead
This slide summarizes FCA's guidance for 2016: 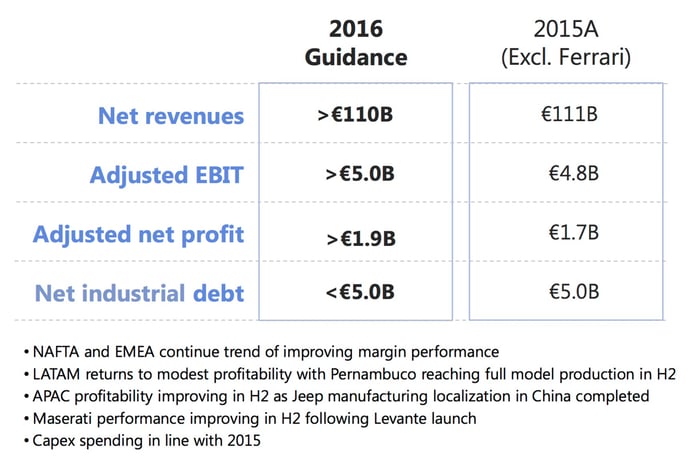 Note that "net industrial debt" is the amount by which FCA's debt exceeds its liquidity. The company had 24.6 billion euros of "available liquidity" as of the end of 2015, including 21.1 billion euros in cash and 3.4 billion euros worth of untapped credit lines.

FCA Sergio Marchionne also walked through some revisions to the company's current five-year plan, first announced in 2014. In a nutshell, it's slowing the planned rollout of a series of new Alfa Romeo models, and reshuffling its North American production to produce more pickups and SUVs. Marchionne and his team think low gas prices and high demand for SUVs are permanent shifts -- or at least permanent enough to drive the company's plans for the next few years.

The plan is to boost production of key Jeep and Ram models, but FCA isn't going to build new factories in North America: Instead, Marchionne said, it would find a "partner" to produce its next-generation compact and midsize sedans, allowing it to devote more of its existing capacity to truck and SUV production.

Details on the planned production shifts will be forthcoming soon, he said.