Please ensure Javascript is enabled for purposes of website accessibility
Log In Help Join The Motley Fool
Free Article Join Over 1 Million Premium Members And Get More In-Depth Stock Guidance and Research
By Rich Smith - Jan 27, 2016 at 10:13AM

Massive "beats" on both revenues and earnings result in a lower stock price. 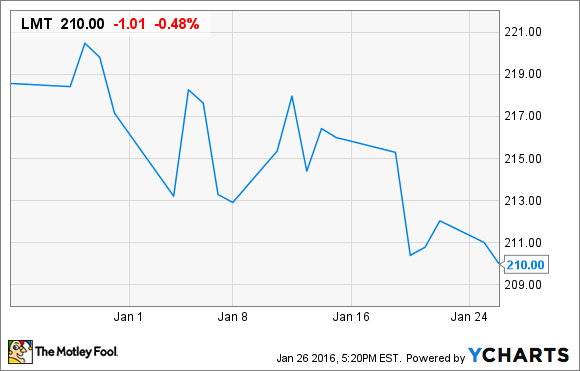 Lockheed Martin's stock sank with the rest of the market this month. These earnings aren't going to help. LMT data by YCharts.

Tuesday was a brilliant day for the U.S. stock market. The Nasdaq notched better than a 1% gain. The Dow jumped almost 2%. But Lockheed Martin (LMT -0.40%)? I'm afraid that was a different story.

To find out, let's take a step back and focus not on Q4's results in isolation, but on Lockheed Martin's full-year picture as a whole. (We only get a chance to do this once every four quarters, after all -- let's make the most of it.) In 2015, Lockheed Martin reported:

What's wrong with these numbers?
With $4.2 billion in cash profits and a $70 billion enterprise value, Lockheed Martin currently sells for an EV/FCF ratio of 16.7. That's cheap-er than the stock's 18.3 P/E ratio, but it's not cheap -- not with growth earnings rising only 2% last quarter, and not even if Lockheed manages to bump that growth rate up to the 7% that analysts are projecting for it over the next five years.

On the other hand, what if Lockheed Martin can keep growing free cash flow faster than its GAAP-calculated net earnings grow? Well, that would certainly be nice. But judging from the guidance Lockheed included in its earnings release, it's not likely to happen. This year, management is looking to grow sales as high as $51 billion (with a lot of help from its Sikorsky acquisition), but profits only 2.5%, and free cash flow -- unclear. With operating cash flow rising only to $5.3 billion, we're probably looking at a single-digit increase in FCF as well.

Long story short, the 40% growth in free cash flow that Lockheed Martin enjoyed in 2015 was a one-shot deal. Don't get used to it.

F-35 update
There's one final note on 2015 before we put this year in the history books. Earlier this week, we described how the production of Lockheed Martin's F-35 stealth fighter jet had accelerated to 12 planes in fiscal Q3, and we promised to check back in on Q4 production to see how well the ramp-up in production is progressing.

On that score, Lockheed noted that the 45 F-35s produced in 2015 included 14 planes produced in Q4 alone. As expected, that marked a slight increase in the pace of production from 2015. On the other hand, 14 planes also happened to be exactly the same number of F-35s Lockheed produced in Q4 of 2014. So, year over year, F-35 production didn't actually accelerate at all -- at least not in Q4.

Maybe, maybe not. But given that such a slowdown could pinch profits at the Lockheed supplier, this is something United Technologies investors will want to keep an eye on. And we shall.

Rich Smith does not own shares of, nor is he short, any company named above. You can find him on Motley Fool CAPS, publicly pontificating under the handle TMFDitty, where he's currently ranked No. 249 out of more than 75,000 rated members.