The once king of PCs is migrating to new, fast-growing markets, and it couldn’t have come at a better time.

Another decline in PC sales in 2015 didn't come as much of a surprise: It's been an ongoing theme for the past several years. What is surprising was the rate of decline in the PC market last year, and the ramifications for once PC-dependent tech kings including Microsoft (MSFT -0.85%) and Intel (INTC 0.04%).

Both Microsoft's and Intel's CEOs are well aware of the declining PC market, which explains why both are implementing their own versions of a mobile-first, cloud-first transformation.. But do declining PC sales really matter? And if so, how much? 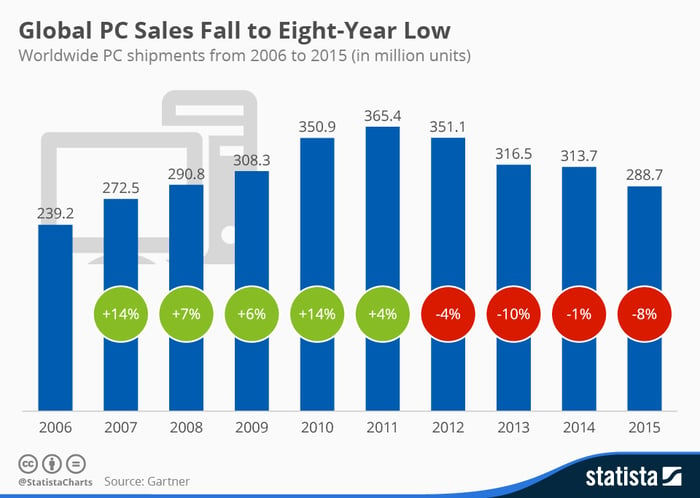 Just the facts
Investors need to harken back to 2011 to find the last year of PC sales growth. The PC market grew 4% in 2011, to more than 365 million units. But since then, four straight years of sales declines-topped off by 2015's 8% drop-have left the market in tatters.

To put last year's PC woes into perspective, it was the lowest number of global PC shipments since 2007. Currency headwinds played a part, particularly in emerging markets. However tablets were the primary culprit, and consumers using smartphones as all-in-one personal computing devices also played a role.

Does it really matter?
The drop in PC sales affected Microsoft last quarter, as its More Personal Computing division, home of its Windows OEM sales, reported a 17% drop in revenue.. Windows sales dropped 6% last quarter, and with earnings scheduled for Jan. 28, investors can expect more of the same. One of the few upsides to Microsoft's last quarter as it relates to PCs is that the drop in Windows revenue of "just" 6% was actually better than the overall desktop market.

The personal-computing business also took a hit from Microsoft's failing smartphone hardware sales, which saw a precipitous 54% drop in revenue year-over-year. Intel can certainly relate to the impact the lowest PC sales in eight years has had on Microsoft following its own fiscal 2015 Q4 and annual earnings.

Intel CEO Brian Krzanich's transitional efforts were responsible for overcoming much of Intel's 8% drop in PC-related revenue. The shift away from desktop sales is exactly why last year's eight-year low should play little-to-no part in either Microsoft's or Intel's fortunes going forward.

What does matter
CEO Satya Nadella's cloud-first pillar of his two-pronged initiative is paying off handsomely for Microsoft and its shareholders through a boost to its revenue from cloud-based services. Microsoft stock has been under pressure this year, but that has as much to with the recent broad-market sell-off as it does with poor 2015 PC sales.

Better still, Microsoft's cloud-revenue growth should continue throughout 2016, particularly thanks to Nadella's decision to focus on Software-as-a-Service (SaaS) delivered via the cloud. SaaS is expected to be one of the fastest-growing areas within the cloud-computing market, and with its industry-leading software product suite, no one is better positioned than Microsoft.

Intel has taken another approach to increasing its presence in the cloud, and it, too, is reporting impressive results. Along with the Internet of Things (IoT) division, Intel's cloud-specific data-center sales is quickly becoming its most important division to drive growth. For the year, Intel's data-center unit reported $16 billion in revenue, an 11% improvement compared to 2014, and equal to nearly half its PC-related sales.

Microsoft's mobile-first strategy is also taking hold. Getting Windows 10 and Windows Phone operating systems into as many devices as possible, regardless of manufacturer, is paying dividends. Last quarter's 29% in Bing search ad revenue was driven by "Windows 10 usage."

The bottom line: Microsoft, like Intel, is not tethered to PC sales any longer. And even the worst PC sales results in eight years doesn't change Microsoft's status as one of the best growth and income investments in tech.

Tim Brugger has no position in any stocks mentioned. The Motley Fool recommends Intel. Try any of our Foolish newsletter services free for 30 days. We Fools may not all hold the same opinions, but we all believe that considering a diverse range of insights makes us better investors. The Motley Fool has a disclosure policy.