Navios Maritime, Scorpio Bulkers, and Star Bulk Carriers all get upgraded by the investment banker.

All is not well in the dry goods shipping business. With the Baltic Dry Index currently sitting at levels nearly two-thirds below its recent 2010 peak, shares of shippers such as Navios Maritime (NYSE: NMM), Scorpio Bulkers (NYSE: SALT), and Star Bulk Carriers (SBLK 0.79%) -- and DryShips (DRYS), too -- are plumbing new depths on the stock market.

And yet, JPMorgan loves them.

The news
Well, JP loves the first three stocks on that list, at least. Yesterday morning, the investment banker announced new upgrades to overweight on both Navios Maritime and Scorpio Bulkers. Star Bulk only got an upgrade to neutral -- but hey, any port in a storm. With shares that have fallen 84%, 83%, and 90%, respectively, over the past year, each of these stocks should be happy to receive any kind words at all from Wall Street.

And a kind word from JPMorgan, one of the biggest investment bankers on the planet? That's just golden.

Or at least it should be.

Let's go to the tape
You see, we've been monitoring JP Morgan's performance here at Motley Fool CAPS for nearly a decade now. Ranked in the top 10% of investors we track, it's one of the best in the business, with its average stock pick outperforming the market by better than 5 percentage points. And yet, when it comes to shipping stocks -- "marine" in industry parlance -- JPMorgan's record leaves something to be desired.

Most active in the marine sector back during the commodities market heyday of 2006-2008, JPMorgan made 10 public recommendations of the stocks it liked best -- but fewer than 40% of them panned out. Here's a quick recap of some of its more notable calls:

So what are the chances JP Morgan will do any better with this week's recommendations?

Valuing the bulkers
Of the three stocks upgraded by JPMorgan on Tuesday, only Navios Maritime is both currently profitable and expected to remain so next year. Navios, however, is also carrying (begging your pardon) a boatload of debt -- $600 million worth, versus just $25 million in cash. Scorpio and Star Bulk, meanwhile, have no profits currently, are expected to earn nothing this year, and are weighed down by debt.

None of that sounds particularly promising. So why does JPMorgan like them so much? Well, it's not entirely clear. No major media outlets seem to have details on JP's Star Bulk recommendation, for example.

On the other hand, in the case of Scorpio, we know that JP Morgan thinks investors are overestimating the liquidity risk. The shipper has solved a lot of its debt problems with recent sales of ships from its inventory. (Scorpio, as you'll recall, spent most of 2013 buying new ships -- only to turn around and sell them this year when the market didn't cooperate with it). While hardly flush with cash today, Scorpio's $274 million in cash on hand gives it a nice cushion against more than $400 million in debt coming due. You could argue Scorpio is in an even better financial position than the poster boy for the dry bulk shipping industry, DryShips, where debt is nearly as big ($333 million) but cash reserves are a whole lot smaller -- barely $100 million.

Put more simply, if investors are pricing Scorpio for bankruptcy, JPMorgan doesn't see that as a real risk.

At Navios Maritime, the picture's even prettier. Profitable and growing revenues, Navios's P/E ratio of less than 4 times earnings is cheap enough to attract any investors' attention. On the other hand, that debt load is still a concern, and most analysts who follow the stock expect to see earnings decline in future years, even if revenue rises. And on the other other hand, while profitable according to GAAP accounting methods, Navios isn't currently generating positive free cash flow from its business. Rather, S&P Capital IQ data show Navios burning cash at the rate of about $80 million per year.

What it means to investors
Given all this, what's an investor to do?

Personal situations differ, so in contrast to JP Morgan, I won't tell you which course is best to take with your personal finances. I can, however, tell you how I look at this industry: 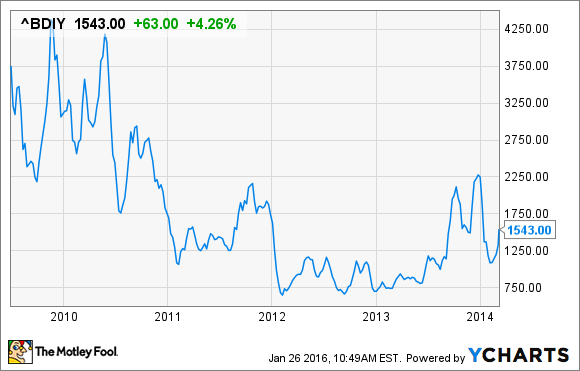 One of the topsy-turviest industries on the planet, dry bulk shipping is not a place for the faint of heart to invest. ^BDIY data by YCharts.

Dry bulk shipping rates wobble up and down frequently -- and dramatically. It's an incredibly risky sector of the market to invest in. That being the case, I'd be looking to limit my risks as much as possible before venturing here. In that regard, Navios Maritime is probably the "safest" shipping stock JPMorgan has recommended this week, for simple reason that it's the only stock named so far that seems to know how to earn a profit.

Alternatively, Scorpio has done the best job of right-sizing its debt load with asset sales, and is now one of the less leveraged stocks in the sector. While I can't say anything good about its wisdom in buying all those ships in the first place, at least management realized its mistake before it was too late.

And long story short? I'm surprised to find myself largely in agreement with JPMorgan on these recommendations. I think all dry bulk stocks are too risky to invest in myself, and would not buy any of them. But as far as risk mitigation goes, I think JP's correctly picked a few of the least-leaky boats in a very stormy sea.