Please ensure Javascript is enabled for purposes of website accessibility
Log In Help Join The Motley Fool
Free Article Join Over 1 Million Premium Members And Get More In-Depth Stock Guidance and Research
By Daniel B. Kline - Jan 27, 2016 at 9:00AM

The company faces questions regarding its principal shareholder and executive chairman as well as negative headwinds in one of its key industries.

But, while overall revenue was down, the company was encouraged by the success of its Media Networks division, which includes the cable channels MTV, Comedy Central, Spike, and Nickelodeon. Those properties posted a full-year increase of 3%, to $10.49 billion, due to increased affiliate fees and a slight gain in global advertising.

That's a very positive performance in a difficult climate for cable networks, which are facing pushback from cable companies over carriage fees and lower subscription numbers due to cord-cutting. Unfortunately for Viacom, the company's overall year was hurt by a 23% drop in revenue from its movie division, which was hurt by underperforming films including Terminator: Genisys, The Gambler, and Scouts Guide to the Zombie Apocalypse.

"Viacom's fourth quarter and year-end results are indicative of our progress in key areas, including recent ratings improvement and renewals of important distribution agreements," he said in the company's Q4 earnings release. "Our strategy of increasing and accelerating investment in original content and expanding our profitable international footprint are among the major factors driving this success, which we believe will continue in 2016 and beyond."

Redstone echoed those statements in his printed remarks, but it's questions about the 92-year-old business icon that may tell the story for the company's 2016. 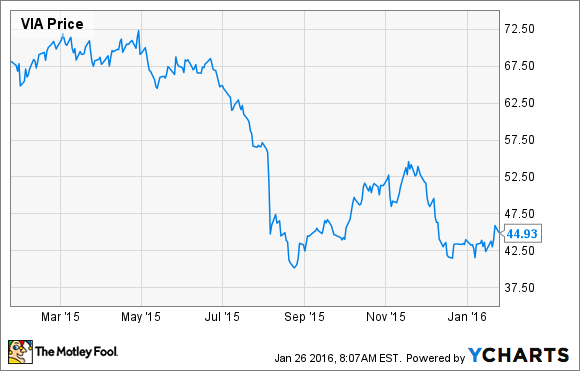 What's wrong with Redstone?
Shareholders of both Viacom and CBS (PARA -2.06%) have hit the two companies with a lawsuit claiming that executives of both companies have "put their personal loyalty to Mr. Redstone (in particular, and secondarily to [Shari] Redstone) well ahead of their loyalty and respective fiduciary duties they owe and owed to Viacom and/or CBS and their respective shareholders" since October, 2013 The Hollywood Reporter reported.

Since Viacom and CBS split into two separate public companies in 2006, Redstone has been the controlling shareholder in both. He currently carries the executive chairman title at Viacom and CBS. His daughter Shari is vice chairman of the board for both companies. Dauman serves as CEO for Viacom, while Les Moonves leads CBS as its CEO.

The lawsuit objects to millions of dollars in bonuses paid to Redstone, "while he was physically and mentally incapacitated and, according to his principal caregiver ... was 'unable to communicate reliably or competently manage his own healthcare,' and certainly unable to fulfill the responsibilities for which he was paid," THR reported.

The actual state of Redstone's health has been a bit of a mystery. His former caregiver and girlfriend Manuela Herzer has repeatedly questioned his competence, which has been fought by Redstone's lawyers, according to CNN Money.

The embattled executive chairman has been ordered to undergo a one-hour mental exam to determine his competency, which is being fought by Redstone's lawyers.

Why does this matter?
Redstone may not be the day-to-day boss of either company, but his stock position in both gives him control even now that he is not sitting in the CEO seat for Viacom or CBS. Both companies have very competent CEOs in charge, but fighting shareholder lawsuits and dealing with family succession issues are unneeded distractions.

It may not be a major problem, but at a time of great upheaval in the cable industry, Viacom's leaders (as well as CBS's) have to spend time defending whether Redstone is competent. If he isn't -- and both companies strenuously say he is -- it's also likely a negative going forward that Viacom and CBS have lost the counsel of a man who has been successful for so long.

Will this be Viacom's best year?
It seems more likely that 2016 will be a transitional year for Viacom rather than a record-breaking one. In addition to the sideshow regarding its longtime leader and principal shareholder, the company operates in a space that is facing significant challenges.

While it's impressive that Viacom was able to grow its cable network revenues in 2015, it now faces an industry that has been losing subscribers where the major cable companies are desperately trying to keep costs in check. This should lead to it becoming increasingly challenging for cable channels to increase carriage fees, while having fewer viewers will put pressure on ad sales.

The company should, however, see a bounce-back in its movie division with a new Transformers movie, Star Trek Beyond, and a Teenage Mutant Ninja Turtles sequel on its 2016 slate. Still, even if the film division does better, Media Networks will struggle to keep the gains it made in 2015.

It's not impossible for the company to put up record numbers in 2016, but its leadership problems, as well as the market it operates in, specifically in the pay-television space, make it unlikely.

Daniel Kline has no position in any stocks mentioned. He finds nothing more uncomfortable than The Today Show talking about social media. The Motley Fool has no position in any of the stocks mentioned. Try any of our Foolish newsletter services free for 30 days. We Fools may not all hold the same opinions, but we all believe that considering a diverse range of insights makes us better investors. The Motley Fool has a disclosure policy.