From time to time, the stock market goes a little haywire. Something scares investors and they start to sell.

As fear builds, justified or not, even the smallest spark can light the fire. When the fire is lit and the market is crashing, interesting and scary things can happen. And yet, throughout history, the long-term trend remains from the lower left to the upper right.

Here are seven particularly interesting facts about past stock-market crashes that should help to remind you that things can get pretty insane. Yet over the long term, we are all still here, still investing, and continuing to build wealth.

1. A stock market crash doesn't foretell economic doom.
Between 1965 and 2015, the S&P 500 has declined by more than 10% a total of 27 times. During that same period, the U.S. has only experienced seven recessions. Sometimes, a stock-market crash can mean a recession is on the horizon, but usually, these sharp corrections are just normal market movements, and not indicators of underlying economic problems.

2. Bear markets, on the other hand, have a much higher correlation to fundamental economic problems.
Since 1950, the S&P 500 has experienced nine bear markets and 10 recessions, with October 1987's Black Monday being the lone exception. A bear market is generally defined as a market downturn in excess of 20%.

At the time of this writing, the S&P 500 is just more than 10% below its high during the past year. To reach bear-market territory, the S&P would still have to decline a substantial amount.

Will the decline continue? No one knows; but it's worth keeping this perspective when you feel fear creeping into your decision making. 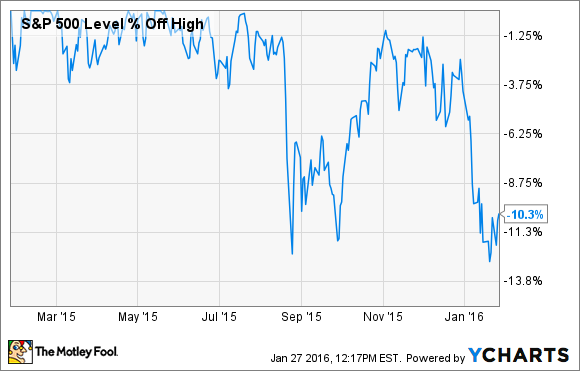 3. The stock market crash of 1929 was ridiculously bad.
On Black Thursday, October 24, 1929, the market lost 11% at the opening bell. That was followed by Black Monday on October 28, where the market lost another 13%. The next day, the market dropped another 12%. This collapse ushered in the great depression, which saw unemployment peak above 30% in the U.S.

In the three years following the stock market crash of 1929, the S&P 500 fell 86%. It wouldn't recover to its previous peak for another 32 years.

4. When the world goes to war, financial markets freak out.
On the eve of World War I, financial markets around the world panicked, and investors sold their stock holdings to buy massive quantities of gold, the safest liquid asset of the day. On July 31, 1914, the London Stock Exchange closed trading to halt the huge volume of panicked selling. The exchange wouldn't reopen for five months. Markets in the U.S. also closed on July 31, halting trading for four months.

For a full six-week period in August and September of 1914, every single financial exchange in the world was closed, with the sole exceptions being the exchanges in New Zealand, Tokyo, and the Denver Colorado Mining Exchange.

The good fortune didn't last, as the market experienced its fifth-worst day ever on October 26, falling 8.28% one week after the initial Black Friday crash. The month ended down 21.8% overall from September 30 to October 31.

My neck feels whiplashed just from writing about these dramatic ups and downs during a single week of trading.

6. As crazy as October 1987 was, the financial crisis in 2008 and 2009 was even crazier
As far as stock-market crashes go, 2008 and 2009 saw more action than arguably any period in history. From September 29, 2008 to March 23, 2009, the S&P experienced nine of its top 20 largest single-day percentage declines. This includes the index's second-, third-, and fourth-largest percentage declines in history on October 15, December 1, and September 29, respectively.

7. One stock market crash tied in with the Fed?
Beginning in 1979 and continuing through 1982, the Federal Reserve raised interest rates to more than 20% in an effort to fight off persistently high inflation in the U.S. The plan worked, but it also likely contributed to the S&P crashing sharply in 1980 and again in 1981-1982, coinciding with two recessions. In the end though, inflation was defeated, and the booming '80s replaced the stagflation of the '70s.

That fact makes this stock-market crash unique in U.S. history, as it was likely in part due to the Fed's dramatic rate hikes. 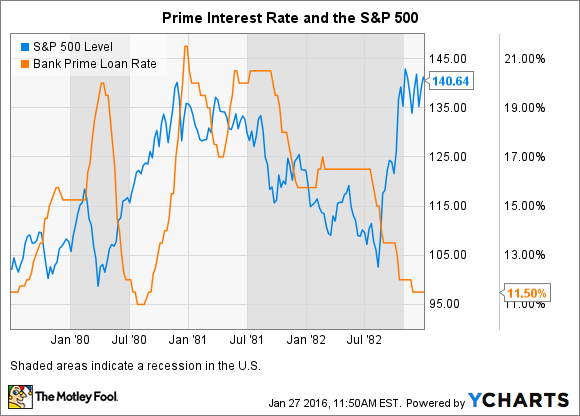 The year 2016 has gotten off to an historically bad start in the markets; but as history has shown, that doesn't necessarily mean that the rest of the year will be particularly good, bad, or otherwise. The only thing we can say for sure is that the stock market will crash from time to time, and when it does, many investors will panic.

History has repeatedly shown that no good comes of that panic. No matter how crazy the market gets, it always finds a way to get back on track.