Premium "craft" brands continue to pressure Diageo's once-dominant liquor lines. But the U.K.-based distilled spirits giant is responding with its own premium lines -- and with apple-flavored vodka -- as it works to get global sales back on track.

Diageo has responded to pressure from "craft" producers with new lines like the premium Don Julio tequila brand. But its once-dominant core products continue to struggle. Image source: Diageo.

Lower U.S. sales as pressure from "craft" brands continues
North America is far and way Diageo's most important market, but organic sales in the region fell 2% from the year-ago period. That was within the company's previous guidance: Former CFO Deirdre Mahlan had warned that 2016 would be a "transition year" as the company moved away from shipping large supplies of new products to wholesalers, to a system more in tune with actual retail demand. 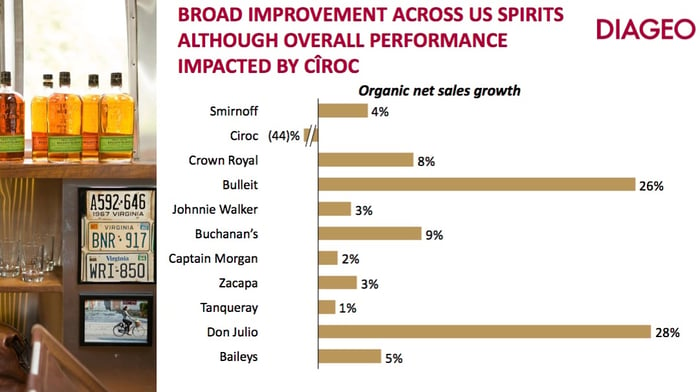 Diageo has responded with some premium products of its own, getting good market traction with the Bulleit bourbon and rye whiskey lines and its premium Don Julio tequila brand. But its attempt at a premium vodka, Ciroc, has so far failed to perform well, hurting overall results.

New CFO Kathryn Mikells said that the company is responding with new flavored varieties of key products. A "Regal Apple" variant of Crown Royal whiskey drove much of the line's 8% growth in North America in the first half of fiscal 2016. Mikells said that the company is debuting a new apple-flavored version of Ciroc in an attempt to boost that line's results as well.

The story was somewhat better in other regions: Sales in Europe and Africa rose 3%, while Latin America and the Caribbean posted a 9% gain and Asia-Pacific sales increased 2%.

The outlook: CFO expects "muted" improvements
Mikells said that North America sales should improve in the second half of fiscal 2016 over year-earlier results. But those fiscal 2015 results were hampered by the "destocking" efforts, or selling down of inventories, that preceded Diageo's transition to its more demand-based, retail-focused model. Those efforts are coming to an end around the world, and while Mikells expects currency headwinds in Latin America to put continued pressure on results, she forecast "muted" improvement in Diageo's margins for the full fiscal year.