Please ensure Javascript is enabled for purposes of website accessibility
Log In Help Join The Motley Fool
Free Article Join Over 1 Million Premium Members And Get More In-Depth Stock Guidance and Research
By Travis Hoium - Jan 28, 2016 at 9:12AM

As the streaming business evolves, these stocks provide a better value for investors.

Netflix (NFLX -1.83%) has been an incredible stock over the past decade, climbing 2,760% from its pre-streaming days. It's managed to go from a DVD-mailing company to a household name in streaming. With over 75 million subscribers, it has one of the widest distribution reaches of any media company.

But Netflix is also a company that's barely profitable and trades at nosebleed earnings multiples for investors. As the streaming business grows and competition for streaming dollars increases, I think there are a few better options for investors. 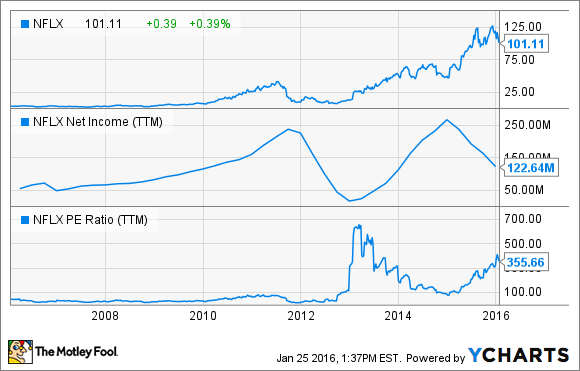 Time Warner
Content ownership is the name of the game in today's media business, and Time Warner (TWX) has one of the best libraries and most innovative studios around. Game of Thrones, Silicon Valley, and The Sopranos are just the beginning of the company's library on HBO, and it keeps getting bigger every week. While Netflix is only now starting to build its own content, Time Warner and HBO have a decades-long head start in content and have already launched a streaming-only service. 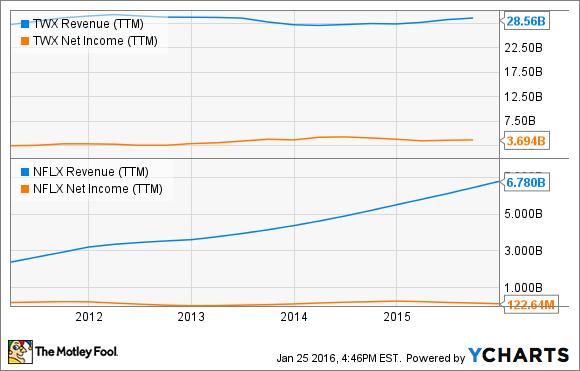 From its current size, Netflix would have to grow revenue by about 4 times over to reach Time Warner's level of revenue. Netflix could grow that much, but I'll take the establishment advantages Time Warner brings to the table.

NBC Universal
No one is more aware of the threat streaming TV presents than Comcast (NASDAQ: CMCSK). The acquisition of NBC Universal was driven by the company's need for content and that gives it lots of options in the future.

Comcast's net income has grown 550% over the past decade, a faster rate than even Netflix:

NBC Universal even produces one of Netflix's most popular shows, Master of None, which is often presented as if it's a Netflix creation.  Given the content NBC Universal produces and distributes, Comcast's legacy cable revenue, and the ongoing revenue the company will generate from being an Internet provider, I think the company is a safe bet to be a powerhouse in media decades from now.

Disney
What's not to like about what Disney (DIS -1.55%) has done in the past decade? It bought Pixar, Marvel, and Lucasfilm, giving the company some of the best media content anywhere in the world. It's also using lower-level content to sell to streaming services such as Netflix. Marvel's Jessica Jones  and Daredevil  are great examples of how those assets are being exploited by Disney on third-party streaming platforms.

There are also myriad options for Disney's content, including more partnerships with companies like Netflix and Hulu, which the latter of which it owns a large stake of, and launching its own apps. And let's not forget that Disney owns an 80% stake in ESPN as well.

In the next few years, I could see Disney launching its own streaming content platform, cutting out the middlemen like cable companies that take revenue opportunities away. This could expand the company's reach around the world and grow revenue. And because it owns its own content, I like its position much more than that of Netflix.

Netflix's biggest problem today
The core advantages I see Time Warner, Comcast, and Disney having over Netflix is a massive head start in developing content and a much more reasonable valuation for investors. The truth is that Netflix has never been able to charge significantly more than content and distribution costs, leaving very little earnings for investors. The market has overlooked that fact for a long time, but eventually profits matter, and I think the odds are better that its three content competitors will be able to generate earnings long-term than they are that Netflix will generate enough to justify its current valuation.

Travis Hoium has no position in any stocks mentioned. The Motley Fool owns shares of and recommends Netflix and Walt Disney. The Motley Fool recommends Time Warner. Try any of our Foolish newsletter services free for 30 days. We Fools may not all hold the same opinions, but we all believe that considering a diverse range of insights makes us better investors. The Motley Fool has a disclosure policy.