In mid-2015, Intel (INTC -2.31%) told investors it would be bringing to market a "third wave" of products built on its 14-nanometer chip manufacturing technology known as Kaby Lake. According to Intel's CEO at the time, Brian Krzanich, Kaby Lake would be "built on the foundations of the Skylake micro-architecture but with key performance enhancements."

Although the scope of the enhancements is not yet fully known, there is one enhancement I believe will be the "star" of the Kaby Lake show. I'd like to explain this enhancement and why it was so important for Intel to bring it out as soon as possible.

Hardware 10 bit HEVC and 10 bit VP9 support
One of the most important pieces of a modern-day mobile processor is the dedicated circuitry on board that's designed to decode and encode video. Video playback and, to a lesser extent, capture are extremely important use cases for modern battery-powered devices.

In order to stream a video over a reasonable Internet connection, that video needs to be compressed -- that is, it needs to be converted into a format that takes up much less space than the "raw" footage does.

In order for these compressed videos to be played back, they need to be decompressed, or decoded. This can be done by the main CPU in a computer, but it's usually very CPU-intensive. Dedicated hardware designed to decode such video streams is usually substantially more power-efficient, which is why mobile processor makers strive to include hardware support for the latest video formats.

Two video standards viewed as key to allowing for streaming of 4K videos to be viable are the High Efficiency Video Codec, or HEVC, and VP9. 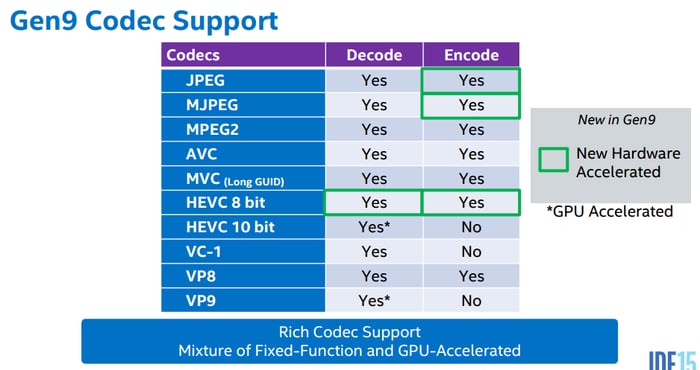 As you can see in the slide above, Intel's latest Skylake processors have full hardware support for 8-bit HEVC video streams (a substantial improvement over the prior-generation Broadwell chips).

However, 10-bit HEVC video playback isn't fully hardware accelerated, nor is VP9; in order to playback videos encoded in those formats, the media engine onboard Skylake needs to work in concert with the computing resources found in the graphics processor, leading to greater power consumption.

With Kaby Lake, however, Intel is expected to add in full hardware support to encode both 10-bit HEVC as well as VP9 video streams. In other words, Kaby Lake should be much more efficient at playing back high-definition videos. Further, support for 10-bit streams should come in handy as PCs (and in particular, all-in-ones and notebooks) transition from panels with 8-bit color depth to 10-bit color depth.

This was a good move from Intel
Although it was unfortunate that Intel could not ready its 10-nanometer Cannonlake processor for a mid-2016 launch as originally hoped (because of a delay in 10-nanometer production ramp-up), it's good that Intel will provide an updated processor family with support for these newer video decode and encode engines.

These improvements should allow system vendors to offer interesting new features to customers (particularly vendors aiming to provide systems with high-resolution displays), and it should also allow Intel to maintain strong competitive positioning in the PC marketplace.