Please ensure Javascript is enabled for purposes of website accessibility
Log In Help Join The Motley Fool
Free Article Join Over 1 Million Premium Members And Get More In-Depth Stock Guidance and Research
By Travis Hoium - Jan 28, 2016 at 11:30AM

The future of SunEdison Inc. is up for grabs.

No one really knows what the future of SunEdison Inc. (SUNEQ) looks like. The company has built a massive backlog of renewable energy projects, but it's running into financial trouble because of debt and losses that has caused the stock to drop over 90% from its 52-week high.

Here's a look at both the good and the bad of this renewable energy company.

The good
SunEdison has 2.9 GW of wind and solar projects under construction around the world and those projects could generate a significant amount of value in 2016. Yieldco dropdowns are likely out given the struggles for TerraForm Power and TerraForm Global, but warehouse vehicles and third-party asset sales could generate billions in cash this year.

SunEdison says that it generated a 17% gross margin on sales to third parties and continued sales could help pay down nearly $12 billion in debt (a figure that will change dramatically by the time first-quarter results are announced).

Along with its large pipeline of projects, SunEdison has built a large operating and maintenance business with the projects it owns and has sold. Management projects O&M will generate $443 million in revenue in 2016 and $223 million in EBITDA. That alone could help service debt if the company can continue with third party sales.

If SunEdison can start unlocking the value it has to reduce losses and debt, it could have a big rebound on the market.

The bad
It sounds simple enough to just build renewable energy projects, sell them for a profit and move on to the next one. But SunEdison has shown that there are a lot of growing pains in becoming a renewable energy powerhouse.

The chart below may be the most telling for investors. The company's debt has exploded in the past two years and SunEdison is still reporting massive losses. 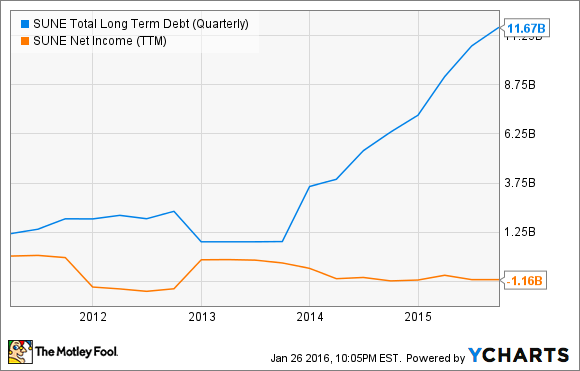 These losses are partly due to accounting rules that don't fully count profits for projects sold to its yieldcos, but even if those projects were counted, the company would still be losing money.

To make matters worse, the last debt exchange it did came with an interest rate of 11% or more, depending on where LIBOR goes. That's insanely high for a project developer, and if those rates keep up for debt, it'll make it almost impossible to execute on any sort of long-term strategy. Low rates of return for debt and equity (yieldcos) are a necessity in today's renewable energy market and that's working against SunEdison.

Is SunEdison set up for a good or bad year?
There are a lot of risks facing SunEdison in 2016, especially considering the decline of its yieldcos. It needs to find buyers for billions of dollars in renewable energy projects and deleverage the balance sheet. There's no guarantee it will find willing buyers, especially in the current depressed energy market.

Until management can show progress on executing its current sales strategy, this is a stock I'm staying out of. There are higher-quality renewable energy companies out there that are safer bets for investors than SunEdison. But that doesn't mean the stock can't recover. All of that debt gives the stock a lot of leverage, and if management shows the ability to turn around its operating fortunes, the stock could recover some of the losses it's had in the past six months.

Will 2016 Be Cloudy for These 2 Solar Companies?