Please ensure Javascript is enabled for purposes of website accessibility
Log In Help Join The Motley Fool
Free Article Join Over 1 Million Premium Members And Get More In-Depth Stock Guidance and Research
By Chris Kuiper, CFA – Jan 29, 2016 at 6:20AM

Both are great companies, but the future of Apple is looking uncertain while Alphabet keeps looking for the next big thing.

If you had to pick only one long-term growth stock, would you pick Apple (AAPL 2.56%) or Alphabet (GOOG 3.13%) (GOOGL 3.04%)? Sure, it's a bit of a silly question, as investors usually don't have to go all-in or nothing, and they're certainly entitled to change their opinion over time. However, I find it can be a great thought experiment that helps clarify how companies are competitively positioned for the future. In this case, I would pick Alphabet hands-down. Here's why:

A tale of two companies
When talking tech stocks, investors often mention Apple and Alphabet together, but they're actually very different companies. Alphabet's primary revenue source is advertising through search, and it's therefore a software company at heart. Apple's revenue is derived from device and hardware sales.

I understand Apple is also very much a software company that hires top talent to make all of its devices run seamlessly together. The reason the iPhone and other Apple devices have such high margins is not just the premium materials and physical design -- it's also that it's the only way to get access to Apple's software and ecosystem. Apple has always believed that great software needs to be married with great hardware to work well.

That said, the recent performance of Apple's stock shows that it's still ultimately driven by how many phones it sells. In its latest quarter, the iPhone comprised 68% of revenue. Recently, the slowdown in iPhone and smartphone sales have crushed Apple's market value. The company sold 74.8 million phones in the last quarter, which was flat on a year-over-year basis. Revenue for the current quarter was also guided to be approximately 11% lower due to the maturing smartphone market. Apple is a victim of its own success, as the iPhone has made it a bit of a one-trick pony. Of course, there may be some exciting things in the pipeline such as virtual reality application or even an Apple car, but we haven't seen enough evidence yet. 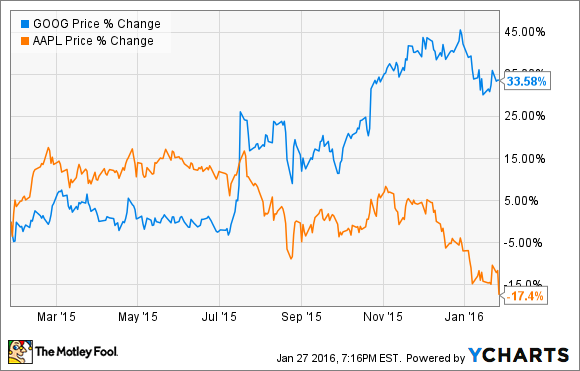 Alphabet, on the other hand, is investing in all kinds of seemingly unrelated projects. A recent article at ars technica shows the incredible array of things Alphabet is researching, from drones, virtual reality, and health monitoring to self-driving cars and even anti-aging initiatives. Some may think this is wasteful spending, but it certainly allows for potential revenue diversification, and if anything is known about the tech world, it's that the next big thing often comes out of unexpected places. These are also the types of discoveries that could put Alphabet in a league of its own. Rather than just working on tweaking existing products, it is looking toward entirely new categories and applications.

To put some numbers on it, we can look at the amount Apple spends on research and development compared with Alphabet. Over the past five fiscal years, Apple has spent $24.4 billion on R&D -- nothing to sneeze at, but Alphabet spent $33.5 billion, or 37% more. Further, Apple spends only around 2%-3% of its revenue on R&D, compared with 13%-15% for Alphabet.

Apple is no longer a growth company
People are used to thinking of Apple as always putting up monster numbers each year, but the company's success has made it so big that it's getting hard to move the needle. Revenue growth estimates for Apple this year and next are only 1% and 6%, respectively, and earnings growth estimates are similarly in the single digits for the next two years. Single-digit growth numbers are usually reserved for boring staples companies, not innovative tech companies.

Even as a tech hardware seller, Apple previously put up huge growth numbers as it introduced revolutionary products over the years. First there was the iPod, then the iPhone, then the iPad. Investors had high hopes for the Apple Watch, released last year, and although it has done well, it hasn't become a blockbuster to take over the slowing growth of the iPhone yet. The Watch is included in the "other" revenue category, which last quarter only made up 6% of revenue, albeit it is a category that is growing fast, so there could be hope.

Alphabet, on the other hand, has shown robust growth that looks to continue in the future. Revenue is estimated to grow 32% this year and 16% next year, according to analysts, with earnings expected to grow 16% and 18%, respectively, as well.

This isn't to say Apple is a "bad" investment. Far from it -- it's currently a cash cow, returning capital in the form of dividends and share repurchases. The dividend yield for Apple is not-too-shabby at over 2%, in addition to the over $35 billion spent on buybacks last year. Alphabet on the other hand pays no dividend, and only late last year announced a small buyback program.

These factors clearly show how far Apple and Alphabet have diverged: Apple's growth has slowed dramatically and the company is now focusing on returning capital, while Alphabet is still growing at double digits and hasn't really flipped the capital return switch yet. The divergence is further illustrated in their valuation as the market isn't interested in paying more than 10 times earnings for Apple, but is willing to shell out 30 times for Alphabet.

I believe this difference is because Apple is quickly becoming a mature, cash-generating company. There is absolutely nothing wrong with this -- it is largely the result of Apple's success -- and every company would dream of getting to this point. Further, Apple may come out with a new product that blows everyone away. If so, I'll be the first to change my mind. But my point remains, currently Apple no longer looks like a long-term growth investment, and if I had to choose a large-cap company that also had high growth prospects ahead, I would take Alphabet over Apple.

Suzanne Frey, an executive at Alphabet, is a member of The Motley Fool's board of directors. Chris Kuiper has no position in any stocks mentioned. The Motley Fool owns shares of and recommends Alphabet (A shares), Alphabet (C shares), and Apple. Try any of our Foolish newsletter services free for 30 days. We Fools may not all hold the same opinions, but we all believe that considering a diverse range of insights makes us better investors. The Motley Fool has a disclosure policy.