Please ensure Javascript is enabled for purposes of website accessibility
Log In Help Join The Motley Fool
Free Article Join Over 1 Million Premium Members And Get More In-Depth Stock Guidance and Research
By Andrés Cardenal, Tyler Crowe, and George Budwell - Jan 30, 2016 at 9:20AM

Dividend stocks be very profitable investments; however, you should stay away from these particular names.

Most investors love dividend stocks, and for good reasons. Statistical studies have proven time and again that investing in companies with strong dividends can be a powerful strategy to achieve superior returns from your portfolio over the long term.

However, not every dividend stock is necessarily a good investment. Investing in companies with deteriorating fundamentals can be an expensive mistake, even if the stock is is paying an attractive dividend yield. With this in mind, in the roundtable below, our contributors highlight three dividend stocks to avoid.

Andres Cardenal: Philip Morris (PM -0.23%) owns the international rights to the enormously valuable Marlboro cigarette brand. Tobacco is a remarkably profitable industry, consumers are notoriously loyal to their favorite cigarette brands, and tobacco consumption in international markets is generally stronger than in the U.S.

Philip Morris has raised its dividends in each and every year since the company was separated from Altria via a spinoff in 2008. What was a quarterly dividend of $0.46 per share back then has now turned into a much bigger $1.02. Even better, at current prices, Philip Morris pays a smoking-hot dividend yield of 4.7%.

Nevertheless, I would still avoid Philip Morris stock as if it were a pulmonary disease. Industry sales volumes are declining over the years, and there is no reason to expect any reversal in the trend. In fact, Philip Morris is expecting the decline in industry volume excluding China and the U.S. to be around 2.5% during 2015.

The company has been able to buffer this problem with rising prices and strict cost discipline over the years, but this is hardly a sustainable strategy to continue raising dividends in the long term. Philip Morris stock has a dividend payout ratio above 90% of earnings forecasts for 2015, so the company really needs to find a viable strategy to increase sales and  earnings if it's going to continue raising dividends in the future.

George Budwell: Although PDL BioPharma (PDLI) offers a monstrous 19% yield at current levels, investors would be wise to remain on the sidelines with this risky stock because the sustainability of its dividend is in serious doubt right now.

The first issue to understand is that PDL's ginormous yield is largely a by-product of its crashing stock price. Over the past year, for example, the company's shares have shed over 60% of their value, according to data provided by S&P Capital IQ: 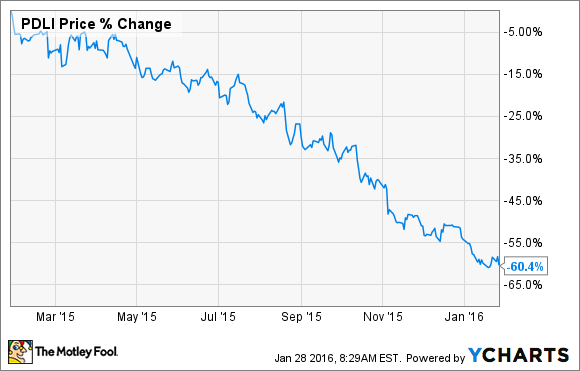 Now, the underlying reason behind this staggering decline is also cause for concern. Specifically, PDL's shares have been plummeting as a result of the expected drop-off in royalty payments this year from the company's Queen patents, which cover several blockbuster drugs like Avastin and Herceptin. In fact, the Street has PDL's annual revenue dropping by a staggering 60% in 2016.

While PDL has attempted to expand its royalty base beyond the Queen patents in recent years, the fact of the matter is, the company simply isn't ready to transition away from this revenue source at this stage. As a result, PDL appears ripe for a major reduction in its dividend this year, which certainly won't help its share price rebound from this year-long nosedive.

Tyler Crowe: Looking across the energy landscape right now, it's littered with companies that are high-yield "opportunities." One company looking particularly questionable right now is Energy Transfer Equity (ET 1.57%) and its 11.5% dividend yield. This dividend has become so questionable as of late because it's in the middle of trying to acquire Williams Companies (WMB 0.65%), which just had its credit rating downgraded to junk status and sports its own shaky dividend yield of 12.7%.

Both Energy Transfer and Williams Companies were some of the faster-growing pipeline companies in the space in recent years, and investors were wooed to these stocks with multibillion-dollar growth plans that were slated to last for several years. However, to make that growth happen, both companies and their subsidiary partnerships need access to capital through either the debt or equity markets. With dividend yields at all of the Energy Transfer and Williams entities at or above 10%, it makes funding through issuing new equity too expensive. Similarly, these two companies have debt levels so high right now, they're all at risk of compromising their credit ratings.

Keep in mind when looking at those numbers that ratings agencies typically want to see a debt to EBITDA ratio of 4.5 times or less for an investment-grade rating. So, all of these companies are well above that and could deteriorate even more as low oil and gas prices lead to lower operating profits on their non-fee based services. To add a cherry on top of this unappetizing sundae, more than 20% of Williams Partners' revenue comes from one customer: Chesapeake Energy. This adds an even higher amount of speculation since Cheasapeake itself is dealing with its own debt issues.

All of these things suggest that sooner or later, these companies are headed for a dividend cut, so investors should steer clear of these high yields until management teams at these companies take some prudent measures.