Please ensure Javascript is enabled for purposes of website accessibility
Log In Help Join The Motley Fool
Free Article Join Over 1 Million Premium Members And Get More In-Depth Stock Guidance and Research
By Jason Hall - Jan 30, 2016 at 9:02AM

The company continues to lead with efficient operations that are second to none in the railroad industry.

Even as the demand environment continued to be weak, with carloads of coal, petroleum products, metals, and minerals all declining in the fourth quarter, Canadian National Railway (CNI -0.34%) still managed to report nearly flat revenue and 15% growth in earnings per share. For the full year, the railroad saw this weak demand, but pushed profits up 12% on the back of industry-leading operational efficiency, the benefit of falling fuel prices, and focus on long-term growth in intermodal, and strong current demand for automotive and wood products.

Will a weak rail market catch up to Canadian National, or can it keep outperforming the negative trends affecting its peers? (Note: All dollars reported in this article are Canadian dollars.)

The numbers
For the fourth quarter:

As a comparison, competitors CSX Corporation (CSX 0.12%) and Norfolk Southern Corp. (NSC 0.07%) also recently reported earnings. Both saw profits fall in the quarter, with CSX reporting a 5% decline on a 13% drop in revenue, while Norfolk Southern's profits fell 29% on a 12% decline in revenue.

All three reported volume declines, as demand for commodities such as coal, crude oil, iron ore, and steel remains weak.

What happened in the quarter
The weakness Canadian National reported in commodity shipments such as coal, oil, minerals, and metals like steel and iron has been going on all year, but at the same time, carloads of automotive and intermodal shipments increased:

Intermodal alone accounts for nearly one-quarter of Canadian National's revenue ton-miles, so its growth helped balance the declines in oil and coal. This wasn't by accident, as Canadian National is investing big to expand its intermodal capacity both on the Canadian west coast near Vancouver, BC, and the U.S. gulf coast in Mobile and New Orleans, with the massive expansion of the Panama Canal set to open this summer.

Another area which has shown strength and could gain steam is forest products, particularly lumber for the construction industry. U.S. housing starts have been steadily trending up for a few years after bottoming in the financial crisis, and have just returned to historical norms. Furthermore, infrastructure and commercial construction are set to recover as well, further adding to demand for these major Canadian exports to the U.S.

But the real key for Canadian National remains its industry-leading operating efficiency. Here's a comparison between it, CSX, and Norfolk Southern:

Challenges likely to continue, but there's big long-term upside
It's not likely that the current weakness in coal or oil is going to change anytime soon. Canadian and U.S. oil producers which rely on rail shipment have slashed their capital spending over the past year, and that will mean less oil being produced and shipped by rail. At the same time, coal seems to be in a secular decline that's unlikely to reverse. Natural gas has become cheaper and is plentiful, and regulatory pressure on utilities to reduce emissions also leans in natural gas' favor.

Iron and steel are a question that will take some time to answer. North American steel producers are in a fight against what they are calling illegal "dumping" by state-owned foreign steelmakers that have been subsidizing their steel production to prop up those industries overseas. There have already been some tariffs passed in the U.S., but so far imports haven't fallen. And while that imported steel does get moved via rail from ports, it undercuts domestic iron and metallurgical coal, key ingredients for steel manufacturing and products Canadian National ships.

At the same time, Canadian National continues to invest on more intermodal demand, and those investments are set to pay off soon. Chief marketing officer Jean-Jacques Ruest said on the earnings call that the Mobile expansion is expected to start bearing fruit as soon as May or June.  There are also tailwinds in wood products for the ongoing construction recovery, and increased automotive shipments have helped fill the gap in weak commodity shipping over the past year.

Canadian National looks undervalued and worth buying today
While the benefit of foreign exchange has boosted the company's bottom, Canadian National is simply in different tier than its competition when it comes to efficient operations. Furthermore, the railroad's investment in long-term growth is the kind of focus that will pay off for years to come, and this is especially important with uncertainty around the long-term sustainability of coal and oil shipments.

This low-cost and forward-thinking approach to running the company has allowed Canadian National to consistently invest in growth, and to give more capital back to shareholders at the same time. The company also announced it would increase the dividend by 20%, and said it was looking to buy back $2 billion in shares this year. Over the past decade, share buybacks and dividend increases have added significantly to shareholder returns: 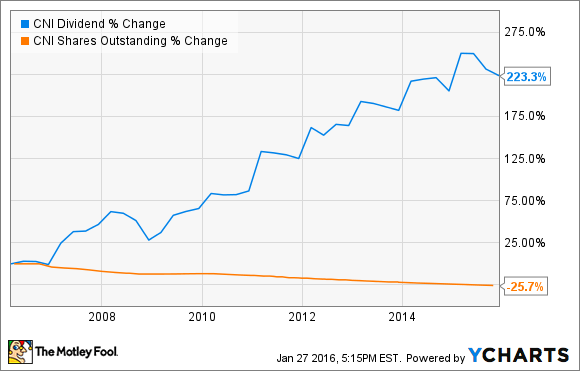 Jason Hall has no position in any stocks mentioned. The Motley Fool owns shares of and recommends Canadian National Railway. The Motley Fool recommends CSX. Try any of our Foolish newsletter services free for 30 days. We Fools may not all hold the same opinions, but we all believe that considering a diverse range of insights makes us better investors. The Motley Fool has a disclosure policy.