Please ensure Javascript is enabled for purposes of website accessibility
Log In Help Join The Motley Fool
Free Article Join Over 1 Million Premium Members And Get More In-Depth Stock Guidance and Research
By George Budwell – Jan 30, 2016 at 8:07AM

Bernie Sanders recently rolled out his Medicare for All proposal. A deeper look, though, suggests that his plan is far from mere extension of Obamacare.

The Affordable Care Act of 2010, or Obamacare, has surprisingly attracted staunch critics from both sides of the political spectrum. For instance, Republicans have attacked the healthcare law for being a step too far away from the country's capitalist roots, along with it being generally unaffordable. And some Democrats, like U.S. presidential candidate Bernie Sanders, have repeatedly stated that the act didn't do enough to provide affordable health insurance for low-income Americans.

Despite Obamacare bringing over 18 million Americans into the realm of the insured and lowering the country's percentage of uninsured from 18% in 2013 to around 12% today, Sanders has been calling for a radically different approach to providing affordable healthcare. Ahead of the fourth democratic debate, for example, Sanders rolled out a broad strokes version of his plan known as "Medicare for All."

With Sanders now in a dogfight with Hillary Clinton in the early primaries and caucuses, and sporting an edge over Republican front runner Donald Trump, according to various polls, voters would be wise to consider the ramifications of his Medicare for All proposal. After all, it's not simply an extension of Obamacare, but an outright replacement of the controversial healthcare law. Here's why.

Obamacare's middle path has had a mixed but tolerable impact on health insurers
Since Obamacare's implementation in 2013, top dogs in the healthcare insurance industry like Aetna (AET) and UnitedHealth Group (UNH 1.10%) have seen their top lines take flight, along with their share prices: 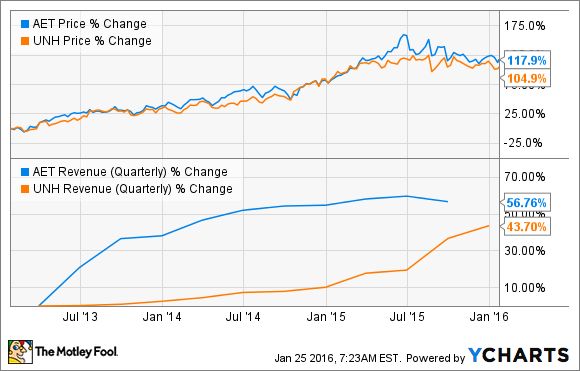 By mandating health insurance, Obamacare essentially created millions of new customers for Aetna and UnitedHealth over the last few years.

In the same breath, the public healthcare exchanges rolled out as part of Obamacare haven't been kind to either Aetna or UnitedHealth because of their unpredictability in terms of enrollment numbers and slim margins. In fact, UnitedHealth's CFO David Wichmann said during the company's first-quarter conference call that:

Turning to exchanges, we expect to start the year at around 700,000 or fewer public exchange members and expect these numbers will steadily decline over the course of the year. We are not pursuing membership growth and have taken a comprehensive set of actions to contain membership and sharpen performance over the balance of 2016.

Put simply, UnitedHealth is in the process of lowering its exposure to public healthcare exchanges because this business has been weighing down the company's profitability. Aetna's management echoed a similar sentiment on its most recent quarterly conference call, but also noted that the company is taking a long view toward public health exchanges at the moment.

The point is that, despite this mixed impact on the health insurance industry as a whole, the industry has grown substantially under Obamacare -- and even benefited the broader economy by creating new jobs in the healthcare sector.

At its heart, this Medicare for All idea is a call for a federally administered single-payer healthcare program. Under such a program, the U.S. government could either run the whole show itself, or contract out a portion of this work to private entities like Aetna and UnitedHealth.

However, the fact remains that these companies could see their employer-based insurance business take a major hit. After all, a single-payer system would likely mean tight price controls and razor-thin margins for the majority of the marketplace as a result -- regardless of whether the government or private companies performed the actual day-to-day work.

Making matters worse, some of the more extreme models outlining how to execute a single-payer healthcare system completely eliminate private insurers altogether, meaning these large-cap health insurance companies would see their main revenue source dry up overnight. Even so, this more aggressive approach toward universal healthcare appears to be the model that Sanders is actually targeting, according to the current incarnation of the proposal on his website.

Putting the doom and gloom aside for the moment, the one caveat is that a single-payer program could lead to say an expansion of highly profitable plans for private insurers like Medicare Advantage. If individuals wanted more coverage, for example, they might be able to buy a more comprehensive plan offered by a private insurance company, striking a much-needed comprise between public interest and the health insurance industry.

The bottom line is that Sander's Medicare for All proposal, as it currently stands, lacks critical details about its implementation, and therefore its feasibility. A Medicare for All proposal could either wreck havoc on the private insurance industry, or potentially expand the most profitable areas of the market to the benefit of private insurance companies. The devil is in the details.

Foolish bottom line
All things considered, a Sanders presidency would likely result in a gradual extension of Obamacare as a means of one day achieving a universal healthcare system -- not a total reboot. After all, his headline grabbing proposal for a single-payer healthcare system simply won't pass muster with the bulk of lawmakers.

At the end of the day, the U.S. remains heavily invested in a mixed private and public payer model, implying that a sudden shift to a federally administered health insurance platform -- especially one that minimizes or completely eliminates the role of private insurers -- would be a bridge too far for many stakeholders in the current system. Sanders, if elected, would therefore need to work within the confines of the current political environment to achieve his ultimate goal of extending health insurance coverage to the vast majority of Americans. And that means more Obamacare.

George Budwell has no position in any stocks mentioned. The Motley Fool recommends UnitedHealth Group. Try any of our Foolish newsletter services free for 30 days. We Fools may not all hold the same opinions, but we all believe that considering a diverse range of insights makes us better investors. The Motley Fool has a disclosure policy.