Chipotle Mexican Grill's (NYSE:CMG) "Food with integrity" motto has taken a serious beating since late 2015. And while it may seem as if the problems have gone on for much longer to shareholders who just want everything to go away, this will actually be the first quarterly earnings report that covers the first incident in late October.

Considering that the burrito slinger was already dealing with slowing same-restaurant sales growth before food-related illness hit stores in multiple states on both coasts, there has been a lot of fear driving the market for Chipotle's stock. Since around the time of the first reported incident, shares have fallen hard: 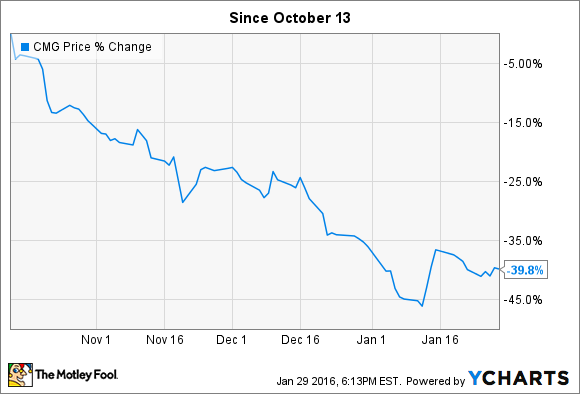 And while there's no doubt a market sell-off played some role in this decline, the underlying fear is that Chipotle may have a very hard time attracting -- or reattracting -- customers in the aftermath of the events of late 2015.

What can investors expect? It's hard to say, but there's more to the story than just Chipotle's three-month results that it will report on Feb. 2.

The impact on the business
The first E. coli outbreak occurred in Oregon and Washington state in late October, followed by a Norovirus outbreak in Boston in November. It's important to understand that while the E. coli outbreak was clearly a food-related thing, the Norovirus outbreak was related to a sick employee, not the company's food-handling protocols, or something that could have been prevented with better safety procedures.

But what matters here is that:

In other words, there's a big difference between the two outbreaks and the causes of them, but they're both Chipotle's problems to fix going forward.

And those problems look as if they could be big.

On Jan. 6, Chipotle submitted an SEC filing disclosing the impact of the food safety incidents on its business results, reporting that management expected to report that comparable restaurant sales -- i.e., sales at restaurants open at least one year -- would be down 14.6% in the fourth quarter. Comp sales for December were down more than 30%. This huge drop in sales is having a huge impact on operating margins. Management expects to see restaurant-level operating margins in the low 20% range for the quarter, which is down nearly one-third from the typical 28% and above levels the company has historically reported.

Combined, the decline in sales and operating margins is expected to produce earnings per share between $1.70 and $1.90 for the quarter. This would be less than half the $3.84 per share in profits produced in the fourth quarter of 2014.

Putting out the fire: 2016 will be about getting the customers back
At a recent presentation, company management made it clear that 2016 would be a challenging year, but that the focus will be on re-establishing trust, and bringing customers back to Chipotle's restaurants.

The company has already taken a number of major steps to implement processes to prevent foodborne illness outbreaks from happening in the future, as well as taking an unprecedented step to close every Chipotle location for an extended midday period on Feb. 8, to outline all of the steps the company has taken -- both in each restaurant as well as things outside the restaurant in supply chain and central kitchens -- with all of its employees.

The company has already implemented essentially all of its changes to its food-handling, prep, and storage, but it's clearly putting greater emphasis on making sure every employee hears the same message about food safety.

It's mainly going to just take time -- time with no more food-safety issues -- for Chipotle customers to come back. Management has been very clear it isn't counting on a quick bounce-back, instead having a patient approach and focusing on the long-term goals.

Looking ahead
Chipotle is almost guaranteed to have a pretty tough go of it over the next few quarters, but it's also not the first company that's ever dealt with these sorts of issues. Historically speaking, Chipotle management has done an incredible job of growing the business by focusing on what it can control, and on delivering high-quality food that customers love. It's now added "industry-leading food safety" to that list.

Now it's time to get to work. If the company can continue to execute as it has in the past, these recent incidents will probably be just a blip on the radar years from now.