The home has always been Amazon's bread and butter. As it evolves, so will the retail king.

Amazon.com ( AMZN -1.38% ) has fought a long and bloody battle to establish its kingdom over retail, dethroning Wal-Mart and leaving untold casualties in its wake. Despite a disappointing miss on its Q4 earnings, the company collected an astonishing $0.51 of every $1.00 in e-commerce growth in 2015 -- the majority of the entire industry. Moreover, a projected half of U.S. households now subscribe to the company's Prime service, according to a new report from CIRP, cementing Amazon as the instinctive first choice for online shoppers.

Nevertheless, with still only 7% of all retail spending occurring online, Jeff Bezos' hydra is hungry for growth -- actively expanding its consumer initiatives to include music and video streaming, grocery delivery, and same-day shipping in hopes of permeating deeper into more facets of daily life. With technology altering those facets at an accelerating rate, Amazon is recognizing that it must adapt to maintain its blazing pace.

The smart home is undoubtedly shifting consumer behavior as it grows more connected. Projected to reach over 24 million households by 2020, it provides an enormous retail opportunity for Amazon, whose growth depends on reaching customers in new ways. It also pits the retail king against juggernauts such as Apple ( AAPL -1.17% ) and Alphabet's ( GOOG -0.87% ) Google in the mounting fight for a presence in the connected home. Unfortunately for them, Amazon has been quietly unfolding a strategy to bypass its competition entirely, and almost nobody is noticing. 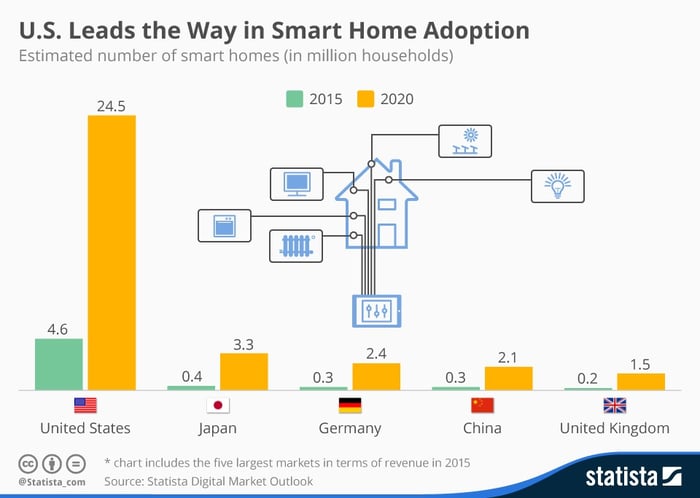 Designed around the voice, Amazon's Echo is hands-free and always on.

Amazon enters the home with Echo
Amazon first targeted the smart space with the Echo -- a multifunction home speaker that, while initially suffering criticism around its practicality (not unlike the Fire Phone), acts more like a capable virtual assistant with each software release. Alexa, the artificial intelligence built by Amazon to power Echo, can stream music from various services, update your calendar, or pull sports scores and restaurant recommendations for you.

But the Echo's fastest-growing use case is as a voice-activated hub to control your smart home. What makes it stand out from the competition is Alexa's powerful voice recognition capabilities -- something Amazon has worked very hard to make best in class, and for good reason.

Voice has already become the simplest method for running common smartphone tasks -- setting quick reminders or asking for directions without unlocking and navigating the device. It's the most natural and reflexive human medium for communication; untethered and hands free, voice doesn't require you to set down your bags, wash your hands, or jumble through your pockets to use your phone.

As language processing continues to improve, it becomes easy to envision having speech replace screens as our primary interaction point with devices, especially those powering our homes. Home appliance and device-makers have recognized this, and they're actively engaging with Amazon and Echo to take advantage.

Apple's Siri can also control certain devices by voice, but it's hindered. Unlike Siri, Echo doesn't require an iPhone or commitment to the Apple ecosystem -- both expensive or inconvenient propositions for many potential users. More importantly, Echo was specifically engineered to be centralized and dedicated to the home. Always on and always listening, it is almost human in nature -- which is exactly what one would want from a practical smart home.

Still, even with Alexa's voice capabilities, the pace at which the smart home and its growing consortium of devices is evolving makes it increasingly difficult for a single device like the Echo to fight its way into a significant share of homes. Fortunately for Amazon, it recognized this challenge early and has much larger intentions.

The Echo was only a piece of the puzzle -- Alexa is the bigger picture
In June of last year, Amazon quietly announced that it would release the Alexa Skills Kit to smart home developers, allowing them to integrate the entirety of Alexa -- her voice activation, speech recognition, and language processing abilities -- directly into their devices with no Echo required, entirely for free. Developers could now harness Alexa with their devices and appliances, allowing users to interact with them just like they would the Echo.

These partnerships appear conflicting at first, as Amazon could be seen as a direct competitor, but they become more intuitive when recognizing one key point: Developing an artificial intelligence capable of understanding human speech is a monumentally expensive and time-consuming endeavor. It becomes easier to see the appeal on both ends.

Instead of developing their own proprietary AI to bolster their smart home ecosystem, third parties can simply use Alexa -- right out of the box, and for free. In return, Amazon is establishing Alexa as a voice to connect the smart home -- a virtual hub able to connect more and more devices in an industry that is ironically disconnected. As other players battle between countless smart home standards such as Apple's HomeKit or Google's Brillo, Amazon is bypassing that route entirely and doing what it does best -- extending its reach into your home.

Amazon's low-key strategy finally began showing signs at the 2016 Consumer Electronics Show this January. The company didn't formally attend CES, but symbolic of that strategy, its presence was heavily felt as a flock of companies announced they would be integrating their devices with Echo. Even more noteworthy were that other smart home companies with their own ecosystems, such as Vivent, Nexia, and Alarm.com, announced Echo integration. (Samsung's SmartThings platform also integrated with Echo last August.)

But while these new partnerships do much for extending Amazon's reach into the home, they still require an Echo to work, a $180 purchase not every homeowner will want to make, and a hurdle the company must overcome. So perhaps the most important product for Amazon to come out of CES this year was the Triby, a simple family-friendly connected speaker that can stream music and make hands-free VoIP calls. It's the first third-party device to fully utilize Alexa without requiring an Echo. The importance cannot be understated -- Amazon is automatically connected to Triby owners from the moment they set up their device, whether they realize it or not.

One of the biggest announcements from CES 2016 came from Ford, which will be integrating Amazon's Alexa directly into its cars.

More big names will probably follow suit as they recognize the growing necessity of connecting to the smart home, helping further spread Amazon's reach in the process. But as Amazon's presence within the home continues to flourish, the focus now turns to how the company stands to profit.

How Amazon is already monetizing the smart home
Last March, Amazon announced Dash Replenishment Services (DRS), allowing smart home manufacturers to program their devices to connect with the Amazon store to automatically reorder any parts or supplies needed as they begin running low -- think water pitchers that can reorder filters, pet feeders that can reorder kibble, printers that can reorder ink, and so on. The benefits of DRS for all parties are obvious -- greater convenience for the consumer, and additional and predictable revenue for Amazon from untapped channels.

Shortly after, Amazon announced the Alexa Fund, aiming to invest up to $100 million to "fuel voice technology innovation." Yet the fund's dozen investments seem to tell another story. Amazon has invested in companies such as Sutro (which produces a smart pool monitor able to automatically reorder cleaning chemicals using DRS); or Petnet (which produces a smart pet feeder that can reorder your preferred kibble when it's low, also through DRS). None of these companies, or the 10 others Amazon has invested in through the Alexa Fund, appears to promote the stated mission of fueling voice innovation -- but that was never the point.

The household has always been Amazon's bread and butter, but the home is changing -- growing more interconnected and interactive every day -- and with that, consumer behaviors and buying habits will change too. This presents untold commercial opportunity for companies like Amazon, but not without adapting to this change. Although Amazon wants to be everywhere, it has recognized it cannot win the battle for the smart home alone. By investing in and open-sourcing Alexa, the company is converting potential competitors into valuable partners.

Amazon is using those partnerships with Echo, Alexa, and initiatives such as Dash to architect dynamic avenues into the devices that will surround and interact with us every day. Devices that could collect mountains of valuable data on user behavior. Devices able to influence our spending habits. And devices that will automate our household purchases. Purchases that will go directly through the marketplace you know and love -- Amazon.com.

Herein lies Amazon's strategy. The company has long fought to ingrain itself into the fabric of our lives, aiming to becoming a reflex for consumers, something we subconsciously just use to buy things. With the smart home, Amazon has the opportunity to greatly advance those efforts, and it most certainly intends to.