What: bluebird bio (NASDAQ:BLUE) ended up 10.6% on Monday in a surge that didn't seem to have any news behind it.

So what: Double digit moves usually don't happen by accident, but keep in mind that bluebird bio was at this level as recently as last Wednesday. Like most biotechs of late, bluebird bio's volatility has been off the charts. It seems like investors fall in and out of love with the sector on a daily basis. 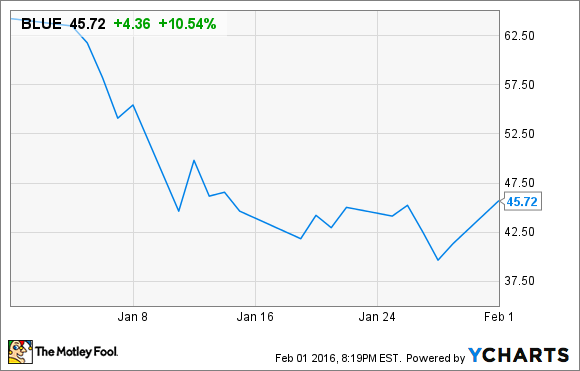 There were a couple of Form 13Fs filed that showed funds had purchased shares of bluebird bio. But investors shouldn't be buying because funds purchased shares sometime during the last quarter.

The fact that bluebird bio has rebounded could mean that it's reaching a floor. The company ended the September with over $700 million in cash and short term investments, so at a market cap of $1.7 billion, investors are only assigning a $1 billion value to the pipeline.

Now what: Unfortunately, bluebird bio has limited upcoming catalysts to get the company trading on fundamentals rather than sentiment about the industry. The next data update for bluebird bio's LentiGlobin gene therapy treatment for beta-thalassemia and sickle cell disease isn't expected until the American Society of Hematology meeting in early December. We will get an update in April on bluebird bio's treatment for childhood cerebral adrenoleukodystrophy using a related gene therapy called Lenti-D, but the LentiGlobin treatment has a bigger potential market and is rightfully what investors are most focused on.